Starbucks 'Race Together' Initiative Is Brilliant

Starbucks CEO Howard Schultz has been one of the boldest thinkers and creative strategists of the last 20 years. From the very beginning, Schultz and Starbucks have sought to change the market for coffee, starting with the simple notion that Starbucks could become the “third place,” where customers could go to relax, meet friends, and enjoy a special cup of coffee (at a huge premium price) outside of their homes or work.

Schultz also made the bold move to expand aggressively overseas, focusing heavily on emerging markets rather than mature coffee-drinking locations. When Starbucks went to China, many observers were skeptical because China was a tea drinking culture. Yet, China became a huge success for the company as it convinced more and more people to fall in love with the Starbucks experience.

On Sunday, Schultz announced a new initiative that will encourage Starbucks’ baristas to write “Race Together” on their customers’ cups to foster “an opportunity to begin to re-examine how we can create a more empathetic and inclusive society.” In other words, discuss race.

If executed carefully, this could be another brilliant move by Schultz. As we write in our new book, Strategy Rules: Five Timeless Lessons from Bill Gates, Andy Grove, and Steve Jobs, a great strategist “looks forward” to determine where he wants his company to be at a given point in the future and then “reasons back” to identify the moves that will take the business there. Schultz understands that the country is divided today by issues of race. Starbucks’ future depends heavily on an America in which the “third place” is a location where the entire population can comfortably gather. Why not over coffee?

Moreover, we argue that great strategists are able to anticipate customer needs, not just respond to them. Steve Jobs was a master of this art. Jobs famously said, “Some people say, ‘Give the customers what they want.’ But that’s not my approach. Our job is to figure out what they’re going to want before they do. I think Henry Ford once said, ‘If I’d asked customers what they wanted, they would have told me, “A faster horse!”’” Schultz would appear to be taking a page out of Jobs’s book. He has a gut feeling that customers want to talk about race, and he believes that Starbucks’s baristas can help initiate a cathartic conversation, making Starbucks the modern town square. Schultz anticipates that his customers will embrace the opportunity to talk.

Ultimately, of course, the success of this initiative will lie in how it is executed. As we argue in Strategy Rules, “to become a great strategist, you must turn your vision and high level ideas into tactics, actions, and organizations that reach the customer.” While the concept has enormous appeal, the danger in this strategy is that discussions become controversial, polarizing, and destructive to Starbucks’ business. Never mind that hot coffee might go cold. Historically, managing execution at the store level has been one of Schultz’s great strengths: when the company was struggling in 2008, he made the bold decision to shut 7,100 stores to re-train 135,000 baristas how to re-connect with his customers. That move paid off, with dramatic improvement in customer satisfaction.

If he can similarly train his baristas how to manage the inevitable challenges of discussing race relations, Schultz may do service to his country while simultaneously strengthening Starbucks’ brand, customer experience, and, ultimately, the bottom line. 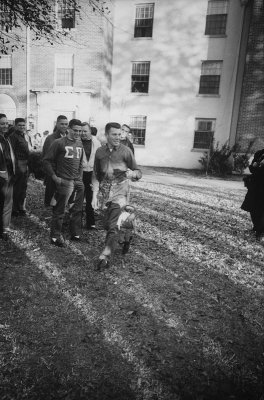 The Historical Roots of Fraternity Racism
Next Up: Editor's Pick