The Twizzler Challenge Might Be the Next Ice Bucket Challenge

After the ALS Ice Bucket challenge raised more than $115 million in mere months, many speculated the viral campaign had forever changed the face of charitable fundraising. Almost a year later, the Today Show thinks it may have found a successor.

On Tuesday, hosts Matt Lauer and Kathie Lee Lady and the Tramp-style chowed down on two sides of a Twizzler in the name of autism awareness (and fundraising).

While the viral stunt may be more cool weather appropriate than dumping a bucket of ice water on your head, it will probably hold less appeal for germaphobes.

It all started when Bleacher Report writer Fred Katz tweeted that MSNBC and Today Show co-host Willie Geist share a Twizzler with Orange is the New Black star Uzo Aduba during Comedy Central’s “Night of Too Many Stars: America Comes Together for Autism” to raise money.

The two followed through and then Geist continued the #TwizzlerChallenge with Meredith Vieira on her show, challenging Matt Lauer and Kathie Lee, Chis Soules and his fiance Whitney of The Bachelor and Billy Bush and Kit Hoover.

While the challenge hasn’t gained traction yet, it should be noted that Matt Lauer was also ahead of the curve with the Ice Bucket Challenge. He doused himself in cold water in mid-July, and it didn’t gain true social media virality until mid-August.

The Today Show hosts challenged Jon Hamm and John Slattery to do the Twizzler Challenge for autism when they appear as guests March 23.

Hopefully neither of them has a cold. 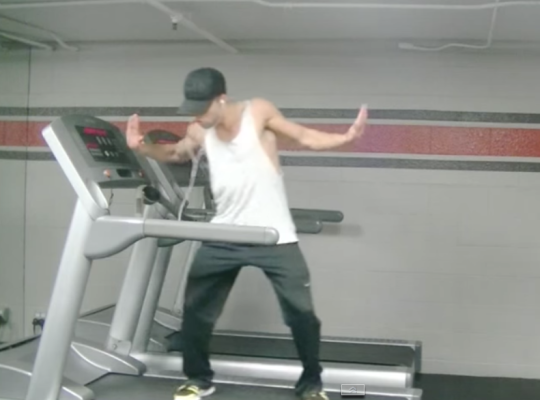 Watch This Guy Perform an 'Uptown Funk' Dance Routine on a Treadmill
Next Up: Editor's Pick