Lack of Ebola Cases Shifts Vaccine Trials Away From Liberia

A man walks past an ebola campaign banner with the new slogan "Ebola Must GO" in Monrovia, Liberia on Feb. 23, 2015.
Zoom Dosso—AFP/Getty Images
By Alexandra Sifferlin

The National Institutes of Health (NIH) may relocate its clinical trials of Ebola vaccines to Guinea, since there are no longer enough Ebola cases in Liberia for a proper efficacy trial.

On Feb. 2, the NIH launched an initial safety trial for two vaccines to protect against Ebola in Liberia. The plan was to test 600 people for overall safety and then launch a second phase of the trial in 27,000 people to see whether or not the vaccine prevents infection with Ebola virus compared to a placebo.

The safety test was successfully completed the week of March 9—but around the same time, Liberia announced that it had released its last confirmed patient from its Ebola treatment centers. The West African country began the count to 42 days without new cases, at which point it can declare itself Ebola-free. That’s great news for ending the outbreak, but it poses a problem for Ebola vaccine trials.

Now that Ebola is not the risk it was to Liberia several months ago, the trial is unlikely to continue according to the original plan. “It doesn’t make sense to expand the study in Liberia when there are fortunately no new infections occurring,” says Dr. H. Clifford Lane, the deputy director for clinical research and special projects at the National Institute of Allergy and Infectious Diseases. “We need to be sure we enroll a population that is still at risk for Ebola virus infection so we can show the protective effect of either or both of the vaccines.”

Lane says the NIH is now in discussions with other countries, predominantly Guinea, to move the second part of the trial.

When asked if there is any fear that the trial could be cancelled due to lack of cases, Lane said, “I hope not.”

Lane says the reason the NIH is concentrating more on Guinea than Sierra Leone—the country hardest hit by the outbreak—is that there are already several large-scale vaccine trials unrolling in the country compared to Guinea. “I think the greater opportunity is [in Guinea] because there isn’t as much going on with vaccines,” he says.

“I hate to give a timeline, only because it never comes out that way, but we have to move quickly if we hope to get a result,” he says. “I actually hope the standard control measures will begin to show results in both of the countries that still have cases.”

On Thursday, the World Health Organization (WHO) reported that deaths from Ebola in Liberia, Sierra Leone and Guinea have surpassed 10,000, and total cases number more than 24,500. The NIH also announced that an American healthcare worker who was volunteering in Sierra Leone tested positive for Ebola and arrived on Friday for treatment in the NIH’s specialized unit in Bethesda, Maryland. 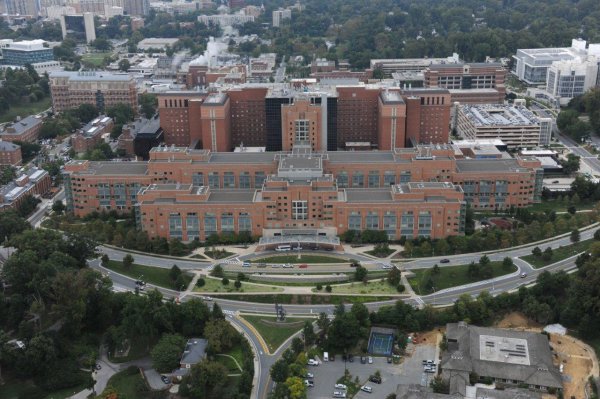 Ebola Patient Returns to U.S.
Next Up: Editor's Pick