Use This Ingenious Trick to Choose the Right Apple Watch Size

By Matt Vella
Gif by Lon Tweeten for TIME

Apple’s “Spring Forward” event on Monday answered a lot of questions about the company’s upcoming smartwatch. CEO Tim Cook revealed how much the various models will cost, ranging from $349 to $17,000, what the device’s various apps can do, and when it will be available for purchase (April 24).

One of several surprises was a slight price difference in the two planned body sizes of the Watch, which will come in 38-millimeter and 42-millimeter variants. After last year’s unveiling, many onlookers assumed the two versions were more or less women’s and men’s editions and would likely be priced according the material they’re made of and the accessories they come with. Instead, an entry-level 38-millimeter Apple Watch Sport costs $349 compared to $399 for the 42-millimeter version, for example.

The difference is negligible, but might become a deciding factor for some consumers. Apple will accept pre-orders for the device starting April 10 and said it would schedule in-store fittings to help customers decide which watch suits them best. This is going to be the best way to find the right device. The company is also providing life-size version in its Apple Store app for iOS devices.

But what if, you know, you simply can’t wait or don’t want to hold your phone in front of your wrist? Here’s a one-dollar hack that shows you (approximately) what the dimensions of the smaller Apple Watch are. Fold a bill (U.S. currency) as directed below and you can get a quick approximation of which size will look best on your wrist. Enjoy. 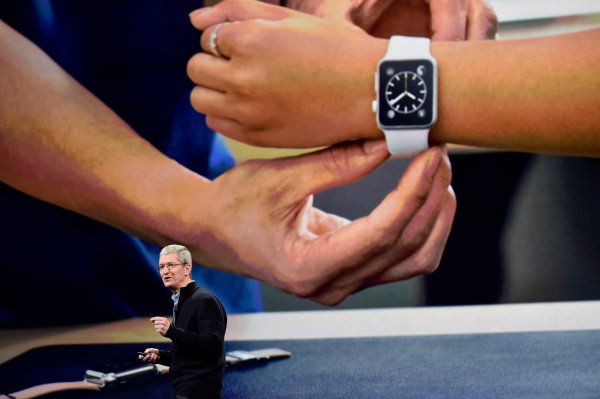 Apple Watch Accessories Are Crazy Expensive
Next Up: Editor's Pick