The Hunting Ground Reignites the Debate Over Campus Rape

The debate over how to prevent and investigate sexual assault on campuses has been waged for over a year now with lawmakers like Senator Gillibrand calling sexual assault on campus an “epidemic,” and the White House threatening colleges and universities with sanctions for not following reporting and adjudication guidelines. More than 100 colleges are now under investigation for possibly violating federal laws that aim to keep students safe. But just as campuses have entered a new semester, and the protests seemed to be dying down, a provocative new documentary called The Hunting Ground is pouring gasoline on the debate.

The film, which premiered at the Sundance Film Festival in January, hit theaters in New York and Los Angeles last weekend and will go on a tour of college campuses as it is rolled out across the country. It’s already causing controversy, with advocates saying it sheds a much-needed light on the way colleges cover up rape on campus and critics accusing the filmmakers of fear mongering and advocating for a radical adjudication procedure that ignores due process for the accused. Bringing the story to campuses where students are carrying mattresses to protest what they say is administrations’ indifference to victims of assault is sure to incite a whole new round of anxiety over the issue.

The Hunting Ground filmmakers spare no one in their crusade to stop assault on college campuses. In an interview with TIME, they critiqued the fraternity system, university officials who protect athletes accused of attacking women, politicians advocating for arming women on campus and even the White House for what they believe to be an insufficient campaign to keep students safe.

Back in 2012, the issue of campus safety not yet hit the covers of magazines like TIME, and it certainly wasn’t on the radar of filmmakers Kirby Dick and Amy Ziering who were then traveling across the country to screen their Emmy-award winning documentary on sexual assault in the U.S. military, Invisible War, a film that former Secretary of Defense Leon Panetta credits with inspiring him to take action on the issue which resulted in changes in the way that assaults are prosecuted in the military.

But as they toured campuses, they kept hearing the same message: “This happened to me, too. What’s happening in the military is happening at my school.” And it was clear to the filmmakers that, like in the military, schools were not doing enough to help these women. Only 41% of all universities initiated an investigation into sexual assault claims in the last five years, according to a Senate survey.

“We felt we’d received this call we had to respond to,” says Ziering. What result is a searing portrayal of a university system that the filmmakers say failed to create a safe environment for students and hid cases of sexual assault brought to their attention. By presenting dozens of first-hand accounts—they interviewed more than 100 survivors—Dick and Ziering hoped to personalize the conversation around campus rape in the same way that they did the debate about assault in the military.

They say their mission began with disproving the perception that campus rapes are just drunken hookups that one party regrets the next morning. “In so many of these situations, there was a predator at work. These survivor was picked out, plied with alcohol and set up to be assaulted,” says Dick. “And then the school’s response was often unsupportive of the survivor. First, victim blaming, and then the investigation that followed was either inadequate or didn’t happen at all.”

To make their case, Dick and Ziering tracked down someone rarely heard from in this debate: a convicted rapist. The man, whose face is blurred out, describes the ease with which he and fellow college students would deploy alcohol as a weapon to incapacitate girls and assault them.

“We felt it was important to include the mindset of a rapist who describes the ways in which these crimes are premeditated and highly calculated by serial predators,” says Ziering. Research indicates that only a small percentage of men commit these crimes, but that assailants attack an average of six victims.

The stories Dick and Ziering heard often shared the same setting—fraternities. Of the thousands of insurance claims that are made against fraternities each year, those for sexual assault are the second most common. The issue is so dire that some schools, like Dartmouth College and University of Virginia, have gone as far as to ban alcohol (or at least kegs and hard alcohol) at frats.

The filmmakers, while acknowledging that fraternities can be a productive part of campus life, accuse national chapters and colleges of condoning a culture often taken advantage of by predators. “The problem is that when you go on campus and you start asking where are the problem houses, where the sexual assaults happen, within a half an hour, you get that answer from a student,” says Kirby. Several interviewees in the film highlight one fraternity in particular— Sigma Alpha Epsilon, which they say is known on many campuses as “Sexual Assault Expected.”

“If the students know, the administration must have known for a long, long time,” adds Kirby. “Why aren’t they warning students? Or parents?” In the film, one school does send a letter to incoming freshmen warning them about a frat that has been sanctioned for assaults committed by its members. After backlash from the fraternity brothers’ parents, the school stops sending out warnings.

TIME reached out to Sigma Alpha Epsilon’s national chapter for a response to these claims. They wrote: “We believe anyone who commits sexual assault or other illegal acts should be held accountable and face punishment that is appropriate for those actions…Moreover, sexual assault is an issue related to all college students not specifically to fraternity men.” Brandon Weghorst, Director of Communications, also pointed out that SAE offers education and training on how to stop sexual assault.

The filmmakers also highlight similar issues with college athletics. The documentary follows the campus adjudication process for a handful of women, including Erica Kinsman, a former Florida State University student who claims that Jameis Winston, the likely no. 1 pick in the next NFL draft, raped her. Winston was never charged by the police and was cleared of violating the school’s code of conduct in December. Kinsman claims that FSU protected Winston while she had to endure the death threats from FSU football fans throughout the state. She has since sued the school and switched colleges.

A similar claim is made in the film by a campus investigator at Notre Dame, who says that administrators told him he could not reach out to athletes or coaches to locate a football player accused of sexually assaulting another student. The film notes that presidents and provosts at FSU, Notre Dame, and several other schools in the documentary declined to be interviewed for the film.

MORE Some Rules About Consent Are Unfair to Male Students

The filmmakers assert that some university administrators have been reluctant to bring the assault numbers to light because doing so could damage the reputation of the school. It’s an accusation echoed by some lawmakers: “The current lax oversight has the perverse effect of incentivizing colleges to encourage non-reporting, under-reporting and non-compliance with the already weak standards under current federal law,” Senator Gillibrand wrote in TIME.

Many schools fire back that giving the benefit of the doubt to the victim would undermine due process and lead to wrongful expulsions in cases where there’s little evidence. And while going to the police is an option, starting a criminal investigation, advocates argue, can be a lengthy process that can leave the victim to face-to-face with their accused attacker in dorms or classrooms for years, so schools need to get involved.

The Safety Debate in DC

Recently, some conservatives have suggested that ending the ban on weapons on campus and allowing women to have guns on campus would make them safer. “The obvious solution to make an unsafe environment safer is to give students a fighting chance to fend off attackers. That means allowing them to be armed,” writes commentator S.E. Cupp for CNN.com.

But some victim advocates say that adding guns to the mix could be disastrous. “That suggestion shows a blatant ignorance of the issue,”says Ziering. “More often than not, victims are incapacitated in a way where a gun would make absolutely no difference. If anything, the guns would help the assailants and not the people being assaulted.”

But the Hunting Ground filmmakers say liberals aren’t sufficiently addressing the issue either. Last fall, the White House launched an “It’s On Us” campaign that encourages bystander intervention—students stepping into bad situations to help potential victims. It’s a clever idea: Research shows that a campaign against sexual assault isn’t going to stop rapists, but it can affect how bystanders address such situations. Nonetheless, Clark says the White House should be concentrating its efforts on earlier education.

“If you have to have a bystander intervene in a situation at a college party, we’ve already messed up,” she says. “We have to have this conversation much earlier, in elementary school or secondary school so that it never escalates to this point.”

Ziering adds that by concentrating on students’ responsibility, the campaign doesn’t deploy the proper pressure on administrators. “It’s not just on us. It’s on the administration,” she says.

After her experience, Ziering says if she could ask one thing of the White House, it would be to mandate independent investigators on campus and create a watchdog group that makes sure those investigators maintain their independence.

“We saw this with the military as well: we can’t have foxes guarding the henhouse,” she says. “Any time there is a conflict of interest in our criminal justice system, even on campuses, we won’t get the best outcome.”

Read next: The Debate: How Should College Campuses Handle Sexual Assault 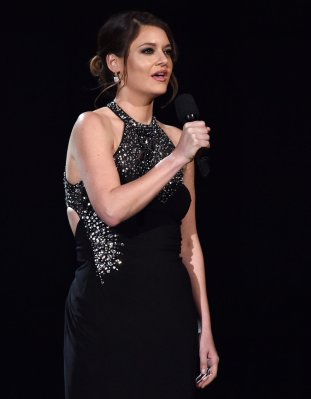 Meet Brooke Axtell, the Domestic Violence Survivor Who Performed With Katy Perry at the Grammys
Next Up: Editor's Pick