Birdman Soared, But Selma Stole the Show at the Oscars

Neil Patrick Harris looks better in tighty whities than Michael Keaton does. Lady Gaga has a secure enough soprano voice to sing four numbers from The Sound of Music, as Julie Andrews awaits offstage. One of the Birdman screenwriters has a dog named Larry, to whom he dedicated his award. If you want acceptance-speech rhetoric to soar into political eloquence, call on two of the most soulful men in music. And the institution of the Academy Awards can keep that mythical audience of “one billion viewers” tuned in, through interest or inertia, for prizes given to movies seen by perhaps only four million cinematic zealots.

In a show that clocked in at 3 hours and 40 minutes — the running time of Gone With the Wind, and about an hour longer than it took Ellar Coltrane to get through a dozen years of Boyhood — Alejandro G. Iñárritu’s inside-showbiz Birdman copped the major awards for Picture, Director and Original Screenplay, leaving its prime competitor, Richard Linklater’s Boyhood, with only the sure-thing: a Supporting Actress prize for Patricia Arquette.

Your local prognosticator went six for seven in the major awards (missing out on the Birdman Screenplay win), in a year of heavy or prohibitive favorites. Julianne Moore earned Best Actress for Still Alice, J.K. Simmons won Supporting Actor for Whiplash and Eddie Redmayne took Best Actor for The Theory of Everything. That meant no Oscar for Keaton, who during the climactic onstage Best Picture revelry affected a Beetlejuice shrug and said, “Look, it’s just great to be here, who am I kiddin’?” This was in keeping with his fatalist modesty this Saturday at the Independent Spirit Awards. When Keaton was asked where he’d put his Oscar statuette, he drily replied, “Next to my Nobel.”

For the first time in a year with more than five Best Picture nominees, each of the eight finalists went home with a little or a lot of Oscar love: Birdman with a big four, including Cinematography; The Grand Budapest Hotel with four on the craft side (Costume, Makeup and Hair, Production Design and Original Score); Whiplash with a surprising three (Sound Mixing and Film Editing in addition to Simmons’ lock); and one each for American Sniper (Sound Editing), Boyhood (Supporting Actress), The Imitation Game (Adapted Screenplay), Selma (Original Song) and The Theory of Everything (Actor).

On a TV evening whose commercials — for Samsung (home movies), Cadillac (“Dare greatly” to an Edith Piaf theme), xfinity (a blind child imagines her own Wizard of Oz movie) and iPad (illustrating a Martin Scorsese speech) — often showed more heart and craft than the onstage shenanigans, the Oscars show worked best, as TIME’s James Poniewozik suggested in his review of the show, when it was the Grammys.

Highlights: Harris’s clever opening song (written by Frozen composers Robert Lopez and Kristen Anderson-Lopez), The Lonely Island’s droll take on The LEGO Movie’s “Everything Is Awesome,” Tim McGraw’s plangent rendition of Glen Campbell’s Alzheimer’s song “I’m Not Gonna Miss You,” Gaga’s Maria von Trappezoid and, most powerfully, a choral performance of “Glory,” from Selma, that packed more emotion that the movie it represented. A few minutes later, Common and John Legend (who won the “Glory” Oscar under their real names, Lonnie Lynn and John Stephens) truly elevated the discourse with their acceptance speeches.

Common spoke of the Edmund Pettus Bridge in Selma, where Martin Luther King Jr. assembled his nonviolent protestors against the violent Alabama police 50 years ago next week. “The spirit of this bridge connects the kid from the South side of Chicago [himself], dreaming of a better life, to those in France standing up for their freedom of expression to the people in Hong Kong protesting for democracy,” Common said. “This bridge was built on hope, welded with compassion and elevated by love for all human beings.” Legend, pointedly applying the lessons of last year’s Best Picture winner 12 Years a Slave to 2015, noted that “There are more black men under correctional control today than were under slavery in 1850. When people are marching with our song, we want to tell you that we are with you, we see you, we love you — and march on.” David Oyelowo, who played King, was in tears in the audience. Chris Pine too.

The other political messages, much commented on by bloggers, were in the service of moderate causes that only Fox News could take exception to. The Imitation Game screenwriter Graham Moore, who revealed he had attempted suicide at 16, advised insecure teens to be proud and “Stay weird.” Simmons: Call your parents, and don’t hang up till they’re done talking. Arquette plumped for equal wages for women. Redmayne: Be nice to people with ALS. Moore: Be nice to people with Alzheimer’s and ALS.

Recognizing sufferers of these diseases not only helps mend the social fabric — it wins Oscars for worthy stars. Moore became the fifth consecutive Best Actress — after Natalie Portman in Black Swan, Meryl Streep in The Iron Lady, Jennifer Lawrence in Silver Linings Playbook and Cate Blanchett in Blue Jasmine — to play a woman with Alzheimer’s or some other severe emotional disturbance. And Redmayne took the My Left Foot award for contorting himself into a genius with extraordinary physical limitations.

Yet these two winners seemed genuinely ecstatic when they won their predicted awards. Moore managed to remain poised through her giddiness, but Redmayne interrupted himself mid-speech with a whooping “Wow!” and nearly ripped off his tuxedo tie. Congratulations to both of them. Coming during the titanic maelstrom of an overlong awards show, that’s Acting.

Read next: Lady Gaga’s Oscar Performance: Love It or Hate It? 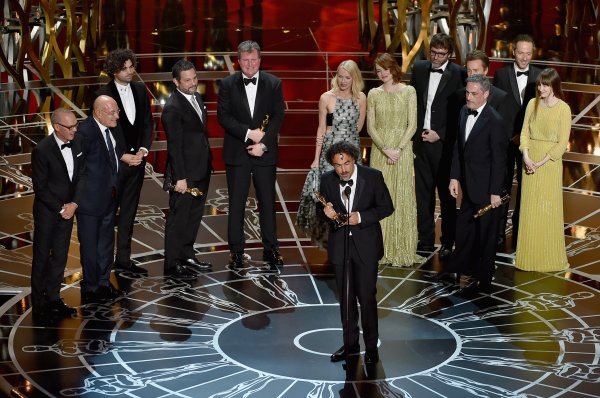 Here's What Twitter Talked About Most During the Oscars
Next Up: Editor's Pick