7 Surprising Ways To Eat Healthy at a Restaurant

Here’s some food for thought: A typical restaurant meal contains more than 1,100 calories. If you’re like the average American, you eat out five times a week—which could wreak havoc on your diet. But before you vow to brown-bag it forever, know that it doesn’t have to be this way. Food economists and consumer behavior experts have been studying the habits of restaurant-goers to identify why some leave happily sated and others fall into a food coma. They’ve learned that menu choices may have as much to do with where you’re sitting as what you’re craving. A host of factors—from the room’s lighting to the height of your table—can encourage you to make more nutritious decisions. Here’s how to set yourself up to enjoy a waist-friendly meal to the fullest.

Research shows that when we eat in groups, we tend to order similar types of food: Everyone opts for a salad, say, or most of the table indulges in burgers. Food economists from Oklahoma State University found that diners who caved to this subtle peer pressure also tended to be happier with their choice. Looking for dinner dates? Round out your guest list with friends more likely to get a side of farro than fries.

Setting the mood seems to matter as much in a restaurant as in the bedroom. When researchers from the University of Illinois at Urbana-Champaign replaced a fast-food restaurant’s fluorescent lights and rock-and-roll soundtrack with softer incandescent bulbs and mellow jazz, study participants ate 18 percent less food. They also ate more slowly and rated the food as more enjoyable.

Read more: Healthy Foods That Can Kill You

Request a table near the window

“If you want to stack the deck in your favor, think twice about where you sit,” says Brian Wansink, PhD, director of Cornell University’s Food and Brand Lab and author of Slim by Design. When his team compared receipts and table locations at 27 restaurants, they found that patrons at high-top tables tended to order more fish and fewer desserts, and diners near the window were 80 percent more likely to have salads. “Maybe a high table makes you feel more in control, and sitting near a window feels more public,” he says. “The why isn’t clear. But as we say in the lab: If you want to be skinny, do what skinny people do.”

Sit far from the bar

When you’re in view of the television, it’s tempting to watch between bites. But eating while distracted causes people to consume more—not only at that meal but later in the day as well, according to a British study. And TV isn’t the only temptation you’ll fight near the bar. The Cornell research team found that groups of four perched within two tables of the booze drank an average of three more drinks than patrons just one table farther away.

Read more: 10 Signs Your House Is Making You Fat

Ask for a tall glass

We tend to underestimate how much liquid is in short tumblers—which is why bartenders typically pour 27 percent more alcohol into short glasses than tall ones, according to a study published in the Journal of Consumer Research. The flip side of this optical illusion: By sipping your caipirinha from a tall glass, you’ll have fewer calories without feeling deprived.

At a buffet, make a beeline for the fruit

“The first food a person selects triggers what they take next,” wrote researchers in a 2013 Plos One study on buffet patrons. For their experiment, they split 124 breakfast diners into two groups: One navigated a bar that started with cheesy eggs and ended with fruit; the other group faced a buffet table in the reverse order. Of the people who encountered cheesy eggs first, 76 percent served themselves the (deliciously gooey) calorie bomb—compared with 29 percent of people in the fruit-first group. And those who took cheesy eggs at the start were more likely to pile on bacon and potatoes. At dinner? Head to the salad station first.

Calorie counts on a menu are a good start. But a 2014 study found that diners are even more motivated to order healthy when those numbers are translated into miles of physical activity. Every 100 calories is roughly equivalent to jogging one mile. The next time you’re waffling between a 600-calorie sandwich and an 800-calorie pizza slice, try thinking about the two extra miles it would take to run off the slice. (If you’re still craving the mozzarella and doughy goodness, it’s worth the calorie splurge.) 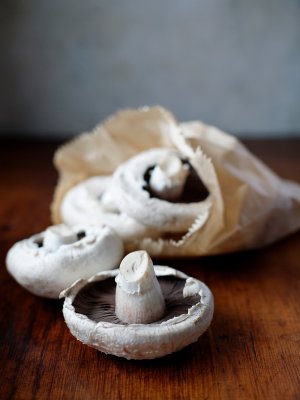 The 12 Ingredients Your Kitchen Should Never Be Without
Next Up: Editor's Pick