Ebola Bodies Are Infectious a Week After Death, Study Shows

Scientists have known for some time that the closer a person with Ebola is to death, the more infectious they are. A dead body with Ebola has been frequently referred to as a “viral bomb.” But what was unclear was how long bodies remained infectious. Now, researchers working for the National Institutes of Health in Hamilton, Montana released new findings on Thursday showing the Ebola virus may remain infectious in dead bodies for a week, and detectable for 1o weeks.

In the study, the researchers infected five macaque monkeys—a species they believe can serve as models for humans—with Ebola, then eventually euthanized them. They placed the dead monkeys in a temperature- and environment-controlled chamber to simulate the climate of West Africa. Over several weeks, the researchers sampled and swabbed the tissue of their nose, mouth, blood, lung, spleen, liver and muscle.

They concluded that infectious Ebola virus remained in the macaques’ organs for three days, and in their blood for seven days, after death. Viral RNA, which wasn’t infectious, was still detectable for 10 weeks.

The new findings underline the continued need for vigilance when burying the bodies of Ebola victims, as well as safer funeral practices. In the beginning of the current Ebola outbreak in West Africa, the spread of the virus could often be traced to funerals. Prior to massive education efforts, people living in the three affected countries often participated in intimate practices with the dead. In Liberia, for example, washing and kissing the corpse was a common custom.

The research also gives scientists a better understanding of how long the virus can remain in dead animals, since an outbreak is is typically spurred from contact between an infected animal and a human. It also provides a warning for researchers in the field who may handle primate carcasses, the researchers note.

Read next: How Today’s Ebola Response Reflects the History of Colonialism in Africa 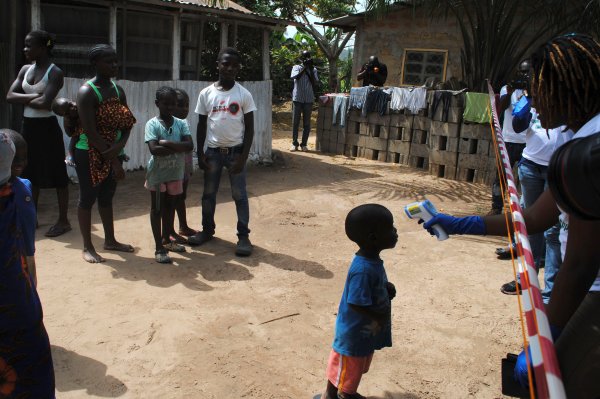