These Are the Beers Americans No Longer Drink

The recent drops in beer sales have been especially pronounced at many of the nation’s top brewers. Total shipments of both Anheuser-Busch InBev and MillerCoors have slumped as several of their major brands have lost substantial market share. According to data provided by Beer Marketer’s Insights, American sales of seven major brands, including Budweiser, declined by more than 20% between 2008 and 2013.

According to Eric Shepard, executive editor at Beer Marketer’s Insights, major beer brands can still point to the last recession as a contributing factor to their current slump. “The people that got hit hardest in the economic recession were your mainstream beer drinkers — lower- to mid-income males, 25 to 34 [years old],” Shepard said.

Another key factor in the weakening sales has been price dynamics. “Beer prices were increased more aggressively over the last five years than wine and spirits,” Shepard said. Many people in the industry believe that, as a result, some customers replaced buying beer with the now relatively less expensive wines and spirits, he explained.

Several other products were also gaining at the expense of big brand-name beers, Shepard noted. While some customers have been moving to wine and spirits, others were switching to imported beer, particularly Mexican imports. Indeed, in the five years through 2013, shipments of Mexican brands Dos Equis and Modelo Especial more-than doubled. Similarly, he added, “Some [drinkers] are moving to craft [beer]. Clearly, there’s been a trade-up in the industry.”

Craft beers have largely bucked the overall downtrend in beer sales. From 2008 to 2013, shipments of craft beer rose by 80.1% to a total of more than 16 million barrels, or 7.6% of the U.S. beer market. While the craft beer category now outsells Budweiser, it remains a relatively niche market. For comparison, the nation’s top-selling brand, Bud Light, shipped 38 million barrels in 2013, accounting for 18% of all beer shipped.

While the last few years have been difficult for many large brewers, they, too, have been introducing new products that combine well-known brand names with new concepts that appeal to consumers. In recent years, Anheuser-Busch has introduced Bud Light Platinum, a higher alcohol content beer with a sweeter flavor; Bud Light Ritas, a margarita-inspired malt beverage; and Shock Top, its own take on craft beer. As of last year, these three brands had captured 2% of the overall beer market.

To identify the seven beers Americans no longer drink, 24/7 Wall St. reviewed figures provided by Beer Marketer’s Insights for all brands with more than 1 million barrels shipped in 2008. All of these seven brands reported a 20% or more decline in shipments in the five years through 2013.

These are the beers Americans no longer drink.

Shipments of Miller High Life declined by 21.2% between 2008 and 2013, from more than 5 million barrels to 4 million barrels last year. High Life, known for its tagline as “The Champagne of Beers,” has been in production since 1903, although during prohibition the brand was used to market non-alcoholic drinks. While the brand is now over 110 years old, ownership of Miller Brewing has changed hands several times. In 1970, Miller was bought by cigarette maker Philip Morris. In 2002, Philip Morris, now called Altria, sold most of its stake in Miller to South African Breweries, which then changed its name to SABMiller. In 2007, SABMiller and Molson Coors Brewing merged their U.S. operations in a joint venture called MillerCoors.

Miller Lite states that it is “the original light beer,” having launched the category in 1975. Miller Lite’s ad campaign to introduce Miller Lite to the American consumer included the now famous tagline “Great Taste, Less Filling.” Even after sales declined by 22.6% from 2008 through 2013, Miller Lite remains an industry heavyweight, shipping 13.7 million barrels last year, or 6.5% of all U.S. beer shipments. Yet, Miller Lite remains far smaller than rivals Coors Light and Bud Light, which shipped 18.2 million and 38.1 million, respectively. These two brands alone accounted for 26.6% of the U.S. beer market in 2013.

Budweiser is one of the most famous brands in the world. Created in 1876, Budweiser quickly established itself as a national brand through, at the time, innovative production and distribution methods. These included introducing pasteurization to the beer industry as well as refrigerated rail cars. Today, Budweiser is owned by Anheuser-Busch InBev, which was formed after Belgian brewer InBev acquired American beer titan Anheuser-Busch for $52 billion in 2008. The sale of an iconic American brand to a foreign company initially caused some outrage. However, Americans themselves are drinking far less Budweiser than in years past. Shipments of the brand fell nearly 28% between 2008 and 2013. 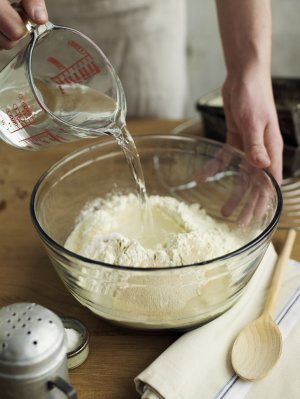 6 Baking Mixes You Won't Believe Are From a Box
Next Up: Editor's Pick