These Are the Best New Restaurants in the World

In seeking out the best new restaurants, we peripatetic editors at Travel + Leisure were hungry for more than just great meals. We were holding out for locales like Yeni Lokanta that serve up a distinct sense of place—ones that help travelers tap into the essence a destination. Our resulting list of favorites will direct you to the newcomers that are shaping the restaurant scenes in the world’s most exciting food cities.

In Mexico City, for instance, you can get a sampling of all the D.F.’s latest food trends by stopping into the stylishly casual food hall Mercado Roma. Hop from one kitchen to the next, snacking on chile-spiked pozole, clam and chorizo stew, and squid torta.

Philadelphia has become one of America’s most exciting food cities, and you’ll appreciate why after dining at Michael Solomonov and Steve Cook’s Dizengoff, where even the chickpea purées are memorable, especially when topped with zucchini and za’atar.

We found notable restaurants that run the gamut of dining experiences, from a posh new spot in London’s Claridge’s hotel—Fera, an ode to British terroir by star chef Simon Rogan—to a humble noodle joint on a Tokyo backstreet.

The Los Angeles food revolution that kicked off a few years ago is gathering strength, powered by unrivaled California produce, daring young chefs, a United Nations of ethnic cuisines, and, yes, a dash of Hollywood glamour. While most TV celebrity chefs are peddling overpriced comfort food, Curtis Stone, the Australian heartthrob ofTop Chef Masters fame, has caused a sensation with his thoughtful and utterly original Maude, in Beverly Hills. In the chic, rustic space, Stone presents multicourse market menus themed around a single ingredient. Fall pears show up as “snow” atop briny oysters and as a gelée highlighting a veal cheek; in winter he celebrates citrus with tangerine-glazed chicken terrine. We love the tables, set with vintage silver and china and inspired by the kitchen of Curtis’s own grandmother, Maude. Among the city’s rising stars: Kris Yenbamroong, the Thai wunderkind with an NYU film degree, who counted the likes of René Redzepi and Wylie Dufresne among fans of his pop-up dinners. At Night & Market Song, his permanent Silver Lake digs (both spare and ironically garish), he presents hyper-vivid, authentic northern Thai dishes like grilled pork neck with a bracingly spicy jaew chile dip, and hor ab, an intensely aromatic tamale of catfish and pork fat in a banana-leaf bundle. Along La Brea Avenue, the soaring 1929 building that housed onetime celebrity haunt Campanile has been reborn as the even more gorgeous République. Headed by Walter and Margarita Manzke, the brasserie stays open around the clock, whether for an early-morning blood-orange brioche or a late-night negroni blanc, scrambled eggs with sea urchin on toast, and the best frites west of Paris.

This megalopolis has always charmed us with its mix of waterside fish restaurants, smoky kebab joints, and drinking dens known as meyhanes serving sumptuous meze. But lately, local chefs and glamorous out-of-towners alike have been invigorating the restaurant scene. Massimo Bottura, Italy’s most famous chef, debuted his first outpost, Ristorante Italia, at the posh Zorlu shopping center. Instead of reprising hits from his avant-garde Osteria Francescana in Modena, the chef presents thoughtful distillations of pan-Italian classics: an osso buco cooked at a super-low temperature for 25 hours with bone marrow enriching the sauce, or a deconstructed tiramisu so light it practically floats off the table. Off frenetic Istiklal Street, tile-clad Yeni Lokanta is the modern meyhane of the moment. We’re dazzled by chef Civan Er’s small plates, updated with heirloom foodstuffs like “burnt” Denizli yogurt atop green beans, walnut-studded sucuk sausage, and beef ribs roasted in a wood-burning oven. And in the gentrifying Balat district, Turkish film director Ezel Akay has resurrected the iconic 125-year-old Agora Meyhanesi, where raki flows once again and the herb- and pomegranate-laced salads, flash-fried petals of liver, and sizzling squid set a new standard for meze.

Though the city’s high-voltage restaurant scene assures thrills for all wallets and moods, our favorites now are places with focused menus and big personalities. Downtown glamour meets uptown polish—with nostalgic echoes of Mitteleuropa—at Bâtard, from über-host Drew Nieporent and Austrian chef Markus Glocker. An octopus “pastrami,” bewitched into a Gaudí-like mosaic terrine, and hand-pulled strudel filled with apples, raisins, and sweetbreads are among Glocker’s assured neoclassical dishes. Having first triumphed in Tokyo, the Long Island–born noodle master Ivan Orkin set up the lively Ivan Ramen on Clinton Street, where he creates witty Japanese-American mash-ups like Amish-scrapple waffles masquerading as okonomiyaki pancakes. Which dish wins? It’s a toss-up between the triple-garlic, triple-pork mazemen, with compulsively slurpable whole-wheat noodles, and the rye-enriched ramen in a sinus-clearing red-chili broth. In the East Village, Huertas, a Basque gem from two young veterans of the Danny Meyer hospitality school, seduced us with its enticing tapas—plush jamón croquetas, adorable shrimp-and-egg canapés—as well as chef Jonah Miller’s tasting menu, with its earthy-sweet pairing of cockles and wild mushrooms, and suckling pig served with an Asturian bean-and-chorizo stew. Meanwhile, Danny Meyer himself has an instant classic, the new Roman-themed Marta. It’s the convivial scene behind the long marble counter that wooed us, along with the wafer-thin pizzas and perfectly grilled lamb chops. And isn’t it nice to bond with a stranger over glasses of Fruilian Ribola Gialla?

Ever since the avant-garde fireworks at restaurants like Quintonil and Pujol established Mexico City as one of the world’s top food destinations, the D.F. has been looking inward, with humbler cooking that explores the country’s own food traditions. Alejandro Ruiz, the powerhouse chef from Oaxaca who revitalized that region’s food scene, opened Guzina Oaxaca in Polanco. His menu is both anthropological and sensual, with dishes like caldo de piedra, a pre-Hispanic shrimp soup cooked over hot river rocks and perfumed with anise-y hoja santa and epazote. In gentrifying Zona Rosa, behind the cheery turquoise façade of De Mar a Mar, seafood whisked in from Baja and Puerto Ángel is the star of the menu devised by Pujol-trained Eduardo García. Everything at this lovable urban beach shack is so tasty it’s impossible to stop ordering more sashimiesque tuna laminado and sweet battered shrimp folded into hand-patted tortillas. To try everything that’s going on in the city at once, head to Colonia Roma. It’s a blast perching on stools and sampling from each kitchen at Mercado Roma: chile-intensive pozole from José Guadalupe, a stew of pristine Pacific coast clams and chorizo from La Ahumadora, and La Barraca Valenciana’s squid torta with garlicky mayo created by El Bulli veteran José Miguel Garcia.

Australia’s largest metropolis may have a reputation for the big, the obvious, and the showy, but the city’s restaurants have recently taken a turn toward the small, the unusual, and the understated. Mitch Orr, an alumnus of Italy’s vaunted Osteria Francescana, creates house-made pastas at Acme and prepares them in ways your nonna never imagined. That might mean linguine given a wok-like scorch with black garlic and burnt chiles or Filipino-inspired vinegar-tangy pork topped with a raw yolk and paired with immaculate hand-cut macaroni. In Redfern, a neighborhood on the rise, Eun Hee An and Ben Sears have traded the white tablecloths of their fine-dining backgrounds for spare furnishings and concrete floors at Moon Park. What the restaurant may lack in design it more than makes up for with its witty reimagining of Korean cuisine. Is that a glimmer of Scandinavia in that ssäm wrap of smoked eel and puffed rice presented on a nasturtium leaf? Or in the classic pajeon pancake topped by tufts of mackerel “floss”? In another nod to the Far East, the rambunctious, izakaya-inspired Cho Cho San is Sydney’s love letter to Japan: chef Nic Wong’s lamb cutlets are spiked with sancho pepper, and the gingery tatakiis made with prime Australian beef. Sydney’s go-to restaurant of the moment is inarguably Ester, a low-key spot where Mat Lindsay coaxes morsels of surprising elegance and originality from his wood-fired oven: lobster sausage on steamed bread updates the classic Aussie sausage sandwich with great success, not least when it’s paired with Si Vintners’ lovely pale Pinot Noir Rosé. 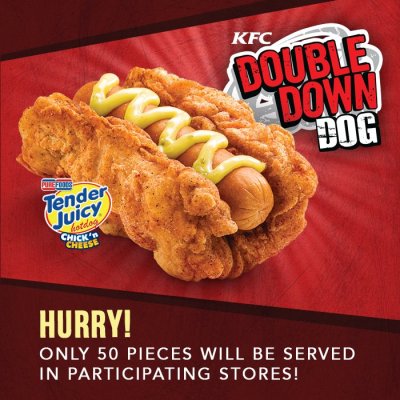 Thanks to KFC's New Hot Dog Wrapped in Fried Chicken, Gluttony Has Never Been So Easy
Next Up: Editor's Pick