Want a Bud Light Delivery? There's an App For That

Anheuser-Busch has a special delivery planned: with the touch of a button, Bud Light beer lovers can get an order delivered straight to their home.

The at-home beer delivery service is launching in the Washington, D.C., area today. The app is initially available for Android powered smartphones, with iOS coming soon, the beer company said on Thursday. Consumers can order between one to 100 cases of beer and get it delivered in under an hour, Anheuser-Busch has promised.

The app “is about the easy of delivery and getting the product to our consumers so they can continue the fun that they are having,” said Allison Gabrys, a product developer at digital development agency AKQA, which is working with Anheuser-Busch on the initiative.

Gabrys said that when they developed the concept, it was designed for a number of occasions and purposes. Deliveries could be perfect when hanging with friends for a spontaneous game-day football viewing party or to avoid having to lug up cases of beer to that third-floor walkup apartment.

There’s no price to download the app, though Anheuser-Busch says there is a “nominal delivery fee.” Meanwhile, Americans looking for a beer delivery will need to prove they are of legal drinking age. Distribution is being handled by startup Klink, which fulfills orders through local retailers within the delivery zone of the app. Anheuser-Busch says it eventually plans to bring this service to all of the states that will allow them to run this distribution channel.

The beer delivery space is getting attention from some of the nation’s biggest beer brands after several startups have launched their own efforts to tackle the market.

MillerCoors recently launched a pilot program with startup Drizly that would deliver Miller Lite to private homes in less than an hour. That initiative was meant to court the football-loving crowd, although the delivery service is also fairly limited in scope. For now, MillerCoors is only delivering its beer to Boston, New York, Seattle and Washington, D.C., in a promotion that ends on Feb. 1 (or even earlier if deliveries reach 20,000).

MillerCoors has for now lucked out on the regional bets that it has placed. The New England Patriots and the Seattle Seahawks are both still in the playoffs, with conference championship games set for this weekend (the teams aren’t playing each other).

“It is a great opportunity to bring e-commerce and delivery together,” said Dilini Fernando, digital marketing manager at MillerCoors. “A customer tweeted ‘Miller Time is near more than 60 minutes away’ — to be a part of that moment of purchase and to tell our story is really exciting.”

At-home delivery of beer, wine and spirits has courted attention from a handful of startups, including Drizly, Thirstie, BrewDrop, and Minibar. All of those offerings have limited reach for now. BrewDrop, for example, is only in the Austin region while Thirstie operates in just five cities.

Government regulation prevents broader adoption across all states. Seventeen U.S. states, as well as jurisdictions in four other states, have adopted forms of control over the distribution of alcoholic beverages. Those states and jurisdictions control the sale of distilled spirits, and in some cases wine, through government agencies at the wholesale level. 13 of those also control retail sales for the sale of alcoholic beverages at liquor stores, grocery stores and other retail locations.

Gabrys concedes control states are a challenge, although she added that regulation for any new startup or business venture varies from state to state, and so the at-home beer delivery service will strive to be as national as possible, despite some potential limitations. Deliveries will need to occur whenever beer can be legally sold on the retail level within the states. 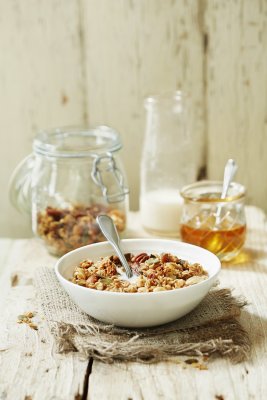 10 Whole Grain Breakfasts to Power Your Day
Next Up: Editor's Pick