Bone Soup Is Back With a Vengeance

The year’s hottest energy drink contains neither caffeine nor kale. Instead, people looking for an edge are firing up their stockpots for a ladle of bone broth: water and animal bones simmered together for hours into a cartilage-spiked stock. Of course, bone broth is hardly new. Your grandmother made it, good restaurants have a pot going at all times, and it has long been a pillar of the caveman-obsessed paleo diet. But lately, bone broth has gone mainstream, heralded for its purported (but as yet unproven) healing powers.

“It’s really exciting to me that something traditional cooks have always done is now coming to the forefront as a nutritional component of a diet,” says Sally Fallon Morell, a co-author of the 2014 book Nourishing Broth. Morell grew up hearing that broth gave you beautiful skin–and now she says she understands why. Broth is a vehicle for the bones’ cartilage strands, collagen and amino acids, she says, all of which may proffer beauty and health benefits if it is eaten regularly.

There’s little research on the health benefits of bone broth, but that doesn’t seem to be deterring its fans–a few doctors among them–who insist that the gelatin-rich broth can help alleviate joint pain, dry skin and even long-standing stomach woes.

And with or without reams of research, people are lining up for the stuff–literally, in the case of Brodo, a new bone-broth boutique in New York City that has some people trading their morning lattes for cups of bone juice to go.

If you want to give it a shot, keep the bones next time you roast a chicken (or a pig, lamb or cow). Try this recipe from Brodo’s owner and chef, Marco Canora, adapted from his new cookbook, A Good Food Day.

4 celery stalks, cut into 1-in. pieces

1. In an 8-qt. pot, combine bones and drumsticks. Run cold water over chicken to rinse. Drain water and lightly pack chicken in pot. Cover by 4 in. with cold water and set over medium-high heat.

2. When liquid boils (45 min.), reduce the heat to medium and move the pot so it is not centered over the burner but off to one side. Use a ladle to skim and discard any fat and foam on the surface. Simmer about 1 hr., until the broth is clear.

3. Add all other ingredients and simmer an additional 2 hr. Use a spider skimmer to remove any large pieces of meat. Remove all solids by pouring broth through a fine-mesh strainer. Discard solids and cool broth before storing. 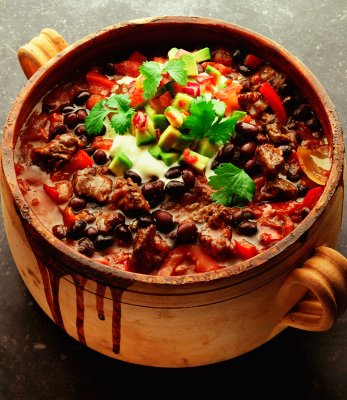 The 4 Best Beef Cuts for Chili
Next Up: Editor's Pick