The Walking Dead Watch: 'Self Help'

Eugene: "Hello, is it me you're looking for?"
Frank Ockenfels 3/AMC—© AMC Film Holdings LLC.
By Matt Vella

Episode five of the fifth season of AMC’s The Walking Dead takes a breather from the rapid-fire plot development of the first few episodes and goes into Balasana for some character study. Unlike the first handful of episodes which consisted of an anthropological tour through the various types of human communities—cannibals, cowards, exiles—and how they self-organize—command and control, perfectly rational, mildly democratic—“Self Help” turns inward, developing Abraham and Eugene, two relative late comers to the series.

It’s all a bit dull, especially if you’ve read the comic books and know what to expect from Eugene, the mullet-sporting scientist supposedly from the Human Genome Project and supposedly in possession of a cure for the zombie outbreak. Though, the writers were kind enough to toss in two gratuitous scenes, one of sex, one of carnage, to keep things from dragging.

Abraham, Rosita, Glen, Maggie, Eugene and Tara have taken the church short bus, leaving the rest of the group behind to get to Washington, D.C. as quickly as possible. On the way, the bus crashes spectacularly and for reasons unknown. The group’s only option is to fight its way out.

It’s nice to know that, even after the apocalypse, people are still quoting Bill O’Reilly even though he’s presumably been eaten. “We’ll do it live!” Abraham asserts before leading the charge into a thicket of walkers surrounding the vehicle. (It’s also nice to know that, even in a time of severe scarcity, Abraham is still managing to stock up on phosphorescent red hair dye.)

There’s a cloud of uncertainty around Eugene as all of this unfolds. Is he just a coward? Is he simply on the spectrum? Or, is there something else going on? We’re also treated to some radial tilt-shift flashbacks of Abraham’s former life as a father and husband doing his best to get through the end of the world.

The group fights its way to an abandoned book store. We get to see vignettes of life on the road during the end times, fashioning a lighter from a battery, making a stove with hangers, and so on. Abraham and Glenn, Glenn and Maggie, Tara and Eugene all engage in short colloquies during this interlude. In these quiet scenes, we can see the interpersonal bonds of the group tightening. Which is a nice counterbalance in a show where things are usually falling apart (or, more likely, being shredded apart by gnashing teeth). But there’s a shared delusion quality to it all.

The rationale of the group’s “mission” (getting Eugene to D.C.), which has seemed tentative all along, frays even more when Tara catches him watching Rosita (Laura Croft in pigtails) and Abraham making love. Eugene, peeping from the self help section (winky face), admits that he caused the crash by putting crushed glass in the bus’ fuel line. Tara chalks it up to bad judgement and promises to keep Eugene’s secret.

But why—considering he almost killed everybody aboard—doesn’t exactly add up until we see Maggie and Glenn engaging in their own pillow talk. Maggie is happy to have something to be going toward, rather than dwelling on the horrors of the past. They’re finally living for the future, she explains, and that feels pretty good. Cut to a shot of a walker shambling ever forward, presumably happy and fulfilled by his life’s “ambition” to eat another brain.

You get the feeling everybody senses Eugene is full of it, but that it’s alright so long as his story of weaponized diseases and missiles and secret labs provides a pretext for forward motion (and meaning) for everybody in the group. All in all, this is one of the series’ more deeply nihilistic episodes I can recall.

The group finds a semi-functioning firetruck and heads out of town—but not before Eugene mows down a dozen walkers with the roof-mounted firehose. It’s new, it’s gross, and it’s spectacular. This saves the day but also empties the tank which causes problems down the road, a lot like Eugene’s save-the-world story itself, which provides a reason to keep going in the present but will soon cause much, much bigger problems.

Things finally come to a head when the group finds itself face to face with a massive ranch (feed lot?) of walkers. Abraham—who we’ve learned drove his wife and children away by trying to protect them, brutally—wants to push through and the rest of the group revolts.

As the tussle over what to do gets physical, Eugene confesses that he’s full of it. “I’m not a scientist,” he says, “I just know stuff.” He goes on to explain, in a perfectly delivered, Deadwood-esque monologue, that his story is an adaptation to the environment, his way of getting strong people to protect him. And get him to Washington, which he believes is the most likely place to provide refuge.

Abraham loses it and punches Eugene, a lot. We flash to Abraham finding the corpses of his daughter, son, and wife. Just as he’s about to kill himself, we hear Eugene mewling for help. In that moment, Abraham and Eugene seal their pact. Eugene will provide the lie and Abraham the muscle. Or as Ernest Becker might summarize it all, living is lying.

Product Placement
The book store is replete with easter eggs. Not only is Eugene watching from the self help section, his confession to Tara is backdropped by a row of We All Fall Down, whether that is Nic Sheff’s addiction memoir or the Y.A. hit from the early-90s is unclear but still… The shelves and signage in the story are filled with clever, covert messages to the audience.

About the Artist
TIME editor-at-large Richard Lacayo helpfully pointed out to me that Caravaggio’s The Denial of St. Peter, which was featured prominently in episode four “Slabtown,” is not located in Atlanta but in New York. So how did it make its way down the eastern seaboard during the apocalypse? 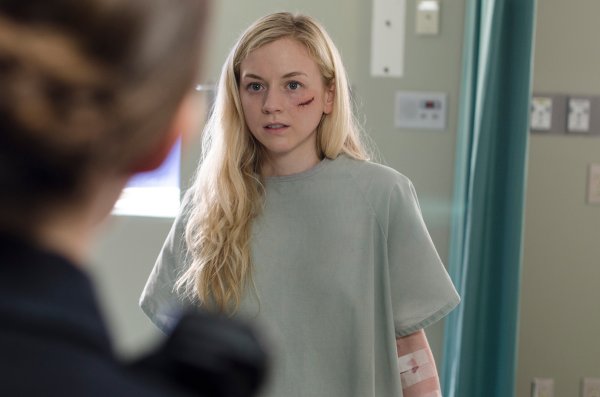