Here's Why Millennials Need to Learn to Love Frozen Food

On Oct. 21, senior citizens in Merrimack, N.H. participating in the Meals on Wheels service waited eagerly to be delivered platters of frozen turkey meatloaf with mashed potatoes, corn, kidney beans and flax-seed bread. Those with slightly more traditional palates opted for a dish of liver and onions—frozen, too. But tell any millennial about the menus of programs like Meals on Wheels, a global delivery service of mostly frozen dishes to the elderly, and the response isn’t likely to be as welcoming.

It’s no secret that millennials have an aversion to frozen food. The marketing of TV dinners targets empty nesters, and those dropping frozen meals in their grocery carts are getting older and older. Younger generations are instead flocking to services like GrubHub, which delivers hot restaurant meals, or AmazonFresh, recently launched in New York City, which delivers fresh groceries.

In fact, research suggests that millennials have a fear of the lifestyles commonly associated with frozen food eaters: lonely elderly people whose only social interactions are with delivery volunteers, or physically limited seniors who stockpile food in the freezer in lieu of grocery shopping. Millennials have made it a goal to avoid that kind of life, studies say. According to a report by Edelman, millennials distinguish themselves from Generation X and the Baby Boomers by living more often with others, a testament to a shared fear of being alone. And a collective desire for a healthy lifestyle has made them more conscious in resisting the forces of aging, according to research by Nielsen and the National Marketing Institute.

The inescapable reality, though, is that someday millennials will age. While millennials’ preferences for convenience and health have driven the evolution of online food delivery services, the options for seniors, particularly those who are alone, low-income or face dietary restrictions, remain unchanged.

Part of the reason is science: flash freezing meals not only is convenient, but it also prevents bacterial growth, according to Greg Miller, CEO of Magic Kitchen, which serves many elderly customers. Additionally, Miller said that when thousands of dollars are spent to analyzing their specially-made meals’ nutritional content, freezing the meals is often the only viable option for elderly who require, for example, a week’s supply of low-sodium meals. “There’s always going to be a need for this particular group of individuals,” says Ellie Hollander, CEO of Meals on Wheels, which partners with companies like GA Foods and Golden Cuisine to craft similarly specialized meals. “That’s not going to be replaced by [online food delivery services]. That’s just a fact.”

Still, some reports have argued that America’s “love affair” with frozen foods is over. That may only be true for the commercial frozen food industry, which includes brands such as Lean Cuisine, Marie Callender’s and Healthy Choice. The industry’s sales are in decline: U.S. revenue fell 2% between 2013 and Aug. 2014, the first drop in recent years, according to Nielsen data. Similar to research on millennials’ preferences, a 2012 survey found that shoppers were turning away from commercial frozen food for nutritional reasons. But that doesn’t mean the demand for senior services’ frozen foods—meals individually tailored to dietary needs—is also melting. It’s actually the opposite: Miller says Magic Kitchen has grown more than 40% year-over-year, while Meals on Wheels now serves over 1 million meals each day.

Part of that demand growth is attributed to fewer federal investments in the Senior Nutrition Programs authorized by the Older Americans Act, which was passed in 1965 to provide community services to elderly citizens. As a result, seniors’ nutrition appropriations, which subsidize meal delivery services, have plummeted since 2009.

The lack of federal funding will only boost the proportion of American seniors who face “the threat of hunger,” which was 15.3% in 2012, according to a recent report by the National Foundation to End Senior Hunger. The percentage, which has risen from about 11% in 2001, also varies widely across state, but the lowest rate is still 8% in Minnesota. (Click on states in the map below to learn their exact rates.)

The figures are perhaps the most unsettling for millennials, some of whom, barring significant changes, will inevitably find themselves someday as senior citizens unsure where to obtain their next meal. Worse, demographic trends are making it harder for millennials to escape this fate. The 60+ U.S. population is projected to double between 2010 and 2050, with the proportions of single-person American households higher than ever, according to the Census Bureau. Meanwhile, the prevalence of cooking meals at home has decreased significantly across all socioeconomic groups since the 1960s, according to NIH research.

In other words, the stars are aligned for some millennials, whether they believe it not, to subscribe in their sunset years to elderly food services that serve frozen meals. And that’s only if they’re fortunate enough to obtain access to programs like Magic Kitchen or Meals on Wheels that carefully craft dishes to meet their nutritional needs.

Still, services popular with millennials now, like GrubHub or AmazonFresh, have the opportunity to remain popular with millennials by tapping into the expanding market of elderly meal services. In fact, both GrubHub and Amazon aren’t opposed to filling the smaller yet critical market of individualized elderly meal plans. “We’ve found that we have a wide range of customers,” an Amazon spokeswoman said in response to AmazonFresh’s target demographic. “Our job is to listen to our customers, invent on their behalf, and let them decide.” A GrubHub spokeswoman similarly said that while GrubHub is “focused on the opportunities within our current market,” that doesn’t mean “[an elderly meal service] isn’t something we may look into in the future.”

After all, data makes clear that senior services are in need assistance, too. And these programs, like Meals on Wheels, are more than ready to adapt to the digital platforms currently serving their future customers. “[Meals on Wheels] is a great public-private partnership,” says Hollander. “And there’s no reason why we can’t be excited that [services like GrubHub] may become partners as that same population ages.” 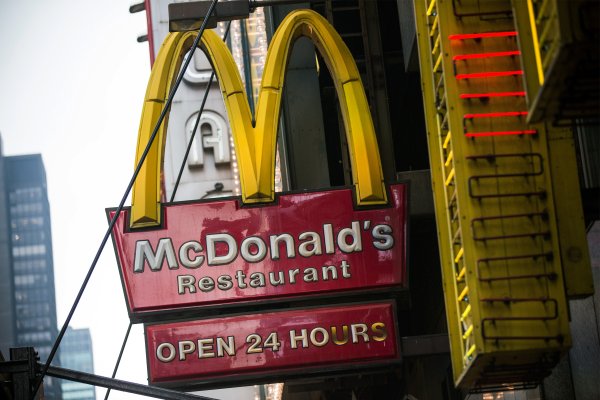 This Is McDonald's Big Plan to Win You Over
Next Up: Editor's Pick