Don't call me Joey: Not a kangaroo—but not not one either.
Nobu Tamura—Wikimedia Commons
By Michael D. Lemonick

Birds gotta fly, fish gotta swim, kangaroos gotta hop—unless you’re talking about the eight-foot-tall, quarter-ton, kangaroos known as sthenurines (and no, that is not a typo). These distant cousins of modern red and gray kangaroos went extinct about 30,000 years ago, and their fossils weren’t discovered until the 1800s. When the species at last came to light, it was not easy to take seriously, resembling nothing so much as cartoon versions of its modern cousins. “They were short faced,” says Brown University biologist Christine Janis, “not long-faced like modern kangaroos, and the smallest of them were as big as the largest modern kangaroos. It wasn’t clear,” she adds, “how they could hop at that size.”

And according to a new paper Janis just published in the journal PLoS ONE, they probably couldn’t. Instead, she and two co-authors conclude after several years of investigation involving more than 140 skeletons from kangaroos and related species such as wallabees, the sthenurines walked upright on two legs.

The evidence comes from virtually everywhere across the creatures’ anatomy. Their teeth, the scientists observe, look more suited to browsing on trees and bushes than nibbling on grass as modern ‘roos do. That implies the ability to stand upright on two legs to reach the branches.

“They also had flared hipbones,” says Janis, with ample room for large gluteal muscles that would have permitted them to put weight on one leg at a time, something today’s kangaroos never do. Modern kangaroos amble around on all fours—or fives, if you count the tail, which they use for balance—when they’re browsing. When they want to go fast, they hop.

That’s possible only because they have flexible backs and stiff, substantial tails, which sthenurines lacked. The sthenurine hands, moreover, were unsuitable for bearing their weight. “They would have had trouble walking on all fours,” says Janis. The animals’ very bulk would have put terrible strains on their tendons if they even tried to hop.

“Some have argued that the sthenurines might have had thicker tendons to compensate,” Janis says, “but that would have made the tendons less elastic. It just seems biomechanically unlikely.” Any arguments about tendons and other soft tissues are somewhat speculative in ancient specimens, of course. “Imagine that we only knew elephants as fossils,” says Janis. “How would we know for sure they had trunks?”

The other evidence all points in one direction, however. As Janis straightforwardly puts, “just about everything we looked at made us go, ‘oh, that fits in.'” In the often elegant study of anatomy, the answer that fits is usually the answer that’s right. 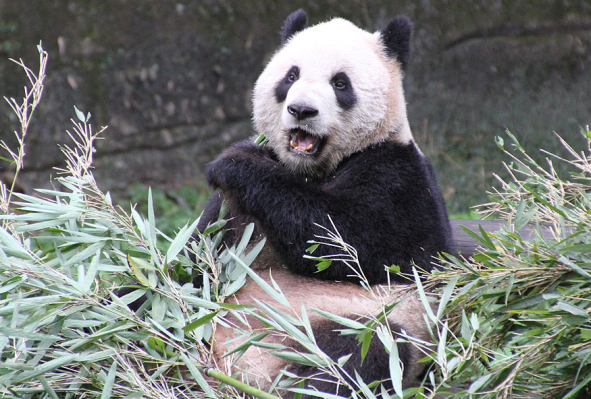 Watch a Squirrel Rudely Wake Up a Sleeping Panda
Next Up: Editor's Pick