In case social media horror stories of new iPhones bending in pockets (#Bendgate), ripping out people’s hair (#Hairgate/#Beardgate), and crashing after iOS 8 updates (sorry, no cute hashtag here) weren’t enough to deter Apple addicts from buying an iPhone 6 fresh off the assembly line, perhaps a warning from acclaimed astrologer Susan Miller will do the trick.

“I’m such an Apple addict, I love everything they come out with, but it’s not the right time,” Miller, founder of Astrology Zone, tells TIME. “I know that everybody wants to buy the iPhone 6, but you’ve got to wait.”

Why? Mercury is in retrograde between October 4 and 25 — and that period of cosmic slowing, when the planet appears to be traveling backwards, is notorious for misunderstandings and technological failings. “It’s not a good time to buy an electronic item,” Miller says. “Sometimes you can make the wrong decision or you buy something and you never use it and you say to yourself, ‘Gosh, that was a bad purchase.’ You bought the wrong model or then it goes on sale the following week, or something happens… [iPhones are] going to continue to have little software bugs.”

What if you’ve already bought the iPhone? Is it too late?

Out-of-stock Apple stores and extended shipping dates might actually prove to be a blessing in disguise.

Even if you have technically ordered a new iPhone during Mercury retrograde (like this astrologically-unlearned reporter did prior to interviewing Miller), the expert says that you’re in the clear as long as it arrives after the planet is out of retrograde.

“You can even call [Apple] up and say, ‘You know what, I’m not going to be here. I don’t want anybody to take it from my building, so could you deliver this in November?'” Miller coaches. “And they will. They’ll even be happy to hear from you because they think that they’re running short.”

When is it safe?

Even though Mercury retrograde technically ends October 25, Miller says that November 10 is the ideal date to start getting new electronics. Because the effects of retrograde might linger for a few days. While some call this a “shadow period,” Miller refuses. “It’s just so menacing.”

Rather, she compares it to, “A little like a person who wakes up who’s groggy and he needs a little coffee first because he’s walking into furniture… he’s lagging.”

What if you get the phone anyway?

Miller says that her daughter — “an Aries, they never trust what you say and have to do their own little empirical research” — once bought a laptop during Mercury retrograde and had to sell it on eBay after realizing she hadn’t bought enough hard drive space.

“She said she won’t be doing that anymore,” Miller says. “I bought my air conditioner in September knowing this was coming… Just give it a few weeks space.” 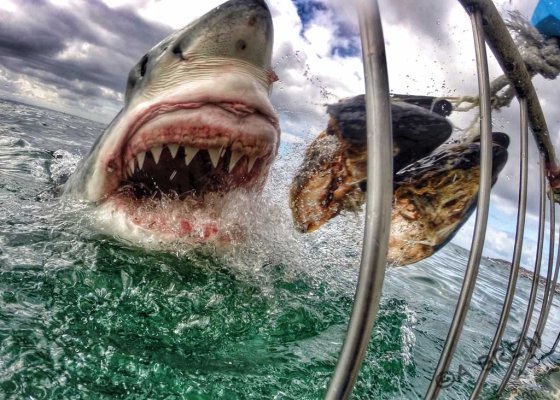 Capturing a Great White Shark with a GoPro
Next Up: Editor's Pick