Every Day Is Throwback Thursday: The Weaponized Nostalgia of the Internet

Illustration by Oliver Munday for TIME
By James Poniewozik

News outlets have always loved the convenience of anniversaries, of course; we’re in the middle of experiencing the 50th birthday of everything that happened in the ’60s. But lately we’ve been buried in “Wanna Feel Old?” listicles and “___ Turns 20” features. (Some of them, I fully admit, written by me.)

A lot of this material is aimed at millennials (see the outpouring of love for cultural landmark Saved By the Bell), but I wouldn’t want to overstate this as a generational phenomenon. My own people, Gen Xers, grew up on Happy Days and gave the world the Schoolhouse Rock Live! musical. Premature nostalgia may just be our general way of dealing with our society’s extended nether-zone between childhood and independent adulthood.

Whatever the explanation, though, online sharing and social media have positively weaponized nostalgia. Remembrances–#TBT, “23 Things ’90s Kids Understand”–do well on them, and the media business has learned desperately to give Facebook what it wants. And Facebook wants to remember: with its baby pictures and chronological timelines and personalized Your Life in Review videos, it’s basically a supercharged “Remember when?” machine.

By coincidence, my column comes out on the same day as my review of Mulaney, a not-great sitcom from a 32-year-old comedian whose distinguishing feature is its overwhelming sense of nostalgia for the ’90s sitcoms like Seinfeld that it imitates. As I wrote in my review, I am not crazy about the show. But I wouldn’t be surprised if it ends up doing well in the ratings on sheer throwback appeal. Check back in 10 years and see if we’re celebrating its anniversary too. 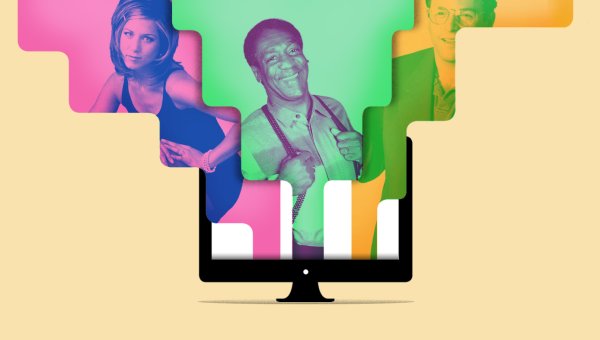 The Internet's Gone Nostalgia-Crazy
Next Up: Editor's Pick