Like the mighty Thor himself (or herself, now), Marvel shocked the comic book world last July when it announced on The View that a woman would be picking up the avenging Asgardian’s hammer. TIME got a sneak peek at the cover art for the issue in which the passing of the hammer goes down, Thor #1, out October 1.

We also had a chat with the book’s writer, Jason Aaron, about the new female Thor and the strong mixed reactions that came from Marvel’s announcement. Many welcomed the news as a sign of a largely male-dominated culture making moves to appeal to female fans, but others saw it as either a cheap play in that direction — or seemingly couldn’t handle the idea of the most macho of Marvel’s muscled men becoming a woman (even though a female Thor makes total sense).

“It was pleasantly surprising that it’s become such a big story,” said Aaron. “I would be worried if I didn’t feel strongly about the story that we had, if it was all just about a press release and creating a lot of buzz beforehand. But I don’t feel nervous because everything that we’re doing started with the story, the story that I’ve been telling with Thor and this new story that I want to tell.”

The only “disappointing” thing for Aaron, he said, is that “there has been some grumbling that seems to mostly revolve around the fact that it’s a female character we’re replacing Thor with. I think if we just said somebody else is going to pick up the hammer of Thor — it’s just this other dude — I don’t think we would’ve gotten quite the same response.”

“But for me, that part’s a little washed out by the response on the flip side, where you’ve got tons of people who are excited about the idea of a female character at the head of this book, and who are excited to pick the book up who haven’t been reading it before.”

When asked if having a female Thor was an effort by Marvel to diversify its characters — and then, hopefully, its fanbase — Aaron said that while Marvel was “behind [the plan] from the get-go,” the initial idea to make the switch was his.

“That said, you can say that Marvel is more conscious of diversifying the lead characters in their books by way of diversifying its audience, then in turn diversifying the creators who work on that book,” Aaron added. “It’s generally something everybody is more aware of, it’s something that’s in the zeitgeist these days. But it’s not like the changes that we’re doing to Thor were motivated purely by that, that’s more the reason that Marvel got behind it in such a big way . . . it’s certainly more than just a press release or a sales gimmick.”

Aaron was clearly excited not just about the new female Thor he’s created, but also the story he’s building around her. And the first issue — no spoilers — is a doozy, leaving behind plenty more questions than it answers. We’ll say this, though: The way in which the transformation happens fits in perfectly with the mythos around Thor — and his hammer, Mjolnir.

“To me, it’s not just about the idea of ‘let’s change Thor into a woman and figure it out as we go,'” said Aaron. “It’s about who is that character underneath the mask and what’s her story. So that’s the part I’m excited by. If I didn’t have that part, this would be pretty hollow, and I’d be worried about where we were going. But everything started with that story, so really the surprise of this happening, the surprise of somebody else picking up the hammer and the mystery of who that person is underneath that mask, that’s really just the beginning, that’s really just the introduction. Once we find out who she really is, the real story begins.” 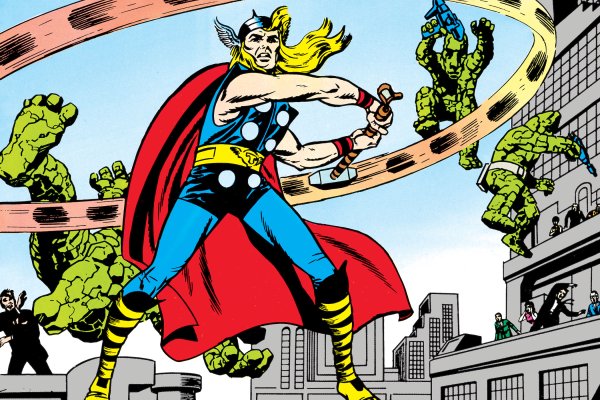 See Thor's Various Incarnations Over The Years
Next Up: Editor's Pick