The release of a video showing the brutal murder of freelance journalist Steven Sotloff, who wrote for TIME and other news organizations, poses urgent questions not only for the U.S. but also for Britain.

Sotloff was the second U.S. national to be paraded before his death by a masked member of the Islamic State of Iraq and Greater Syria (ISIS). The militant’s accent appears to mark him out as a Londoner and British media have dubbed him “Jihadi John” after former hostages suggested he may be one of a trio of British ISIS fighters they referred to as “the Beatles” during their own captivity. At the end of an earlier video announcing the death of U.S. photojournalist James Foley, the masked militant turned to the captive Sotloff, clad in an orange jumpsuit, and warned he would be next. The latest recording includes a similar death threat, this time against a British hostage, whose family has asked that his name be withheld from media reports.

British authorities have known for some time that ISIS was holding a Briton along with as many as 20 other prisoners, but had deliberately sought to keep this situation quiet, believing under-the-radar contacts with the captors enhanced the chances of the hostage’s release. News of the specific threat unleashed calls for the British authorities to do something. Their problem is that the range of options open is limited and fraught with risks.

In the U.S., President Obama drew fire for an Aug. 28 press conference by seeming to admit to a lack of strategy for fighting ISIS. The policy vacuum across the Atlantic has been even more pronounced. Just over a year ago, British Prime Minister David Cameron lost a House of Commons vote to endorse U.K. participation in U.S.-led airstrikes against the Syrian regime, triggering a series of events that led to the abandonment of the U.S. plan. “It is clear to me,” said Cameron at the time, “that the British parliament, reflecting the views of the British people, does not want to see British military action.” Britain’s enthusiastic intervention in Iraq and elsewhere during Tony Blair’s premiership undoubtedly left Britons deeply wary of fresh military deployments, especially in support of U.S. campaigns. Meanwhile, the Conservative-Liberal Democrat coalition government has wrestled with internal divisions over measures to combat jihadism at home, whether by inhibiting travel to and from conflict zones—one proposal would see British nationals potentially denied a right of return—or by toughening surveillance measures on suspected jihadis.

News of the British hostage at mortal risk from an English-sounding jihadi may be the catalyst that sees a British government again joining forces with the U.S. Cameron appeared in the House of Commons today to condemn the “abhorrent and barbaric” killings of Foley and Sotloff and to issue a message to ISIS: “These people need to understand we will not waver in our aim of defeating terrorism.” Ed Miliband, leader of the opposition Labour party, pledged support for this aspiration.

“The key issue is stopping the momentum of [ISIS] and there does seem to be an effective formula for that which is reinforcing and arming the Kurdish forces and combining that with airstrikes,” says Nigel Inkster, director of Transnational Threats and Political Risks at the London-based International Institute for Strategic Studies. “This won’t solve the problem of [ISIS] because they have a strong hinterland in Syria, but would buy time to pursue other strategies. The behavior of [ISIS] and the threat it poses is such that this might be a much more saleable proposition than was the case with Syria.”

Charles Bird, a teaching fellow at the Center for the Study of Terrorism and Political Violence at Scotland’s St Andrews university, also perceives a new British readiness for action but warns that any reaction “must be dispassionate”. As a U.K. diplomat, he was seconded to the British military during and after the invasion of Iraq and sees a warning for Britain in the intentional parallels between ISIS hostage-killing and the similar bloody dramatics staged by Abu Mousab al-Zarqawi. Zarqawi, the Jordanian militant who founded al-Qaeda in Iraq, serves as a malign role model for ISIS, inspiring its use of hostages to gain publicity and provoke a confrontation with the West. “There are lessons that we’ve learned from Iraq,” says Bird. “At one stage it looked like Zarqawi’s group was making quite a bit of progress, but then it was the Sunni tribes that said ‘no actually we’ve had enough of this; we don’t like this brand of Islam’.” Bird says Britain should focus on finding partners on the ground in Iraq and Syria to oppose ISIS. “We have to be very careful that in trying to squash the [ISIS] bubble we’re not throwing fuel on a future fire.”

In fact, Britain might serve a useful role in helping the U.S. to broaden support for action against ISIS, in particular in helping to get Turkey on board, says Peter Neumann, a professor at the International Centre for the Study of Radicalisation based at London’s King’s College. “Turkey has an interest in the Kurds not becoming America’s only friend in the region.”

NATO leaders arriving today in Wales for a summit that already had a full agenda discussing Russian aggression in Ukraine are likely to hash out some of these options in bilateral meetings. Back in Westminster, work is continuing to look at ways of inhibiting the flow of young British Muslims to Iraq and Syria and to reduce the threat they may pose to the U.K., where the terror threat level was raised from “substantial” to “severe” on Aug. 29. Ghaffar Hussain of the Quilliam Foundation, which describes itself as “the world’s first counter-extremism think tank,” thinks that it is in this area that the British government is particularly lacking. “The government talks a lot about stopping terrorists. It’s almost too late if you’re doing this when people are already radicalized.” He argues that the presence of “Jihadi John” and other Britons in the ranks of ISIS shows how urgently Britain needs to focus on preventative work, to counter the narratives and recruitment processes that draw British youth to radical Islam. “Currently in the U.K. that’s not happening at all,” he says. 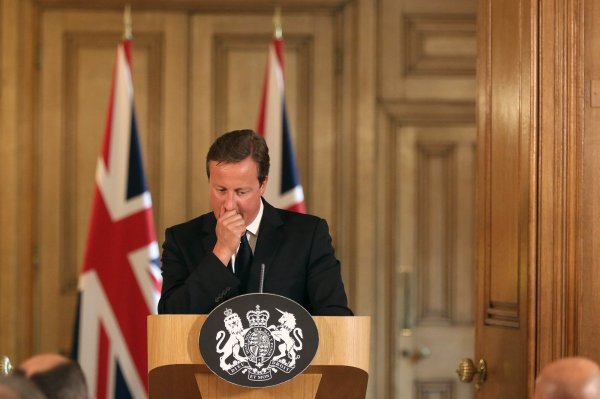 'Severe' Terror Threat in U.K.
Next Up: Editor's Pick