Obama Says 'We Don't Have a Strategy Yet' for Fighting ISIS

President Barack Obama seemed to commit the worst of Washington gaffes Thursday when he updated the American people about the ongoing threat from Islamist militants wreaking havoc in Iraq and Syria.

“I don’t want to put the cart before the horse: we don’t have a strategy yet,” Obama said of the effort to combat the militant group Islamic State of Iraq and Greater Syria (ISIS) in its safe haven in Syria. “I think what I’ve seen in some of the news reports suggest that folks are getting a little further ahead of what we’re at than what we currently are.”

Obama’s comment that “we don’t have a strategy,” delivered to reporters at the White House before the Labor Day holiday weekend, prompted immediate mockery from Republicans — not to mention quick damage control from the White House.

“In his remarks today, [Obama] was explicit — as he has been in the past — about the comprehensive strategy we’ll use to confront [ISIS] threat,” White House press secretary Josh Earnest said in a series of Twitter posts. “He was referring to military options for striking [ISIS] in Syria,” Earnest added in a hastily scheduled CNN appearance.

Obama was set to meet with the National Security Council on Thursday evening, and he said his Administration is working hard to develop a plan for stemming ISIS’s spread from Iraq to Syria.

“We need to make sure that we’ve got clear plans, that we’re developing them,” he said. Obama said he’s ordered Secretary of State John Kerry to begin assembling a coalition to strike back at ISIS, while he has tasked Secretary of Defense Chuck Hagel and the Joint Chiefs of Staff to present him with military options. “We’re gonna cobble together the kind of coalition that we need for a long-term strategy as soon as we are able to fit together the military, political and economic components of that strategy,” Obama said. “There will be a military aspect to that.”

The President defended his decision not to seek authorization from Congress before beginning strikes on ISIS targets in Iraq three weeks ago, saying the urgency of the threat to the U.S. consulate in Erbil required immediate action. “I can’t afford to wait in order to make sure that those folks are protected,” Obama said. Since Aug. 8, the military has conducted 106 air strikes in Iraq, according to U.S. Central Command.

Obama suggested that once he has a strategy for tackling ISIS, he would seek authorization from Congress, particularly since it may require additional funding. “It is my intention that Congress has to have some buy-in as representatives of the American people,” he said.

“This should be a wake-up call to Sunni, to [Shi‘ite], to everybody, that a group like ISIS is beyond the pale; that they have no vision or ideology beyond violence and chaos and the slaughter of innocent people,” Obama said. “And as a consequence, we’ve got to all join together — even if we have differences on a range of political issues — to make sure that they’re rooted out.”

Obama also condemned continued Russia aggression in Ukraine, following U.S. and NATO confirmation of Russian ground troops and heavy equipment fighting against the Ukrainian military in eastern Ukraine, but he stopped short of calling it an invasion. The President ruled out American military action in Ukraine, but said the U.S. stands with its NATO allies in the region and suggested that additional sanctions on Russia will be forthcoming.

“We are not taking military action to solve the Ukrainian problem,” Obama said. “What we’re doing is to mobilize the international community to apply pressure on Russia. But I think it is very important to recognize that a military solution to this problem is not going to be forthcoming.” 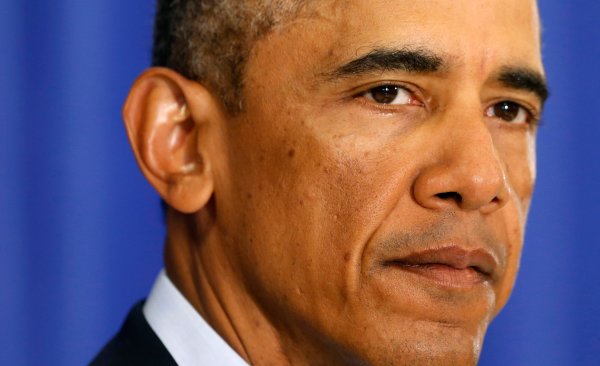 Washington Wrestles Over Syria
Next Up: Editor's Pick