The Knee Defender Is Cheating—And Of Course Guys Love It

If you have been busy following real news about people with real problems you might not know that on Sunday, on a flight between Newark and Denver, a woman dumped a cup of water on a man sitting behind her when he prevented her from reclining her seat back with a device called a Knee Defender.

There is absolutely no doubt in my mind that the man who purchased the Knee Defender and the woman who reclined her airplane seat into the knee defender and subsequently dumped a cup of water on his head are both total jerks. Anyone who can’t control themselves 40,000 in the air and causes stress for their fellow passengers and flight attendants needs to be alerted to the whole “other people in the world” thing. That said, the Knee Defender guy is probably more of a jerk than the woman who reclined. Why? Well, this is perhaps a bit of a sophomoric defense. But…

If you made a list of things you’d expect to see on an airplane, among “fellow travelers,” “suitcases” and “small packets of nuts,” you would also very likely list “reclining seats.” Reclining seats are to be expected, a known entity. They are part of the Social Contract.

Buying a Knee Defender is cheating. It is like insider trading, but worse, because not everyone expects to get rich. Everyone does expect to recline.

Another thing about the Knee Defender that sucks: its tagline (“Standing Up For The Right Of The Tall Guy to Sit Down”). I can just hear the company spokesperson(man) saying, “Women also buy the Knee Defender,” and I am sure that, indeed, the company has five or six female customers. But the fact that “guy” is in the tagline, well, it’s clear that the target market is a man who is absolutely horrified that he might have to be uncomfortable for a few hours, i.e. men.

Putting a giant thing up in the sky that moves through the air and needs to be scheduled in such a way that it doesn’t run into other giant things in the sky is complicated and expensive. I am not going to say that the airlines are our friends, but I think they have a lot to deal with. Gas costs a lot. Employees cost a lot. Weather happens. And you can’t ever make everyone happy.

Yes, the seats on airplanes are very small. I don’t think anyone would argue with that, except of course people who fly First Class all the time, and they are too busy complaining about paying taxes to complain about air travel. But air travel is mostly a miracle and a privilege. You can get from coast to coast in five hours, and you can do so because you have at least some disposable income. We’ve gotten so used to it, however, that we forget how amazing it is.

I can just hear the Knee Defender guy right now: So what am I supposed to do then? Just be squished for five hours? Well, until there’s a better solution, yes, squished—just like the rest of us. When it gets really bad, just think about how the Donner Party crossed the country. Now that is uncomfortable. 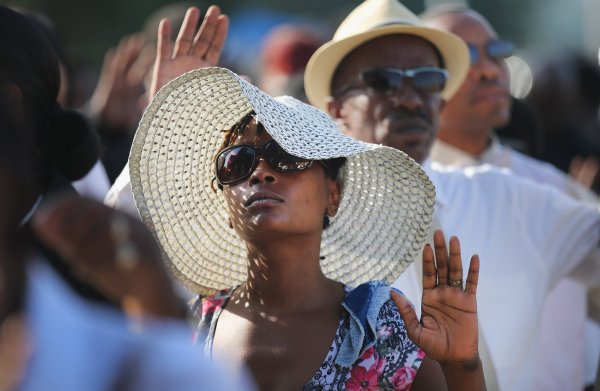 Ferguson: A Faithful Way Forward
Next Up: Editor's Pick