Emmys 2014: What to Expect When Bryan Cranston, Jon Hamm and True Detective Compete

The 2014 Primetime Emmy Awards air this Monday (not a typo!) Aug. 25th at 8pm E.T./5pm P.T., giving Bachelor in Paradise some stiff competition for Nielsen ratings.

Hosted by Seth Meyers of NBC’s Late Night, the show will honor the best that the television industry has to offer, which is a lot these days — if you’re not on boring old network television, that is. Between HBO’s True Detective, Veep and Game of Thrones, Netflix‘s Orange is the New Black and House of Cards and FX’s Louie and Fargo, cable and Netflix are likely to take the big prizes — especially HBO, as the network received a jaw-dropping 99 nominations.

The 2014 Emmys also mark the swan song of AMC’s Breaking Bad — and it’s likely that voters will want to mark the occasion by giving all the prizes to the one of the most critically acclaimed shows in recent memory (next to Barely Legal Pawn, obviously). In case you missed it when it was first announced, find a full list of nominees here.

Here are some predictions for the 2014 Emmys:

It’s hard to underestimate the strength and appeal of both The Big Bang Theory and Modern Family, but if they end up splitting the vote, it may give Veep a shot at the laurels — which is just the sort of campaign strategy Selina Meyer would like. Orange Is the New Black is the new kid on the block, but if voters are headed outside the primetime box, they should head straight to Louie — the show had a brilliant, dark and difficult season that pushed the boundaries of comedy.

Best Actress in a Comedy Series

Taylor Schilling has incredible range as an actress, but the fact that Orange is the New Black isn’t a laugh-out-loud comedy may work against her in this category. Julia Louis-Dreyfus consistently delivers on Veep, which is why she has won the last two years. While any politician knows that incumbents tend to win, this time we’re rooting for the underdog politician: Leslie Knope. Amy Poehler’s work on Parks & Recreation is genuinely hysterical and seemingly under-appreciated, and while she may be the dark horse candidate, she deserves the win.

Best Actor in a Comedy Series

With three trophies in this category, it’s clear that Emmy voters love The Big Bang Theory‘s Jim Parsons. This year, though, he has some stiff competition in Louis C.K. who delivered an intense, if not exactly laugh-out-loud performance — as well as William H. Macy for his multiple death scenes in Shameless.

While it’s hard to consider Girls a comedy, it’s nominated in the category, and Adam Driver did an excellent and nuanced job last season. Assuming the nominations of both Jesse Tyler Ferguson and Ty Burrell for Modern Family cancel each other out, expect Tony Hale to take home the title. It would be a well-deserved win, too — his work on Veep is understated, while also inducing actual LOLs. Though the same could be said of Andre Braugher’s work on Brooklyn Nine-Nine, Hale has the residual excitement over the return of Arrested Development in his favor.

Out of the nearly-40 year history of Saturday Night Live, only two other actresses have been nominated for Emmys (Kristen Wiig and Amy Poehler) while that bodes well for Kate McKinnon’s future, she probably won’t be able to wrest the title from Allison Janney for Mom. That said, it would be nice to see Kate Mulgrew rewarded for her work on Orange Is the New Black, especially as she was overlooked for years for her appearances on Star Trek: Voyager.

True Detective generated a lot of buzz in its debut season, but this was Breaking Bad‘s swan song; it deserves a win and earned it fairly with its carefully constructed, fan-pleasing ending. As fans of Lost, How I Met Your Mother and True Blood know, that isn’t easy to pull off.

Best Actress in a Drama Series

Julianna Margulies did incredible work on The Good Wife this year, on a season filled with mourning, misery and accounting woes. Fingers crossed that voters recognize it. (Crossing different fingers that Lizzy Caplan will eventually take home an award for her fine work in Masters of Sex.) Still, Claire Danes is the woman to beat this year — and every year that Homeland is nominated.

Should Win: Tatiana Maslany for Orphan Black — but because she wasn’t nominated, Julianna Margulies

Best Actor in a Drama Series

While Woody Harrelson and Matthew McConaughey both did phenomenal work in True Detective and Kevin Spacey wowed as a driven politico in House of Cards, this award belongs to Bryan Cranston. Sorry, Jon Hamm, but this is why AMC split the final season of Mad Men in two.

This is Aaron Paul’s last chance to win for his excellent work in Breaking Bad, so it’s likely that Emmy voters will reward his hard work (again). That said, Peter Dinklage took the role of Tyrion Lannister and infused it with humor, pathos and poignancy. In a show as jam-packed with talent as Game of Thrones, Dinklage still manages to make Tyrion the star. If there’s a dark horse in the race, it’s Josh Charles for his heartbreaking, vengeful work during his final season of The Good Wife.

Lena Headey rules as Cersei Lannister in Game of Thrones and while the last season of Downton Abbey wasn’t great, Joanne Froggatt delivered a memorable performance in a forgettable season. However, it’s Anna Gunn’s turn to take home the trophy for her role as Skyler White in Breaking Bad. To allay any doubts, go watch the scene where Gunn stabs her husband to save the children and then collapses on the ground as Walt walks out the door with the baby.

Ryan Murphy’s HBO film The Normal Heart wasn’t nominated, theoretically to clear the way for an American Horror Story: Coven win. But that show has some serious competition from HBO’s Treme, as well as FX’s Fargo. The television adaptation of the Coen brothers movie was unexpectedly thrilling, tense, gory and fun — but it will most likely have to take a bow in the wake of Treme‘s final season. 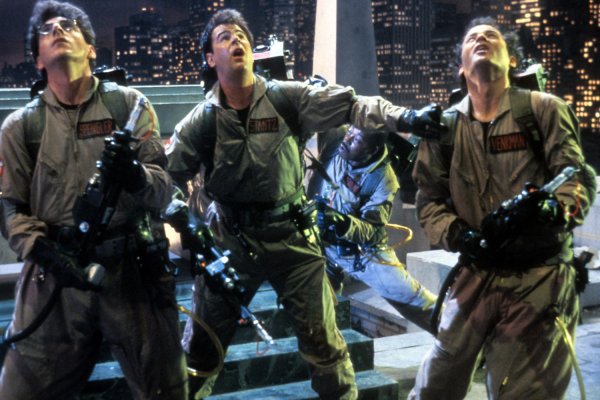 National Ghostbusters Day Is Today. Who You Gonna Call?
Next Up: Editor's Pick