Behold the Unhealthiest Meal You Can Eat at a Chain Restaurant

The Center for Science in the Public Interest (CSPI) has handed out their annual Xtreme Eating Awards to the fast food meals and chains that they deem the unhealthiest. After surveying over 200 chain restaurant menus for meals and combos that are especially high in calories, fat, sugar and salt, the winner of this year’s ignominious prize is a real monster. Specifically, Red Robin’s “monster-sized” A.1. peppercorn burger, served with “bottomless” fries and a “Monster” milkshake, which clocks in at a whopping 3,540 calories.

According to CSPI, it’s the “single unhealthiest” meal available at a chain restaurant, with 69 grams of saturated fat, 6,280 mg of sodium and an estimated almost three-quarters of a cup of added sugar. CSPI notes that to work off a meal of such, ahem, monstrous proportions, the average person would need to walk briskly for a full 12 hours, presumably not walking from one Red Robin to another. (One takeaway from this dubious distinction is that perhaps limiting one’s intake of foods preceded by the word “monster” should be step one towards healthy eating.)

Joining Red Robin in the winner’s circle for this ignoble prize is the Cheesecake Factory. While Red Robin won the top prize for its monster combo, the Cheesecake Factory earned itself three spots on the list. The popular chain’s Farfalle with Chicken and Roasted Garlic clocked in at 2,410 calories, which CSPI notes is “the calorie equivalent of a five-hour jog.” Also in the ranks are the Bruléed French Toast, which rang up 2,780 calories, and a Reese’s Peanut Butter Chocolate Cake Cheesecake that contained 1,500 calories. Yes, the cheesecake had almost one thousand fewer calories than the innocent sounding chicken and pasta dish. Luckily the restaurant has many “Skinnylicious” menu options that make it easier to make healthier choices.

Consumers can make healthier eating choices at chain restaurants as they increasingly add low calorie, low carb and weight watching friendly items to their menus. For example, at Red Robin you could swap french fries for steamed broccoli, but that’s a different type of monster entirely. 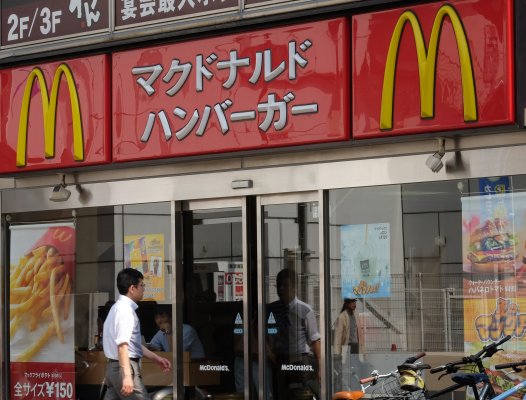 You Can Now Get Tofu McNuggets at McDonald's in Japan
Next Up: Editor's Pick