Who is the next star of The Bachelor?

After The Bachelorette star Andi Dorfman made her choice, fans’ attention quickly shifted from Nick or Josh to who would star in the next installment of the popular franchise. The star is usually announced during the After the Final Rose show, but last night, host Chris Harrison pat popular Bachelorette contestant Farmer Chris on the shoulder and said the decision would be made later. Who or what could the show be waiting on?

One guess is that the producers were testing finalist Nick V.’s audience appeal during his appearance on last night’s After the Final Rose show. While Nick may have earned some sympathy votes from soft-hearted fans sad to see him discarded in the final moments of the show, his frequent attempts to see Andi in person went from seeking closure to full-on creepy. Plus, his decision to shame Andi for sleeping with him in the Fantasy Suite when she wasn’t convinced she should marry him was unnecessary and harsh, especially as it’s been a longstanding Bachelor tradition that what happens in the Fantasy Suite stays in the Fantasy Suite. After that display — and in the wake of least favorite Bachelor Juan Pablo Galavis — Nick’s most likely out of the running to be America’s next top bachelor.

If the producers are looking for the anti-Juan Pablo, they need look no farther than Farmer Chris. The Iowa native is a sweet, soft-spoken man who has proven himself to be a fan favorite (one fan even gave him her phone number during The Men Tell All episode). Aside from the fact that she sent him packing, he also has Andi’s seal of approval. “I mean, look at him,” she told People. “Chris has the whole package. He is the all-American guy who is a farmer who does not look like a farmer, but he’s also successful and he’s ready for a family. He’s going to be a great husband and a great father.”

However, the producers may be concerned that casting Chris could turn The Bachelor franchise into an unwanted reboot of another reality show — the blessedly short-lived Farmer Wants A Wife. That show, which lived for one season on The CW Network, featured eight women vying for the affections of a strapping bachelor farmer — a premise that might be too close for the producers’ comfort. Also, while Chris is affable and romantic, he was also incredibly taciturn on the show. The strong-and-silent type doesn’t play well on television. Chris may be getting some behind-the-scenes prep work by agents, acting coaches and producers in preparation for being a star, but he may also be spending his time polishing his FarmersOnly.com dating profile. No doubt someone at that website is eyeballing a Bachelor crossover deal.

Another Bachelorette fan favorite was Marcus, another contestant tossed aside during Andi’s journey to love. However, rumor (a.k.a. US Weekly) has it that he’s engaged to someone he met on Bachelor in Paradise — Lacy Faddoul, one of the women who mercifully escaped the clutches of Juan Pablo on The Bachelor. An engagement would probably keep him out of the running to be the next Bachelor, but if he winds up heartbroken or left at the altar, there is still a shot of handing out roses to women ready to pick up the pieces with him.

There’s also a chance that blast from The Bachelorette‘s past may take up the mantle of Man in Chief on The Bachelor. US Weekly reports that Arie Luyendyk Jr. may be angling for a return to the reality TV spotlight. The tall, dark and handsome race car driver was the runner-up on Bachelorette Emily Maynard’s season (she chose philanthropist and entrepreneur Jef for a short-lived romance). In the wake of his broken heart, Arie went on to date infamous Bachelor contestant Courtney Robertson in the wake of her break-up with Bachelor Ben Flajnik. A flow chart might be necessary to keep this all straight, but many fans of the show would be willing to watch Arie find love.

Finally, there’s Marquel Martin. The cookie-loving, straight-talking, funny and charismatic contestant was left on the side of Andi’s road to love, but he was already a fan favorite. Not only did he gracefully handle uncomfortable situations with other contestants, but he did it with forthright charm and wit. While there was some speculation that Marquel may not want to be known as the show’s “first African-American Bachelor,” he may be coming around. “Am I opposed to it? Absolutely not,” Martin told E! about the possibility of being cast as The Bachelor. “That is something…to talk with my family about if I was afforded that opportunity. Obviously, right now I’m not thinking about that because I don’t know if that’s even an option.” The only thing standing in his way? Being cast on Bachelor in Paradise. Typically the show only sends its B-team players to the island of misfit boys and girls, but things may be changing on the show in the wake of Juan Pablo and producers may want to see how a fan favorite fits into the Bachelor universe before making him their star.

So who will it be? We’re still Team Marquel. Alternatively, we’ll accept Grumpy Cat, whose surprise appearance on After the Final Rose qualifies her for casting.

MORE: The Bachelorette Watch: 11 Things We Learned When the Men Tell All 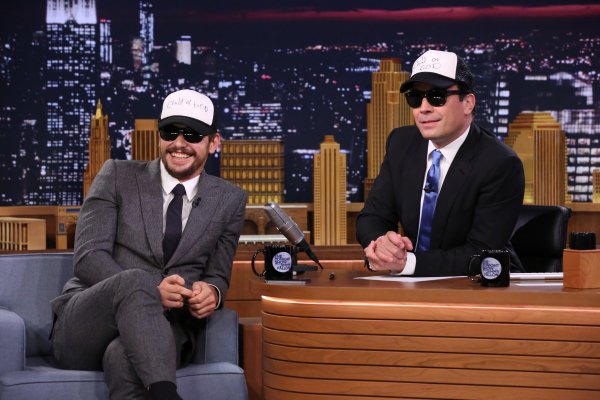 James Franco Teaches Jimmy Fallon How to Take Selfies
Next Up: Editor's Pick