Three twenty-something guys, armed with smart phones and a neon yellow soccer ball, are scrambling in different directions in a crowded New York City Whole Foods. Shaun McBride just maneuvered around bandana-wearing Chris Carmichael to score a “goal” into a shopping cart, and now they have to escape before getting caught by startled shoppers or, worse, security.

“I got the shot!” says Jerome Jarre, breathing heavily outside of the grocery store. It is 30 minutes before the beginning of this month’s World Cup final, and they have to finish their Snapchat Story before the game starts. Together, the trio has an audience of almost 2 million people, and pockets of the fans have gathered around Union Square to take pictures of the social media personalities.

They are among the first viral stars of Snapchat, a popular mobile app created in 2011 on the premise that friends would send each other photos, videos, and doodles that would self-destruct in 10 seconds or less. Unlike Instagram or Vine, it wasn’t built to be a sharing platform to broadcast creative content to the masses but to be shared intimately with acquaintances. But Snapchat has grown up fast and now large companies are trying to reach its audience and are handing some of its most loved users six-figure paychecks to do it.

Building a Staying Following on a Disappearing Medium

When Jin Long Shi, 14, saw on Snapchat that his favorite social media celebrities were just a few blocks away, he ran out of his apartment — only stopping to buy them a box of Munchkins from Dunkin’ Donuts — to watch them shoot. “Before this, I didn’t know you could have followers on Snapchat and create stories, I thought you just used it to take selfies and send funny things to friends,” Shi says.

Shi came primarily for Jarre, 24, who describes himself as an “outgoing Borat Frenchman.” His creative niche is slapstick and playing pranks on strangers. Jarre gained his celebrity from his 6-million follower Vine account, but he has recently transitioned his focus primarily to Snapchat after downloading it a month ago.

“Why would Christophe Colomb go to America? Why would we go to the moon? It’s fresh, anything can happen there,” he says.

Jarre, who has 1.2 million Snapchat followers, says that the new medium is building his portfolio from 6-second videos to 2-minute narratives and increasing his followers. (Snapchat launched a Story feature in October that allows users to create a longer narrative that is displayed to all of their friends, rather than directly send to select followers, that lasts a 24-hours and can be viewed multiple times.) After 18 months on Vine, he had accumulated 800,000 Instagram followers. After three weeks on Snapchat, that number grew 1.3 million. Jarre shared his Story statistics, showing his zany narratives — “that always end with a positive message” — get viewed upwards of 1.1 million times and screen grabbed upwards of 43.9K times:

Snapchat story data shows how many people viewed and taken a screenshot of a user's content.
Jerome Jarre

“It’s the most viral platform ever because people need to screenshot, share, and talk to their friends,” Jarre says. “Because it is disappearing in 24-hours, they have to tell their friends or else no one will see it… There’s an insane word of mouth power. That’s how Shaun gained his followers from scratch.”

Shaun McBride, whose “Shonduras” Snapchat account has more than 140,000 followers, is known by brands, social media celebrities and agencies as a Snapchat pioneer. The 27-year-old snowboard sales rep from Ogden, Utah is a self-proclaimed member of the “Facebook generation,” and he didn’t have a social media presence at all until his six sisters, who are in high school and therefore Snapchat’s key demographic, pressured him into making a Snapchat account in November.

McBride’s Snapchat specialty is turning the ordinary into the extraordinary, and often silly, with detailed finger doodles over pictures. This caught on with his sisters’ friends and soon their entire high school had requested to follow him. He started getting notifications that his photographs of silly scenarios, like pictures of dogs he turned into Disney princesses with Snapchat’s drawing tools, were getting screen-shot hundreds of times. McBride says that when he would send out prompts to followers, asking them to send in a picture of a quarter in exchange for a personalized drawing, “Thousands of people sent me pictures of quarters. I spent the whole day snapping them back because I didn’t want to be rude. I was like, is this for realz?”

How to Engage With Snapchat Followers

As McBride’s following grew from hundreds to tens of thousands, he began building a presence on other social media sites so that his fans could see his content even after it disappeared. This is when his work started getting picked up by media outlets and companies (including Taco Bell, Disney, and MLS) began reaching out to work with him. That’s one of the ironies of Snapchat celebrity: It depends on screengrabs from other social media platforms like Instagram and Twitter.

“Snapchat is not like Twitter and Facebook, it’s not about likes, it’s not about followers,” Snapchat spokesperson Mary Ritti says, noting that the app doesn’t even track the number of Snapchat friends people have.

“Maybe it’s just a too cool thing,” says Molly Mitchell (Snapchat name: biggie_molls), who does marketing at men’s short-shorts company Chubbies. “Snapchat is the hipster of the social media world. It’s elusive and you need someone else’s commonplace app to purvey its content.” Mitchell gained brief Snapchat celebrity after she created an Instagram account chronicling the Snapchats she sent her friends of her relationship with her boyfriend.

Over the four hours of storyboarding and shooting their 86-second World Cup Snapchat, Jarre, McBride, and Carmichael discuss the possibilities of posting videos of their stories on YouTube.

Carmichael, (Snapchat name: ChrisCarm), keeps a Tumblr to showcase his comic book-esque Snapchat stories, which often end on cliffhangers. “My theme is that my bandana talks to me, and it’s my mentor,” Carmichael, 27, says. “It takes me on an adventure. A big story that is never ending.”

A panel from one of Carmichael's Snapchat stories
ChrisCarm

Since the medium is still young, Snapchat users are working together to find the best way to engage with fans. One of McBride’s first collaborations was with Boston-based Michael Platco (Snapchat name: mplatco), who doodled on red gloves to have a cross-country boxing match. They asked fans to Snapchat in who they wanted to win, so that they would have influence over the match.

Shortly after the boxing match, which ended in a draw, Disney flew McBride to Disneyland and Platco to Disneyworld to simultaneously launch the theme parks’ Snapchat accounts in their first-ever paid Snapchat gigs. Since then, Platco has worked with food site GrubHub and “Harry Potter” fan site MuggleNet. (He is very active in the Snapchat-Harry Potter market, which does, in fact, exist).

Just as companies pay top social media users for their Instagram and Vine abilities, they are starting to shell out cash to those who “get” Snapchat. And for good reason. The popular communication tool has a stronghold on a very young, obsessive and viral-savvy demographic of potential buyers—although the company doesn’t disclose figures, it has an estimated 30 million active monthly users, 71% of whom are under 25.

Compensation ranges widely. Consulting can pay up to $150 an hour and although Snapchatters and companies wouldn’t publicly disclose specific payments, two top Snapchat users said that the most coveted stars now earn anywhere from $1,500 a day to more than $100,000 for a week’s work for a company. That’s in the ballpark of what influencers on other social platforms are getting paid. Marcus Johns told Business Insider that a Vine ad campaign paid off his college tuition, and advertisers have sent influential Instagram users on fully paid trips around the world to Instagram events from their accounts.

Some companies have been hesitant to invest in Snapchat since the branded content doesn’t have a permanent afterlife, as it would on Instagram. But Vayner Media founder Gary Vaynerchuk, a leading social media adviser, thinks discounting Snapchat is shortsighted.

“Why anybody thought that a disappearing piece of content isn’t valuable is insane to me,” says Vaynerchuk, explaining that before technology existed to record television shows, the content within the commercial breaks disappeared. “Last time I checked, when I’m listening to a car commercial on Z100, that sh-t disappeared.”

Vaynerchuk and Jarre co-founded GrapeStory, an agency that pairs top Vine, Instagram, and now Snapchat users including McBride with companies. Sour Patch worked with GrapeStory and Logan Paul, a social media leader, to launch its Snapchat account in early July, and Sonic will use another top user to launch its account in August.

When McBride walked around the grounds of DisneyLand in a Mickey Mouse hat that read “Shonduras” over Memorial Day weekend, he thought that Snapchat had the potential to supplement some of his income as a fun side business and creative outlet.

“This month, I hope to make more than I did last year in my real job,” he says. “It’s insane.” 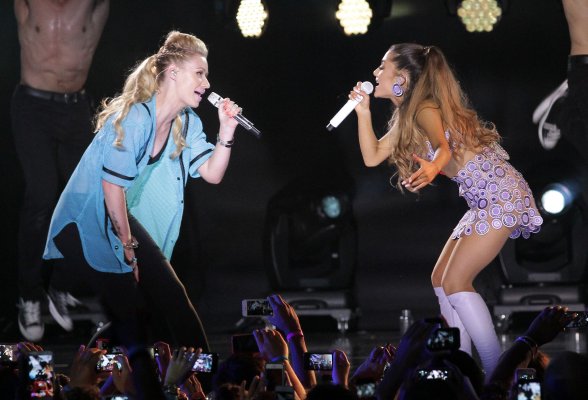 Watch a Little Girl and Her Dad Dance to Ariana Grande's "Problem"
Next Up: Editor's Pick