I don’t think anyone in their right mind would suggest that the lawsuit Lindsay Lohan filed last week against the makers of Grand Theft Auto isn’t annoying. Yes, it would be nice if Lindsay would go back to being an actual movie star, rather than wasting precious time insisting that her “unequivocal” similarity to Lacey Jonas, a minor character in Grand Theft Auto 5, entitles her to compensation. And yes it would be nice if this weren’t Lohan’s third similar lawsuit. But the fact is, like her or not, the 28-year-old actress/docu-drama subject/paparazzi bait might in fact have a bare, slightly bruised leg to stand on.

Lindsay Lohan is not someone you’d want taking care of your grandmother or even your guppy. But that’s not what’s in question here. What is—put so well in Forbes by intellectual property attorney Kim Landsman—is this: “How recognizable is Lindsay Lohan as the Lacey Jonas character? Would it be recognized specifically as her or as a generic, blond, bimbo actress?” It seems to me that the answers are a. very and b. yes.

Obviously there’s the fact that the hotel in the game, Gentry Manor, brings to mind Chateau Marmont, a place Lindsay has frequented. Then there’s the whole running away from the paparazzi thing that’s pretty Lilo-esque. But let’s get to the stuff that’s more exclusively her. First of all, Lacey’s voice. The way that she makes a declarative, despairing statement “This is a disaster!” and then rambles “Oh my God, I’m so f—ing fat. Oh my God! They cannot get a shot of me!” and then throws out a generally desperate and kind of unanswerable question “How’s my hair? Do I look cute?” Sorry, Rockstar — that is not a “generic” voice, or “generic” speech patterns. No one else sort of wails at the end of everything she says quite like Lohan. And if you don’t know what I mean, please enjoy this clip of Lohan on her reality show upbraiding her assistant for not getting her new keys made fast enough.

Then there are the outfits, which Lacey wears not only in the game but also in promotional material, that the lawsuit mentions explicitly and at great length as being Lohann-y. If I were the Lohan legal team I would forget about the stuff that sort of looks like Lohan would wear it — Lohan did not invent or perfect the short-short, high-heels, 800-necklace look — and concentrate instead on the image for Grand Theft Auto’s cover, which is a blonde model in a bikini giving the peace sign and taking a selfie. Model Shelby Welinder posed for the ads in 2012, but the Lohan photo that looks EXACTLY like it was taken in 2007. Also, if you said to three million people, “Hey, you know that picture of a blonde chick taking a selfie and giving the peace sign, in a bikini? Who is she?” two million of them would say “What?” but the other million would say “Lindsay Lohan,” and the number of people saying, ‘Oh, isn’t that Shelby Welinder?” well, that would be zero.

Finally, there’s Lacey’s personality. She’s demanding, yelling to the poor motorcycle racing protagonist she’s forced into giving her a ride “Go faster! Go faster.” But demanding is pretty basic. Lacey could just as well be channeling Mariah Carey. Or even Katherine Heigl, if Heigl weren’t more of a stay-at-home complainer, with no personality to rip off. If demanding is too broad a category to make GTA 5’s work “unequivocally” Lohan-inspired, then there’s the arrogance: Lacey shouts “I’m really famous!” and is generally appalled that the motorcyclist doesn’t know who she is. Only a few actors have been caught pulling the fame card, Lindsay among them. (Lindsay’s mother Dina even asked someone “Do you know who I am?”)

Lindsay Lohan might not be the classiest person around, but she’s special in other ways. Not everyone can say theyowe the Chateau Marmont $46,000. Not everyone can claim to be America’s sweetheart and then run over it all with a limo. And not everyone can lie to Oprah. There is only one Lindsay, and surely, at this point, she’s at least got a right to that.

Sarah Miller writes for NewYorker.com and The Hairpin, among other outlets, and has published two novels, Inside the Mind of Gideon Rayburn and The Other Girl. 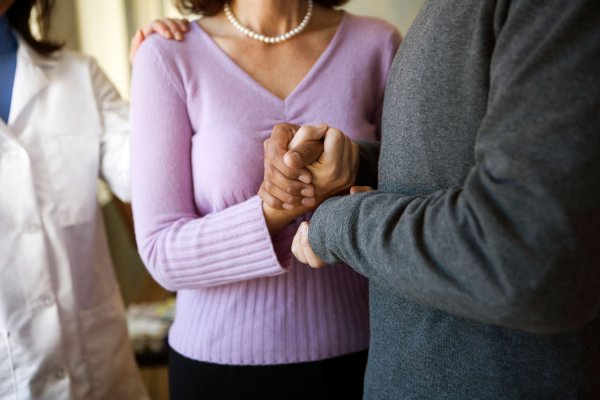 Quitting the Cancer 'Battle'
Next Up: Editor's Pick