Supportes of employer-paid birth control rally in front of the Supreme Court before the decision in Burwell v. Hobby Lobby Stores was announced June 30, 2014 in Washington, DC.
Chip Somodevilla—Getty Images
By Cecile Richards

On Monday, the Supreme Court ruled that it’s better to be a corporation than a woman in America. In a devastating ruling, the Court gave CEOs of some closely held profit-making corporations the right to deny their employees coverage for birth control because of the CEO’s personal objections – even if those objections are not supported by science or medicine.

The Court’s ruling has unleashed an outcry from people across the country who are incredulous that decisions about women’s health are being made – yet again – by judges and politicians who will never need to use birth control. This decision — by five male Justices — opens the door for corporations to interfere in the private health decisions of their employees, who happen to be women. Both the Hobby Lobby ruling and the recent decision striking down protections for women entering healthcare centers that provide abortion reflect a staggering lack of awareness of what women have to go through to get health care. It’s no coincidence that all three women on the Court signed the dissent, which spoke to the realities of women’s lives and sounded an alarm. As Ruth Bader Ginsburg wrote, the Court “has entered a minefield.”

The decision in favor of Hobby Lobby and Conestoga Wood Specialties sets a dangerous new legal precedent treating some, perhaps all, for-profit corporations as if they were people, fully capable of expressing deeply held religious beliefs. The result? Some corporate owners have been given a free pass from following the law if they claim that doing so violates their religious beliefs – allowing them to enjoy both the legal protections of being a corporation and the privileges of being a person.

It’s unbelievable that in 2014, we’re still fighting for access to birth control – but we are. Ninety-nine percent of women in this country have used birth control at some point in their lives, including 98% of Catholic women. For millions of women in this country, the only thing controversial about birth control is the fact that we’re still fighting to have this basic health care covered by insurance – especially given the overwhelming evidence that birth control, when used correctly, has a host of health and medical benefits. It can help relieve painful menstrual cramps, avert infertility by addressing the symptoms of endometriosis, and – shockingly – prevent unintended pregnancy.

Birth control is only a social issue if you’ve never had to pay for it. Many women pay an average of $600 a year — and sometimes much more — for contraceptives. A 2010 survey found that more than one-third of women voters have struggled to afford prescription birth control at some point in their lives – but when they have access to it, they can support themselves financially, complete their education, and plan their families and have children when they are ready. It’s good for women, it’s good for families, and it’s good for this country.

Here’s the good news: Despite the Supreme Court, the birth control benefit of the Affordable Care Act remains in place. More than 30 million women already have access to this benefit, and in its first full year, women saved an incredible $483 million more on birth control prescriptions than they did the year before. This is the biggest step forward for women in a generation.

The real consequence of this ruling is that it invites “closely held corporations” to pick and choose what methods of birth control are covered by insurance. Far from a narrow ruling, the Court’s decision affects enormous for-profit companies employing thousands of women and more than half of the workforce in this country. This is unacceptable, and we have heard from members of Congress, the White House, and numerous medical groups including the American College of Obstetricians and Gynecologists, the American Medical Association, the American College of Physicians, the American Academy of Pediatrics, and the American Nurses Association—all of whom are fighting alongside Planned Parenthood to make sure that women have access to affordable birth control. We’re working with women’s health champions in Congress to ensure they protect and expand women’s access to no-copay birth control, and we encourage companies to do the right thing and provide women full birth control coverage. And we’ll take this fight to the ballot box in November, showing women across the country where candidates in their state stand on their access to birth control.

Meanwhile, our #JointheDissent campaign lit up the social media landscape, with nearly 6 million people seeing and sharing our campaign information with their friends on Facebook in the first day alone. Even if the Supreme Court doesn’t understand what’s at stake for women, Americans around the country do.

The bottom line: Our health care decisions are not our bosses’ business – and neither is our use of birth control, for any reason. That we even need to argue this point is incredible – but politicians, corporations and the Court need to hear from women.

Cecile Richards is the president of Planned Parenthood Action Fund. 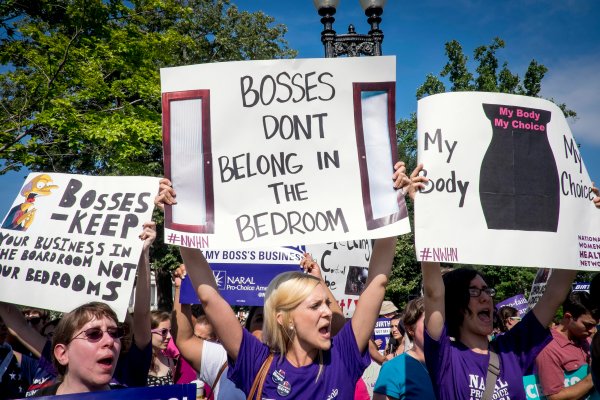 5 Things Women Need to Know About the Hobby Lobby Ruling
Next Up: Editor's Pick