Everything You Need to Know About Google I/O 2014

David Singleton, Director of Engineering at Android, introduces LG G Watch during the Google I/O keynote at the the Moscone Center, on Wednesday, June 25, 2014, in San Francisco.
Jed Jacobsohn—LG Electronics/AP
By Jack Linshi

Google I/O, the search and data giant’s annual developer conference, made one thing clear: the Android operating system is coming for you. At a nearly three-hour-long keynote presentation held in San Francisco on Wednesday, Google executives and engineers showed off new products aimed at nearly every facet of most Americans’ lives. Android-powered devices are coming to cars, living rooms, and wrists, among other places.

Google showed off the newest version of its upcoming Android operating system, with VP of design Matias Duarte helming the stage to talk about “L”—short for “Lollipop.” Duarte walked through a range of interface-related features including lending pixels “depth” and giving on-screen objects greater dimension. Objects in L can have physical surfaces and edges with accurate perspectives and shadows, noted Duarte.

The company showed the first in-depth look at its upcoming operating system for smartwatches, dubbed Android Wear. Wearable devices using the system will be an extension of users’ smartphones, scrolling through notifications from both phone apps and apps built into new gadgets. Executives demonstrated emails, appointments, weather updates and text messages popping up on connected watches.

Google also renewed its assault on the living room with Android TV. Android TV, which can be incorporated into smart TVs, set-top-boxes and video game consoles, allows people to switch between streaming apps like Netflix, downloaded movies and video games from the Google Play store. A variety of devices, from smartphones to tablets to video game controllers, can be used to control Android TV. The platform will also make extensive use of Google search, allowing users to not only look up specific shows but also less obvious parameters like Oscar winners from a specific year.

Android TV is a follow-up to Google TV, the company’s first foray into creating TV software, which failed to gain widespread adoption. This time around, Google seems to be focusing on creating a platform more squarely focused on entertainment and ease of use. The platform will enter a crowded market that already includes Apple, Amazon and Roku, but the company did announce some key early partners like Sony and Sharp.

The other major advantage? Android. 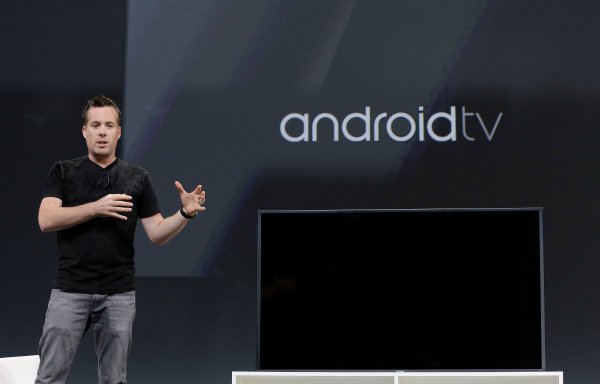 Google's Invading the Living Room (Again) With Android TV
Next Up: Editor's Pick