This Marijuana Food Truck Can Get You High

The Samich truck's take on PB&J
MagicalButter.com
By Olivia B. Waxman

The “munchies” are going artisanal. After debuting in Denver on 4/20, a marijuana food truck is expected to open at a farmer’s market in Washington state this weekend.

But will its meals get customers high?

Customers will be able to choose between four cannabis-infused meals at Jet City Farmer’s Market in the city of Everett, Wash. between 11:00 a.m. and 7:00 p.m. Saturday and Sunday:

The Samich truck is a promotion for Angel’s company MagicalButter.com, which sells an appliance intended to help people make cannabis-infused cooking oils at home and wants to market itself to medical marijuana patients.

All dishes are in the suggested serving size, which is worth noting in light of growing food safety concerns about pot edibles. Maureen Dowd recently wrote a column in the New York Times about getting uncomfortably high from eating an entire pot chocolate bar in Denver because the label didn’t warn novices to break it up into 16 pieces. Last month, Colorado Governor John Hickenlooper signed two safety bills to both ensure labels are not misleading and attempt to determine an appropriate serving size of concentrated marijuana to prevent overeating in light of recent deaths.

In Washington state, regulations require samples to pass a “microbiological screening” and commercial pot kitchens to be inspected before such chefs can be licensed, the Associated Press recently reported. Marijuana retail sales are expected to start in a couple of weeks, and Governor Jay Inslee just announced an “emergency set of rules” ordering approval of marijuana edible packaging to make sure there are not cartoonish images that may appeal to children, The New York Times reports this week.

In general, when it comes to consuming cannabis-infused food and drink as safely as possible, “If you don’t know what you’re doing, less is more,” says Angel. “Take it slow.” 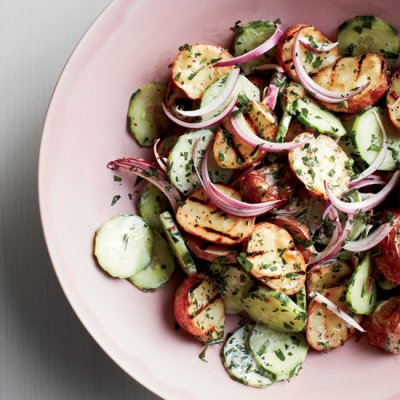 6 Ways to Create Your Signature Potato Salad
Next Up: Editor's Pick