Admit it, guys: You don’t even like going to the doctor when there’s something wrong, let alone for preventative check-ups. But being proactive about your health—by getting recommended screenings for serious conditions and diseases—could mean you’ll spend less time at the doctor’s office down the road.

Depending on age, family history, and lifestyle factors, people need different tests at different times in their lives. Here’s a good overview for all men to keep in mind.

You may never need a screening for diabetes if you maintain a healthy weight and have no other risk factors for the disease (such as high cholesterol or high blood pressure). But for most men over 45—especially overweight men—a fasting plasma glucose test, or an A1C test, is a good idea, says Kevin Polsley, MD, assistant professor of internal medicine at Loyola University Health System in Chicago.

The U.S. Department of Health and Human Services also recommends diabetes screenings for overweight adults younger than 45 who have a family history of the disease, or who are of African American, Asian American, Latino, Native American, or Pacific Islander descent.

Health.com: Could You Have Type 2? 10 Diabetes Symptoms

Even if you’ve been in a monogamous relationship for years, it’s not a bad idea to get tested if you haven’t already done so. Many common sexually transmitted infections can go undiagnosed for years. For example, people can go as long as 10 years without showing symptoms of HIV. The U.S. Preventive Services Task Force recommends that everyone ages 15 to 65 be screened for HIV at least once. This is especially important, Dr. Polsley says, if you have had unprotected sex, used injected drugs, or had a blood transfusion between 1978 and 1985.

In addition, the Centers for Disease Control and Prevention recommends a one-time hepatitis C screening for all adults born between 1945 and 1965, regardless of risk factors. “Believe it or not, there’s a lot of hepatitis C cases out there in which people either don’t have symptoms yet or don’t know what’s causing their symptoms,” says Dr. Polsley. “Screening for STIs is something I offer as routine at just about every physical, regardless of a patient’s age or health history.”

You don’t need to make an appointment to figure out your body mass index, a measure of body fat based on your height and weight. Regardless of whether you calculate this stat yourself or your physician does the math for you, it’s important to be aware of this number, says Dr. Polsley.

A BMI between 18.5 and 24.9 is considered normal weight. Although this calculation isn’t perfect—and can sometimes label healthy people as overweight or vice versa—most doctors agree that it’s still an important component of assessing overall health. “It can be a very good opportunity to discuss diet and exercise, and to show our patients how important these things are,” Dr. Polsley says.

The American Heart Association recommends men have their cholesterol levels tested every four to six years once they turn 20. “Men have an overall higher risk for cardiovascular disease than women, and high cholesterol is often a big part of that,” Dr. Polsley says. But your doctor may want to screen you earlier (and more often) if you have heart disease risk factors such as diabetes, tobacco use, or high blood pressure.

Like high cholesterol, high blood pressure is often a symptomless condition—but luckily, the test for hypertension is quick and painless, involving a rubber cuff that squeezes the arm and measures the flow of blood through a large artery in the bicep. “You should have your blood pressure checked pretty much every time you see your doctor,” says Dr. Polsley, starting at age 18.

Don’t get to the doc often? Have it checked at least every two years, or yearly if your numbers were previously considered borderline (a top “systolic” number above 120 or bottom “diastolic” number higher than 80).

You can check your blood pressure at health fairs, in pharmacies, or at home with a monitoring device. If your systolic pressure cracks 130 or your diastolic goes over 85, your doctor may recommend lifestyle modifications—like exercising more and eating less salt—or they might prescribe medication.

Most men should be screened for colon cancer beginning at age 50, but those with a family history of the disease may benefit from earlier testing. Men and women alike tend to dread this test—in which a small camera is inserted into the anus and explores the large intestine for polyps or other signs of cancer—but Dr. Polsley says it’s not as bad as it sounds.

“The preparation for the test is actually the worst part,” he says: You’ll need to empty your bowls completely before the exam, which may involve not eating solid foods for one to three days, drinking lots of clear liquids, or taking laxatives. “The actual colonoscopy shouldn’t be too uncomfortable, because you’re sedated through the whole thing.”

But here’s the bright side: If your doctor doesn’t find anything suspicious, you won’t need another colonoscopy for up to 10 years.

Screening for prostate cancer is more controversial than for other cancers, says Dr. Polsley, and some studies have shown that these tests can be expensive and unnecessary, and may do more harm than good. But he suggests that all men over 50 at least talk with their doctors about the pros and cons of these tests—usually either a digital rectal exam (in which the doctor inserts a gloved finger, or digit, into the rectum to feel for lumps and abnormalities) and a PSA test, which measures a protein called prostate-specific antigen in the blood.

Prostate cancer screenings can and do save lives, but they may also result in false-positive or false-negative results. And because many cases of prostate cancer progress very slowly, some men (especially older men) don’t benefit from aggressive treatment. Whether you decide to get screened for prostate cancer should be a decision you make with your doctor, says Dr. Polsley. In the meantime, it’s important to know the symptoms of an enlarged prostate—like having to urinate frequently or having trouble urinating—which could also signal cancer. 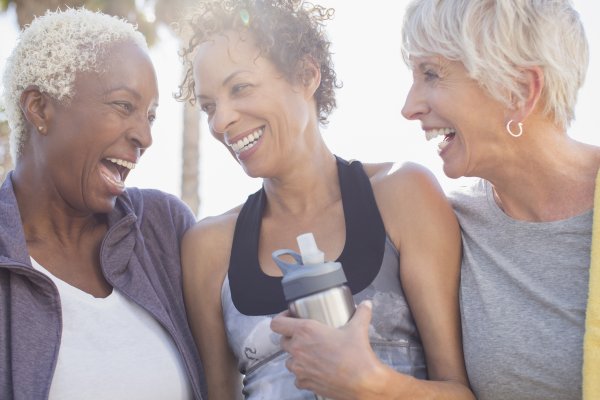