There will be no summer vacation for Facebook — the company is spending the season trying to convince small businesses to buy more ads on the social network. The company hosted the first in a series of marketing training sessions Tuesday in New York, attracting hundreds of small business owners from around the city looking to boost their sales.

Facebook has recently faced backlash from small business owners as the reach of Facebook Pages continues to sag. A recent study of 100 brand Pages found that posts were being seen by just six percent of users who “liked” the Pages. And Facebook has said the problem will only get worse. “The past is often a good predictor of what’s going to happen,” Dan Levy, Facebook’s director of small business, said at the event. “We’ve obviously seen the number go down.”

Some frustrated business owners have cast the decline as a bait-and-switch meant to force businesses to buy ads to make their Pages useful. Facebook says the issue is a logical outcome for a social network where more and more users are posting more content every month.

“The organic reach issue is not about us making more money,” Levy said. “The natural extension of Facebook becoming popular and people having more friends and liking more Pages is there’s just more and more stories to choose from every day. We have to choose which ones are going to keep them engaged on Facebook.”

Controversy over reach has not stopped businesses from opening new Pages. Facebook revealed that 30 million small business owners now have active Pages, up from 25 million at the end of 2013. 19 million of these small businesses manage their pages via mobile devices, and 1 million businesses in total advertise on Facebook each month.

Manny Pena, a restaurant owner in New York who was featured on the Q&A panel, said he had not seen the reach of his posts decrease significantly. He spends his entire $250 monthly advertising budget on Facebook and uses his restaurant’s Page as the company’s website. “It was a great resource for us,” he said.

Facebook is also promoting a handful of newly released tools to help small businesses serve highly targeted ads. A new feature called lookalike targeting allows a business to market to people similar to their current customer base, while another tool lets businesses market to clients on their e-mail lists who might not be a fan of their Facebook page.

“It’s an investment in reaching the people who matter to you,” Levy said in his pitch to marketers. 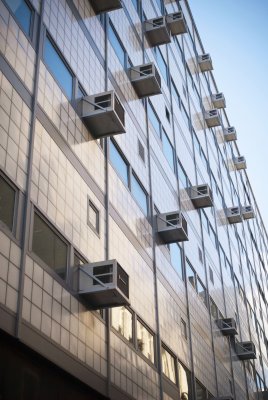 Uber to Cool Off NYC with Air Conditioner Delivery
Next Up: Editor's Pick