The Winners and Losers in Crimea's Vote for Secession

Sergei Yurchenko, the leader of a pro-Russian paramilitary force in Crimea, stands at a lookout point over his hometown Bakhchysarai, on March 16, 2014.
Yuri Kozyrev—NOOR for TIME
By Simon Shuster

Around lunchtime on Sunday, Sergei Yurchenko, a pro-Russia militia leader in the region of Crimea, got a call on his cell phone from an officer of the SBU secret police, Ukraine’s successor to the Soviet-era KGB. He knew many of its agents well. Hardly a year has passed since they investigated him on charges of separatism. Since the early 2000s, when he first began training pro-Russia paramilitaries in Crimea, the Ukrainian agents would often subject him to interrogations about his political views, and they would supervise police raids on his training camps in Crimea to search for weapons and ammunition. Now, those same agents are essentially working for him.

“Hey, Kolya,” Yurchenko said into the phone, using a nickname for the agent, as he drove through the streets of the Crimean city of Bakhchysarai in his SUV. “What’s the good word?” The agent on the other end of the phone asked him to come to a local polling station, where the residents were voting in a referendum on Sunday to allow Russia to annex Crimea. Later in the day the referendum passed overwhelmingly, setting the stage for further confrontation between Russia and Ukraine and its Western allies. But when the agent called, the voting was still under way. The man who once investigated Yurchenko was now requesting his presence to help coordinate the local militiamen who were in charge of policing the vote. “Sure,” said Yurchenko, “I’ll be there in a bit.”

The role reversal between Yurchenko and his former persecutors from the SBU, whose full name is the Security Service of Ukraine, epitomizes the way that Sunday’s referendum has turned the ruling order in Crimea upside down. The local separatists and their ethnic Russian supporters are having the time of their lives, and Yurchenko’s paramilitary group, the Cossacks, is now very much in charge of this part of Crimea. “This is a dream come true for us, of course,” he told TIME while driving around to his city’s polling stations. “We’ve been waiting for most of our lives to reunite with our Russian brothers.”

Judging by the results of Sunday’s referendum, so have most people on the Crimean peninsula. The Crimean electoral commission announced that 83% of the peninsula’s registered voters had cast their ballots, and 95% of them had voted in favor of becoming a part of Russia. That may seem like an impossible result, the mark of a rigged election. And in some ways it was. The vote was held during a Russian military occupation of Crimea and the ballot did not offer voters the option of keeping their current status in Ukraine. The choice on the ballot was between sweeping autonomy from the government in Kiev and Russian annexation of the peninsula.

But Yurchenko and the other organizers of the referendum did not have to stuff any ballot boxes to get the results they wanted. More than half of Crimea’s residents are ethnic Russians, and they were horrified at last month’s revolution in Ukraine. Russia has cast the interim Ukrainian government as a fascist junta intent on stripping the local Russian communities of their rights. So it is not surprising that many of Crimea’s ethnic Russian residents have welcomed Russia’s military occupation of Crimea as well as the prospect of Russian annexation.

The dissenting voices of Crimea’s ethnic minorities, primarily Ukrainians and Muslim Tatars, have meanwhile not been counted in the referendum, because they have largely boycotted the vote as an illegal act of separatism. “We’ve lived under totalitarians and idiots on this land,” says Akhtem Chiygoz, the leader of the Tatar community in the city of Bakhchisarai, where Tatars make up about a quarter of the population. “But in Ukraine at least we’ve felt free. The struggle for our rights has been open and declarative in Ukraine. Now we will have to continue that struggle under an occupation.” On the day of the referendum, Chiygoz was holed up in his office with a few of his fellow Tatar activists, smoking cigarillos and watching the results come in on the local Tatar television network. If Yurchenko was the winner of the day, Chiygoz was the loser.

And there were many others besides. Archbishop Kliment, the leader of the Ukrainian Orthodox Church in Crimea, had informed his congregants that voting in the referendum would make them accessories to a crime against Ukraine. So most of them stayed away. But that did not make them immune to the transformations overtaking Crimea on Sunday as they knelt before the altar at the morning mass. “It’s like we’ve been caught up in a net that is dragging us down, back into the past,” says Kliment, whose denomination of the Orthodox faith makes up about 10% of Crimea’s 2 million residents. “We grasp that what’s happening around us is illegal, and we grasp that we can’t escape,” he says. “But beyond that, the healthy human mind cannot comprehend this madness.”

Those pockets of dejection were isolated, however, and they were drowned out by the celebrations put on for the ethnic Russians of Crimea. Pop stars flew in from Moscow to serenade the locals from a stage set up in the capital, Simferopol, where columns of cars waving the Russian tricolor drove through the streets honking their horns in jubilation as the results of the ballot came in. “And now I’ll be returning home, at once a saint and a sinner, where the vodka will soothe my ailing voice,” sang the Russian diva Vika Tsyganova, dressed in a gown of bright red silk.

For the tens of thousands of people who came out to listen to her in the central square of Simferopol, the day’s vote did mark a sort of homecoming, as well as a chance to break from the country where they have hardly felt at ease since the collapse of the Soviet Union. “Russia is where we belong,” says Ekaterina Styozhka, 25, who came out to vote in Bakhchysarai, bringing along her 6-year-old daughter Alina. “Right now, for the sake of our children, we have to think about stability first, and that lies with Russia.” The revolution that brought a new government to power last month in Ukraine, she says, will bring in an era of chaos, and the referendum is her and her people’s chance to escape. “All those dreams of joining Europe are no more than fantasies,” she says. “Not with those new leaders. Just look at them.”

In the eyes of most Crimeans, clouded as they have been by Russian propaganda, the new government in Ukraine is dominated by neo-Nazis, and Sunday’s choice was presented to them as one between fascism and Russia. Billboards around Crimea showed the peninsula either draped in the Russian tricolor or stamped with a big, black swastika. That kind of fearmongering, even Yurchenko admits, overstates the threat from the new government in Kiev. “It’s not so much that they’re fascists,” he says. “It’s that they did not respect our rights.”

Days after coming to power last month, the parliament in Kiev passed a bill revoking the rights of Ukraine’s regions from making Russian an official language alongside Ukrainian. For ethnic Russians in Crimea, that felt like an omen of worse persecution to come. “If they hadn’t done that, if they had come to us offering greater autonomy from the beginning, offering respect for the Russians of Crimea, things would not have come to this,” Yurchenko says. And even though Kiev did not take long to realize its mistake — repealing the discriminatory language law and offering greater autonomy to Crimea this month — it was too late.

Russian troops had by then occupied the region. The SBU security service and the regional police force in Crimea had switched sides, pledging allegiance to the peninsula’s new pro-Russian leader, Sergei Aksyonov, who had come to power with the support of armed commandos on Feb. 27. “We are going home!” Aksyonov said from the stage in Simferopol on Sunday night, a few hours after the referendum ended just as he had intended. “Crimea is part of Russia, comrades, hurrah!” And with that, the Russian national anthem began to play over the sea of Russian and Crimean flags. “No one can take our victory away,” Aksyonov shouted into the microphone, and the crowd began to roar in jubilation. 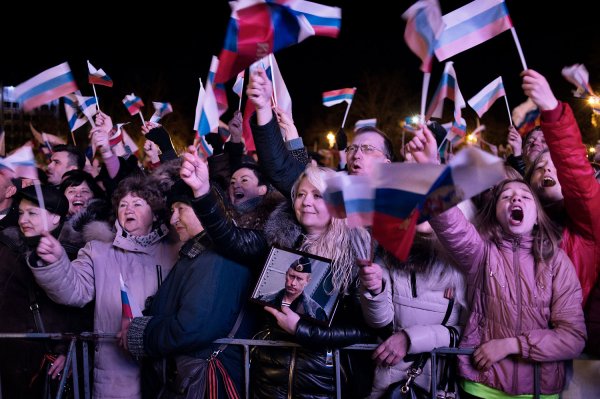 Crimea Wants Out
Next Up: Editor's Pick