From Humble Beginnings to 'Pastor in Chief': How TIME Covered the Evolution of Billy Graham

From his early days as a preacher making news for his large-scale revival events, to his later years as an icon of American faith, Billy Graham — who has died at 99 — made headlines over the course of more than half a century. During those decades, TIME closely covered his ideas and his influence. Follow the arc of his career through the four cover stories below.

“I may be just a small item on the back page of heaven’s newspaper,” says Graham modestly. But on earth he has already got enough newspaper publicity to make both Hollywood and the circus envious. Five full-length movies in which he appears, a weekly radio program, broadcast on nearly 1,000 stations, and a daily newspaper column syndicated in 99 newspapers, keep a steady stream of converts “deciding for Christ” every week. Tycoons listen to him respectfully, and grey-headed clerics sit at his feet. The humble send him gifts, and the great ones seek him out. Churchill invited him to Downing Street, and Eisenhower keeps one of Billy’s red leather Bibles at his bedside. By all indications, that is just the beginning of a career that is making this Baptist from North Carolina one of the greatest religious influences of his time.

Weathering both applause and derision, Graham has through the years become America’s perennial deus ex machina, perpetually in motion, sweeping in to lift up spirits befuddled by modernity. When Presidents need to pray, it is Graham whom they call; he ministered to Dwight Eisenhower in the White House, spent the night with the Bushes on the eve of the Gulf War. Richard Nixon offered him the ambassadorship to Israel at a meeting with Golda Meir. “I said the Mideast would blow up if I went over there,” Graham recalls. “Golda then reached under the table and squeezed my hand. She was greatly relieved.” When Billy arrived for a crusade in Little Rock, Arkansas, in 1989, Hillary Rodham Clinton invited him to lunch. “I don’t eat with beautiful women alone,” Billy told her, so they met in a hotel dining room and talked for a couple of hours.

Between father and son, there are differences in style. If the father is known for the plainness of his preaching–what made him absolutely impossible to ignore was not his turn of phrase or his way with a parable, but his utter, breathtaking conviction–then the son’s style is, if anything, even more unadorned. The older man would pace the stage pantherlike, an outsize Bible often waved aloft in the left hand, his right index finger jabbing forward as if to impale Satan against the horizon. The son stands as though his feet were in cement, his posture as unyielding as his message.

Back in 1955, when Dwight Eisenhower had become Graham’s first real friend in the White House, he used to press the evangelist on how people can really know if they are going to heaven. “I didn’t feel that I could answer his question as well as others could have,” Graham told us. But he got better at it with practice. John F. Kennedy wanted to talk about how the world would end–more than an abstract conversation for the first generation of Presidents who had the ability to make that happen.

Lyndon Johnson was obsessed with his own mortality. “He was always a little bit scared of death,” Graham said, and thus wanted a preacher handy–like the time he talked Graham into flying to a convention with him because the weather was so bad, he thought the plane might crash. Having entered office in the shadow of the Kennedy assassination, Johnson was conscious of how a President’s death can shatter a country…

For more than 20 years, Graham’s good friends George H.W. and Barbara Bush invited him and his wife every summer to Kennebunkport, Maine. They were very grateful when he took a walk on the beach one day in 1985 with their eldest son. George W. Bush said that encounter put him on a path to a new relationship with Jesus and “planted a mustard seed” in his soul. 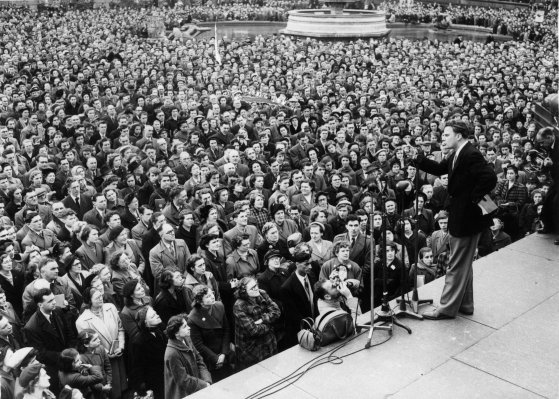 'I Am Selling the Greatest Product in the World.' Inside Billy Graham's Evangelism Machine
Next Up: Editor's Pick