Pacifism Does Not Honor Veterans

What is the best way to remember America’s veterans, OUR veterans, and the wars in which they served?

In his Memorial Day column “The Questions We Don’t Ask on Memorial Day,” Jim Wallis of Sojourners, a prominent liberal religious advocacy group, reflects on the anguish of Americans who have lost loved ones to war. He adds: “I also wonder why nobody raises the questions about why all these sons and daughters, brothers and sisters, dads and moms–all these best of friends–had to die in those wars.” And he asks: “So why can’t we ask if these wars were right or wrong, worth the terrible sacrifices, or what we have learned from the wars? What was gained or lost? Who decided to go to war? And why do their families often bear the least consequences for the war decisions?”

Wallis admits these questions anger some and imply disrespect for veterans. But he insists that “to raise the hard questions of why wars were decided and who decided them is actually a way to respect those who paid such a heavy price and perhaps would prevent more such horrible human costs.” He recalls the Vietnam War as the “war in my youth,” which “was based on lies and was exposed as a political and moral mistake, but went on even after we knew it was wrong and destined for disaster,” and “violated our nation’s best values and religious convictions.”

Iraq was another war “based on lies,” Wallis asserts, and “morally compounded by being a war over oil.” And he describes the Afghanistan War as having been launched to “bring those who attacked us to justice, became the longest war in our history, again without honest answers to what we really have accomplished.” He laments that “war has become such a business in America, whose beneficiaries are not the people we remember on Memorial Day,” and whose “victims,” i.e. those who served in the armed forces, are disproportionately the poor.

What Wallis does not mention is that he is a pacifist who opposes all war. Pacifism has a long, reputable history within Christianity, although it has always been a small minority view. He does not mention veterans from the Korean War or World War II, although he must similarly disapprove of those wars.

But pacifists, especially if they are Christians, in their faithful witness, should not distort history or malign the traditional majority of their faith who affirm the justice of some wars. What was the “lie” behind the Iraq War? Lies are deliberate untruths, but almost no one doubted that Saddam Hussein had deployable chemical weapons. Opponents of that war like Wallis never explained their own alternative to handling the murderous Saddam, nor how the Taliban regime in Afghanistan, as hosts to the al Qaeda, could be displaced peacefully.

As to Vietnam, more died in the subsequent “peace” of Communist conquest in Southeast Asia than during the previous 20 years of war. Many war opponents glamorized those conquerors without acknowledging their murder and repression.

All wars illustrate humanity’s intrinsic sinfulness, for which religion ideally offers redemption and moral uplift. But in our fallen world, with its dictators, aspiring conquerors and terrorists, every lawful government is divinely ordained, as Christians and most people of faith agree, to defend the innocent and to pursue approximate justice, however imperfectly. It’s easy to fire rhetorical darts at wars and the always flawed leaders who lead our nation into them. For those with real responsibility, it’s much more complicated to pursue the best policies that will ensure security for our nation and an at least incrementally more just world.

The wars in Iraq, Afghanistan, the Persian Gulf, Vietnam, Korea, World War II and others across history had noble intent and, like all wars, had their share of tragic consequences. Even “good” wars are filled with suffering by the innocent. Wars are morally justified only when the alternatives are even worse.

Veterans in America’s wars, whether the volunteers of the last 40 years, or the draftees of earlier decades, were not “victims.” They were and are Americans who sacrificially served their country. They should be honored, not romanticized, nor condescended to.

Wallis suggests Memorial Day as a time for asking “hard questions about our wars, what we have learned, and whether such painful losses are truly worth the terrible cost.” Perhaps those questions should also include asking what the world might look like absent the service of America’s veterans and the willingness of America to resist aggression and tyranny.

Mark Tooley is president of the Institute on Religion and Democracy in Washington, D.C. He is author of Methodism and Politics in the 20th Century.

Write to Mark Tooley at MTooley@theird.org. 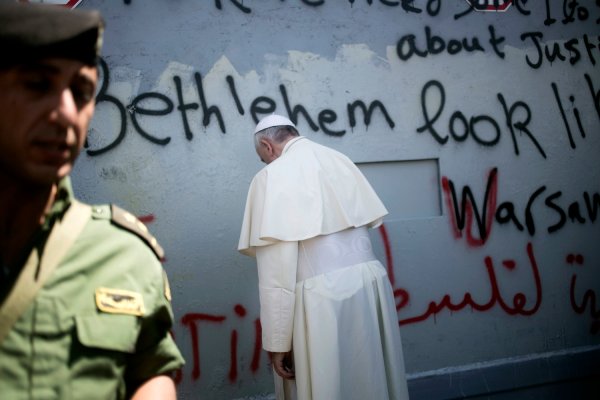 Pope Francis' Middle East Travels Are Being Overhyped
Next Up: Editor's Pick