Toward the end of 2011, America’s brewers were all but forced to pay attention to the rising hard cider market. For the 12-month period ending in October 2011, cider sales were up 25%. Sounds pretty good, but at that point cider hadn’t even come close to hitting its stride.

Citing data from the market research firm IRI, the St. Louis Post-Dispatch noted last spring that for the “52-week period ending April 21, sales of the 10 largest cider brands in the U.S. surged 101 percent compared to a year ago, growing to $127.8 million.” A more recent story at AdAge showed that the segment’s growth has continued to soar, with cider sales growing nearly 100% for the 52-week period ending on January 26, reaching $220.7 million total.

Understandably, the world’s biggest brewers are jumping on the cider trend, if for no other reason than out of fear of losing sales to the competition. The articles mentioned above focused on how Anheuser-Busch InBev and MillerCoors, respectively, are adding new cider brands and ramping up marketing efforts to win over potential customers. Meanwhile, the Boston Globe reported last fall that the fastest-growing brand owned by the Boston Beer Company, maker of Samuel Adams, isn’t a beer but a cider: Angry Orchard.

At this point, cider constitutes just 1% of the beer market. But given the way it’s been embraced by consumers, and given how big of a push there is behind cider among big brewers and mom-and-pop outfits alike, cider won’t be stuck at the 1% mark for long. “I could see it growing to 2 or 3 percent market share in a few years,” Harry Schuhmacher, editor and publisher of Beer Business Daily, told the Post-Dispatch. “The category is growing at over 100 percent a year, and when you have a doubling every year, it gets everyone’s attention.”

At the same time, Anheuser-Busch has been having great success with its “Ritas.” Starting with Bud Light Lime in the late ’00s, the brewer has rolled out a series of sweet, fruity, vaguely margarita-ish, vaguely beer-like beverages. The company just announced that in addition to its “two most successful innovations to-date,” Lime-A-Rita and Straw-Ber-Rita, two more fruity concoctions are hitting the market permanently, laced with the flavors of mango (Mang-O-Rita) and raspberry (Raz-Ber-Rita).

What must be especially interesting concerning to Big Beer about these alternabrews is that they don’t necessarily cannibalize sales of their bread and butter, beer. Sales of cider and the “Ritas” are generally split 50-50 among men and women, and research indicates that the folks who go for these beverages tend to be more into wine and spirits than beer. So all of the classic beer brands suffering from massive declines in popularity can’t really blame their downfall on the spread of cider and other sweet non-beers.

At the same time these products are beloved by brewers because they reach beyond the core beer market—in particular, they’re embraced by women—some are worried the beverages are too unisex, perhaps even “girly.”

Some of the marketing is clearly aimed at telling guys that they’re not sissies when they drink cider. Hence, the Boston Beer Company’s Angry Orchard. That’s not a brand name that anyone would say has women in mind.

Likewise, MillerCoors has been going over the top with its masculine marketing for Smith & Forge Hard Cider. It comes in a tall black can, with a large bold orange-rust slogan that’s the opposite of weak, and also sorta dumb. “MADE STRONG,” the label reads. “IN THE TRADITION OF MAKING THINGS STRONG.”

Forthcoming ads for Smith & Forge will feature men doing old-fashioned manly things, like boulder-splitting and blacksmithing. All in all, the message is that dudes shouldn’t be embarrassed to order a cider, or at least this particular brand of tough “masculine” cider. Rita Patel, marketing director of innovation for MillerCoors, explained to the Denver Business Journal, “Guys right now are looking for something that gives him this flavor profile but also is for him … something that’s not as sweet and that he also feels comfortable holding.” 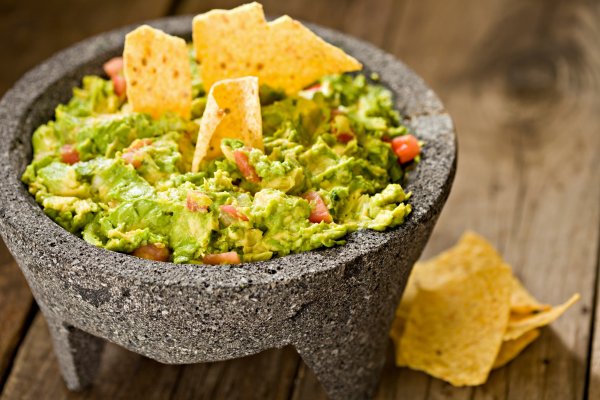 Chipotle Warns of Climate Change Guacpocalypse
Next Up: Editor's Pick