Bananas are increasingly popular around the world, but they're vulnerable to a new disease
Ronaldo Schemidt—AFP/Getty Images
By Bryan Walsh

All it takes is a trip to the closest Whole Foods to discover how much more varied the offerings of an American grocery store have become in recent years. Organic asparagus from Mexico, papaya from Hawaii, dry scallops from Nantucket Bay—the foodstuffs available to American consumers have never been more diverse. And on a country by country basis, that diversity is growing around the world, as people take advantage of economic growth and urbanization to move away from basic staples like rice and beans, adding meat and dairy and processed foods, while liberalized trade rules have allowed the spread of global food brands. Whether you’re in New York or Nairobi or Nagoya, chances are you have access to a greater variety of food than your parents or your grandparents once did.

But even as the offerings in each individual country become more diverse, the global diet as a whole—what people actually buy and eat—is becoming more homogenized, and that’s a dangerous thing. Those are the conclusions of a new paper published in the Proceedings of the National Academy of Sciences. Researchers from around the world went through 50 years of data gathered by the U.N.’s Food and Agriculture Organization to identify trends in the global menu. They found that human diets have grown increasingly similar—by a global average of around 36%—as a few staple crops like wheat and maize (corn) and soybeans come to play a bigger and bigger part of mealtime, displacing regional crops like cassava and sorghum.

“More people are consuming more calories, protein and fat, and they rely increasingly on a short list of major food crops, like wheat, maize and soybean, along with meat and dairy products, for most of their food,” said Colin Khoury, a scientist at the Colombia-based International Center for Tropical Agriculture (CIAT) and the lead author of the paper, in a statement. “These foods are critical for combating world hunger, but relying on a global diet of such limited diversity obligates us to bolster the nutritional quality of the major crops, as consumption of other nutritious grains and vegetables declines.

(MORE: Whole Food Blues: Why Organic Agriculture May Not Be So Sustainable)

The conclusion shouldn’t be surprising to any world traveler who has noticed that you can get Mexican in Malaysia, sushi in South Africa and McDonalds just about everywhere. On a country by country basis, that can mean more choice and variety—Americans would never have eaten sushi 100 years ago and Japanese weren’t chowing down on hamburgers. But on a global level is all evens out, as the diets of individual countries become more and more similar.

While cheaper wheat and soybeans—much of which is consumed in processed food or in meat by grain-fed animals—has introduced new foods to billions of poor people who used to be dependent on a very limited diet, there are obvious drawbacks. The Westernized diet that’s sweeping the world has contributed to the rise in global obesity, which has nearly doubled since 1980, and the resulting spread of metabolic diseases like diabetes. The carbon footprint of crops like maize and wheat, and especially meat and dairy, is often bigger than that of the foodstuffs they’re displacing, amplifying agriculture’s role in climate change. And just as the homogenization of global culture through Hollywood mega-blockbusters and the spread of English has led to the crowding out of regional identity and language, the homogenization of the global diet could result in the loss of unique crops and obscure delicacies.

But the bigger problem is that a global diet that overwhelmingly depends on just a few staple crops is extremely vulnerable to any new diseases, pests or climatic changes that could threaten those plants. Just look at the banana, which has become the world’s most valuable fruit, with exports that reached 16.5 million metric tons in 2012. Americans alone eat more bananas than apples and oranges put together. But a pair of diseases are ravaging existing banana crops. Black Sigatoka, a disease that blackens bananas and can cut yields in half, is showing resistance to the fungicide that has long been used to control it. Worse, Foc Tropical Race 4, a disease that attacks the ubiquitous Cavendish banana variety, is spreading through Asia and is now threatening Latin America, which produces 70% of the world’s $8.9 billion banana export crop.

The reason Cavendish bananas now make up 99% of the bananas eaten in the developed world is because they could survive an earlier version of the plant disease called Race 1. Over the first half of the 20th century, that pathogen drove what had been the world’s only export banana—the Gros Michel—to virtual extinction. (The losses caused by Race 1 were so great that they inspired the 1922 song “Yes, We Have No Bananas,” which as Homer Simpson once noted, is just so sad.) As Gwynn Guilford writes in Quartz, the damage to the global banana industry could be even worse if “banana HIV,” as some have called Race 4, spreads globally:

That’s true for too many of the increasingly narrow number of crops that the world depends on today. A homogenized global diet isn’t just unhealthy and boring; like a stock portfolio with just a few holdings, it’s very, very vulnerable to any kind of disaster. 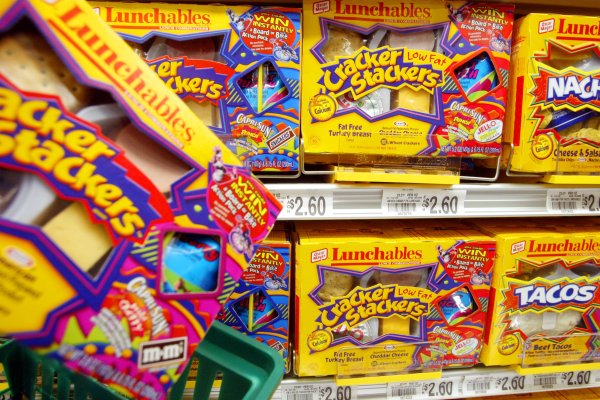 Oscar Mayer Is Now Selling Lunchables for Adults
Next Up: Editor's Pick