5 Things You Need to Know About Gluten

Unless you’ve been on a media-free diet, you probably saw Jimmy Kimmel Live’s hilarious “What is Gluten?” video, in which none of the gluten avoiders interviewed could explain exactly what gluten is. The truth is, most of my gluten-free clients don’t really know what it is either, but they do know that they feel better when they avoid it.

But there’s a problem: I noticed that some of the things people said in Kimmel’s video, like where they think gluten is found, were just plain incorrect. The video has more than 2 million views, so I thought it would be helpful to provide a primer. Here are five things you should know before starting a gluten-free diet, in order to reap the benefits and avoid the pitfalls.

Gluten is a protein

Yup, gluten is a type of protein naturally found in wheat (including spelt, kamut, farro, and bulgur) and other grains, like barley and rye. But gluten also lurks in many products, like salad dressings, seasoning mixes, vitamins, and even lip balm, so eliminating it completely is a big commitment. I’ve met many people who say they are gluten-free, but in reality they’ve just eliminated wheat-based foods like bread, pasta, and bagels, because they think wheat is the only source. If you truly need to banish gluten altogether, you need to become a gluten sleuth.

Gluten isn’t in every type of grain

I’ve heard many people say that gluten is found in grains period, but that’s not the case. There are several grains that are naturally gluten-free, including rice, corn and popcorn, quinoa, amaranth, buckwheat, millet, sorghum, teff, and oats (as long as they haven’t been contaminated with wheat during processing). In other words, gluten-free and grain-free aren’t synonymous, and I don’t recommend the latter. Gluten-free whole grains are chock full of vitamins, minerals, antioxidants, and fiber, and as long as you don’t overdo it portion-wise, including them in your diet can help you lose weight, and protect your health. Unfortunately the gluten-free craze has given all grains a bit of a black eye, but refined white pasta and quinoa aren’t even close to being in the same category from a nutrition perspective.

Health.com: 6 ‘Bad’ Carbs That Are Actually Good for You

Gluten-free foods can be processed, too

Some people are under the assumption that all processed foods contain gluten and no gluten-free foods are refined or processed, but that’s not accurate. Because gluten-free has exploded in popularity, there are more gluten-free products than ever, and many are highly processed, or made with refined versions of gluten-free grains, such as white rice. For the best nutritional bang for your buck, look beyond the words “gluten-free” on a package and read the ingredient list—it should read like a recipe you could recreate in your own kitchen. And if grains are included (some gluten-free products are made with other starches, like potatoes or beans), they should be whole, which means they haven’t been stripped of their fiber and nutrients.

Avoiding gluten may help you feel better, even if you don’t have Celiac disease

People who have Celiac disease must completely eliminate gluten, because consuming even small amounts triggers symptoms, including belly pain and bloating. This happens because in people with Celiac, gluten causes the immune system to damage or destroy villi, the tiny, finger-like outgrowths that line the small intestine like a microscopic plush carpet. Healthy villi absorb nutrients through the intestinal wall into the bloodstream, so when they become damaged, chronic malnutrition occurs, which is typically accompanied by weight loss and exhaustion. In people with this diagnosis, avoiding gluten is the only way to reverse the damage.

However, people who test negative for Celiac may also benefit from going gluten-free if they’re experiencing a condition called gluten intolerance, or gluten sensitivity. While it’s not the same as Celiac disease, consuming gluten can cause bothersome side effects in many people, including flu-like feelings, bloating and other gastrointestinal problems, mental fogginess, and fatigue. Unfortunately at this time, there is no widely accepted test for gluten sensitivity, and the symptoms may be related to other issues, including stress, so it’s not black and white. If you think you may have a gluten sensitivity, avoid gluten and monitor how you feel.

A lot of people who go gluten-free focus on getting rid of foods, but to balance your diet and ensure that you’re taking in a broad spectrum of nutrients, it’s also important to emphasize what you do eat. As I noted, there are several nutrient-packed whole grains that are naturally gluten-free. So if your old standby side dish was pasta, replace it with something like whole grain rice (brown, red, black, or wild), quinoa, or roasted organic corn.

Fresh veggies and fruits, beans, lentils, and nuts are also gluten-free, so if you used to nibble on crackers, pretzels, or cookies, trade them for wholesome snacks, like veggies with hummus, berries with nuts, or roasted chickpeas. One of the key benefits of adopting a gluten-free diet is that it’s an opportunity to reinvent the way you eat. Take it on it by seeking out superfoods, so in addition to getting rid of gluten, you’ll also be embracing a wide variety of nutrients that will help you look and feel your best. 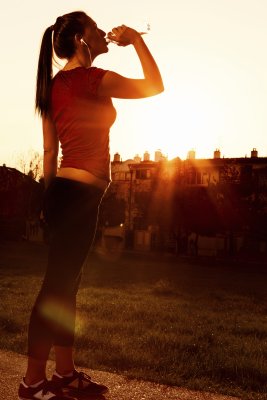 14 Surprising Causes of Dehydration
Next Up: Editor's Pick