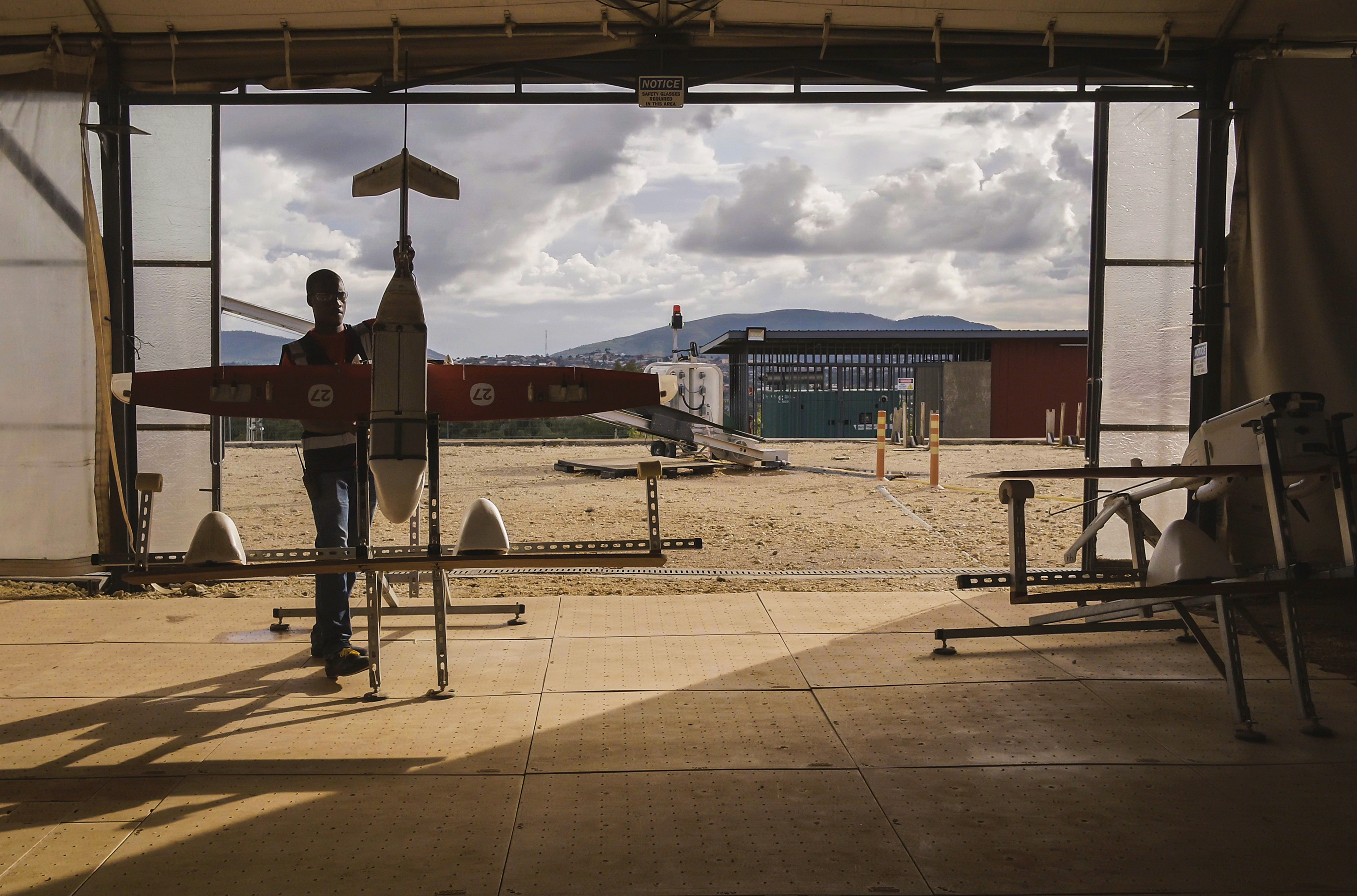 Zipline technicians prepare the Zipline drone for launch at the company's headquarters in Muhanga, Rwanda.
Johnny Miller for TIME

U.S. startup Zipline has teamed up with the Rwandan government to deliver blood supplies by drone
By Aryn Baker | Photographs by Esther Mbabazi for TIME

For several days, Delphine Twese Hamwe’s 2-year-old daughter Ghislane had been screeching in pain as fever wracked her tiny body. A nurse at the local clinic in central Rwanda told her that an acute form of malaria was attacking her daughter’s red blood cells. There was nothing the clinic could do to save her life, so they called an ambulance. But by the time mother and child arrived at the district hospital in Kabgayi, Ghislane had stopped moving. “We arrived too late,” Hamwe says. “There was no sign of life. I thought she was dead.” The nurses offered a blood transfusion as a last resort. Hamwe, numb and distracted, agreed. She was already on her phone, messaging the bad news to family back in the village.

Meanwhile, a technician at the hospital laboratory was typing out his own message, a request for two units of pediatric red blood cells, O+. Normally, he would have dispatched a car and driver to the central blood bank in the capital, Kigali, a three-hour round-trip. But the urgency of the case forced him to try something new. His phone flashed a confirmation message: the blood was on its way, with an estimated delivery time of just six minutes.

Before long the high-pitched whine of a drone could be heard circling the hospital grounds. As it passed over the lab’s parking lot, it released a red cardboard box attached to a paper parachute. Inside the box were two packets of blood, wrapped in insulating paper and still chilled from refrigeration.

Donata Mubandakazi with her 10 year-old son Jean following surgery for an unidentified infection on his leg. He was given plasma from a Zipline drone.
Esther Mbabazi for TIME

A nurse rushed the blood over to the emergency wing, and within minutes it was pumped into Ghislane’s limp body through an IV. The child opened her eyes. It was Dec. 21, 2016, and she had just become the first person in the world who owed her life to a drone delivery.

In March 2016, Zipline, a U.S. startup, partnered with the Rwandan government to launch the world’s first commercial drone delivery service, ferrying vital medical supplies to far-flung hospitals by air. Since October of that year, the company has dispatched more than 7,000 units of blood products to 21 hospitals, including red blood cells, platelets and plasma that would have otherwise needed to travel by a treacherously tangled road network, losing precious hours in the race to save lives.

“Before, it took at least three hours to get blood in an emergency,” says Dr. Roger Nyonzima, head surgeon at Nyanza Hospital’s maternity ward, which is about 60 miles from Kigali. “Three hours can make the difference between saving or losing a life. Now we get blood in 15 minutes. Fifteen minutes, we can work with.”

The success of Zipline in Rwanda has inspired the company to grow. Zipline is now expanding into neighboring Tanzania, with plans to launch the world’s most extensive drone delivery service providing blood-transfusion supplies, emergency vaccines, HIV medications, anti-malarials and basic surgical supplies to more than 1,000 health facilities.

The delivered blood from Zipline in Kabgayi Hospital laboratory on July 21, 2017.
Esther Mbabazi for TIME

A Latin America launch is in the works as well, says Zipline co-founder Keller Rinaudo. “The reality is, moms die in every country in the world for [lack of blood],” he says. “Rwanda was just the first country to do something about it.”

Zipline is not alone in the medical-supplies-by-drone sector. Swiss Post, in conjunction with Matternet, a Silicon Valley–based tech company,

is developing a similar program to ferry blood samples and biopsies between hospitals in dense urban areas, and plans to be fully operational in Swiss cities this year. But Matternet’s small quad-copters can cover only short distances. Several other startups are exploring drone delivery of blood samples for disease tests, defibrillators and even condoms in the U.S. and around the world.

The inspiration to form Zipline came from a list of lives lost in rural parts of Africa due to a shortage of essential medicines. Robotics expert Rinaudo and aviation consultant Will Hetzler, former roommates at Harvard, met a computer programmer and public-health researcher, Zacharia Mtema, in Tanzania. Mtema had developed a text-messaging system for doctors to log cases in which they had lacked the medical supplies that were needed to save the lives of patients who were suffering from easily solvable afflictions like postpartum hemorrhages, snake bites and bites from rabid animals.

“It was essentially a database of death,” says Rinaudo, who recalls scrolling through thousands of heartbreaking entries. To him and Hetzler, drone deliveries seemed like an obvious solution.

A portrait of Franciose Mukeshimana with her eight month old baby Bertrand in front of their home in Muhanga on July 21, 2017. She was the first mother to receive blood from Zipline at Kabgayi Hospital in Muhanga district.
Esther Mbabazi for TIME

On any given day, scores of drones launch and land at Zipline’s Rwanda headquarters, a former cornfield in the city of Muhanga, about an hour’s drive from Kigali. The steady rhythm of packing, launching, collecting and charging the drones belies the groundbreaking technological advances in robotics, autonomous navigation and aerospace management that underpin the business. That’s the way the founders want it. “Zipline isn’t a drone company,” says Rinaudo. “Zipline is a health care logistics company.”

The design of their electric aircraft, called Zips, diverges wildly from the quad-copters that are currently being used by most drone companies. Instead, they look like small propeller airplanes, enabling them to fly faster and longer—100 miles—on a single charge, in any weather short of a hurricane. The Zips navigate to their pre-programmed destinations using GPS and drop their payloads via parachute, instead of landing, to minimize the number of people who need to be trained on how to interact with a drone. All the hospitals need is someone who can send an order and pick up the box when it lands.

Claudine Ndashimye, 26, with her baby Rabertin. She received blood from Zipline after having complications with her pregnancy.
Esther Mbabazi for TIME

Once an order arrives in Zipline’s computer database, blood-bank technicians pull the required stock from state-of-the-art blood-storage facilities and pack it into sturdy cardboard boxes that are already fitted with parachutes. The drones can carry up to 3.9 lb. of blood products at a time. Drone operators load the boxes into Zips, which can reach more than half of all Rwandan territory. A second facility that will cover the rest of the country is under construction.

The operator loads the Zip onto a catapult-type launch mechanism and enters the destination on a tablet, and with a high-pitched whine, the Zip is airborne. The whole process takes about a minute from order to launch. Once the Zip nears its destination, it sends an automated text message to the hospital, announcing the exact arrival time. Then it swoops down toward the designated landing zone, drops its payload and circles back toward home base.

Blood and medical-supply shortages affect rural hospitals in the U.S. just as they do in Rwanda, and Zipline, after an invitation from the White House in 2016, is now working with the U.S. Federal Aviation Administration to launch a similar service in parts of the U.S. later this year.

Aryn Baker’s reporting for this story was supported by Merck for Mothers.