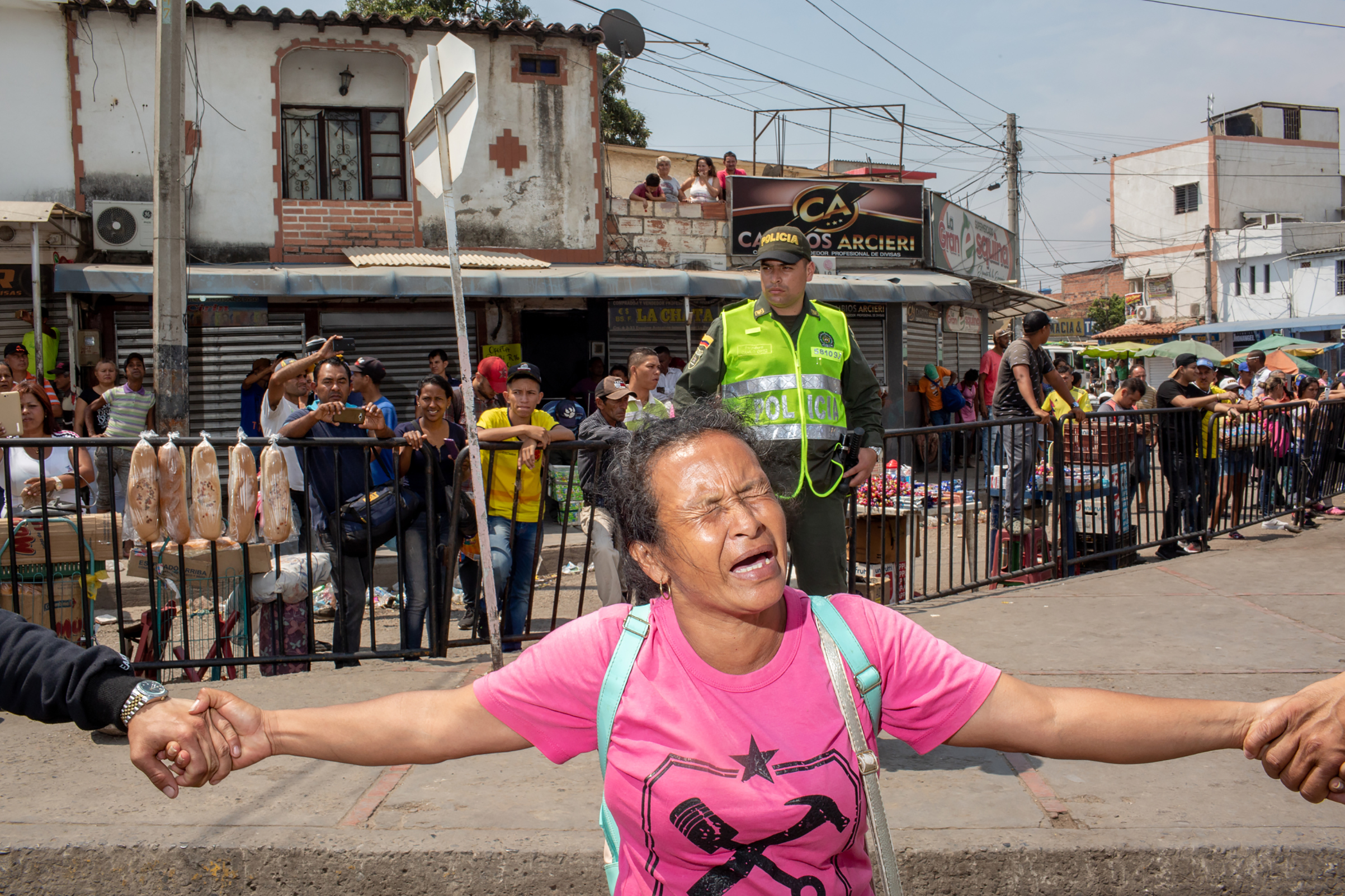 Volunteers make a human chain to prepare for the arrival of aid at the foot of the Simón Bolívar International Bridge near Cúcuta, Colombia, on Feb. 23, 2019.
Photograph by TIME

It started with smiling faces waving white roses and strangers linking arms with one another on Saturday. Then, thousands of supporters of Juan Guaidó, Venezuela’s self-proclaimed interim president, climbed aboard flatbeds loaded with bags of rice, bandages and wheelchairs for their compatriots in need. Others swarmed the cabs. The engines started. With blazing sunlight beating down on them, they headed for the border.

This is the scene of the Venezuelan opposition’s challenge to strongman, and current President, Nicolas Maduro’s legitimacy. In a sticky, humid valley speckled with palm trees and dusty yellow roads, thousands of Venezuelans prepared to join caravans hauling tons of aid destined for their counterparts on the other side of the Venezuela-Colombia border.

“The idea is to talk to them first,” said 33-year-old Elio Herrera from the Tienditas bridge outside of Cúcuta, Colombia, home to the opposition’s main headquarters and where the aid was stored in warehouses. The Tienditas bridge is one of the bridges where the opposition hoped to ferry aid, but didn’t try because of the blockade. “We hope they won’t impede. The military over there is suffering just as much as all of Venezuela. If they do block us, then they’re basically complicit in a murder.”

The chance to talk seems to have passed. After arriving at the border crossings, this U.S.-backed effort to deliver tons of aid to relieve Venezuelans reeling from a political and economic crisis quickly devolved into violent clashes along the outskirts of Cúcuta, on Venezuela’s western border. At least 86 people were reported injured, according to Colombia’s National Disaster Unit. Two others were reported dead in a separate clash on the Venezuela-Brazil border.

At the border, aid caravans pressed through crowds along narrow two-lane bridges. But their momentum was halted when the Venezuelan army blocked the pass and fired canisters of tear gas into the trucks’ path. Protesters gathered and swarmed, clogging the crossings.

Atop one of the flatbeds, 29-year-old Neyerson Cisneros from Caracas insisted he would wait out the regime’s resistance for as long as it takes to get the aid in. “Depends,” he told TIME. “Four? Five? Six days? We’ll stay here until the aid gets in.”

“We’re tired of this Maduro staying in power,” said 27-year-old Yesica, an aid activist from Barquisimeto, as her fellow marcher piled rocks into the remains of a beat-up suitcase. He then dragged his load toward the center of Simon Bolivar bridge, another site of an attempted aid crossing, where others slung bricks and buried their faces in rags to fend off tear gas canisters returned by Venezuelan security forces.

Relentlessly the activists fought as the aid sat under canvas tarps and shouting buried the idling truck engines.

“We don’t want any more dictatorship,” said 35-year-old William Leal from Tachira state in Venezuela. “We don’t have anything. We’re dying from hunger.”

“They blocked us off,” 24-year-old Yondri from Caracas said about the aid impasse as he squinted through a homemade blue balaclava. “But we’ll keep fighting. We’re not going to give up that easily.”

Guaidó said on Saturday: “We’re not going to rest. We’re keeping all our cards on the table.”

Both sides seemed to dig in for what could be a prolonged confrontation. And yet fighting was never the plan.

Opposition leader Guaidó broke a travel ban Friday evening and crossed into Colombia. There, he joined Colombian President Iván Duque and Chilean President Sebastian Piñera to rally anti-Maduro supporters, in what he hoped would be a peaceful delivery of aid to opposition members on the other side of the border. He called for the military backing Maduro to rebel against the installed President’s orders, something he and other opposition leaders have appealed for in recent weeks.

“It’s clearly a loyalty test where the opposition, with the help of the United States, is throwing everything they’ve got, hoping Maduro will fall,” says Geoff Ramsey, assistant director of the Venezuela program at the Washington Office of Latin America.

Guaidó’s hope was that Venezuelan security forces guarding the border checkpoints would defect en masse once the aid trucks arrived at the border. Although some military figures did defect on Saturday, the strategy of triggering widespread defections seems to have been stymied.

“Their thrust is to turn more military figures. But the military who are truly positioned to remove Maduro seem to be staying with him,” added Ramsey.

Over 3 million have fled their homes since 2014 to escape Maduro’s Venezuela, where the right to dissent is illegal and its economy is plagued by obscene hyperinflation. A minimum wage monthly salary fails to buy even a bottle of breastmilk formula.

Elected in 2013, Maduro insists the crisis is manufactured, economic warfare authored by the United States. He points to U.S. sanctions on his loyalists and the state oil company as evidence.

Meanwhile, opposition leaders point to a slow disintegration of democratic institutions starting with Hugo Chávez, Maduro’s charismatic predecessor. Chávez was elected to office in 1998 and promoted a socialist project he hoped would spread throughout the continent. Although extreme poverty and infant mortality fell during his term, Chávez’s unbridled spending on social programs and mismanagement of the country’s currency set the stage for instability. In 2014, one year after Chávez’s death, Venezuela’s oil-based economy collapsed when the price of crude oil bottomed out.

That collapse is what Guaidó is trying to leverage against Maduro. In January, as the leader of Venezuela’s parliament, Guaidó invoked authority embedded in the country’s constitution and declared himself interim President. His touted goal is to lead a transition where Maduro would step down from power and hold free and fair elections.

Saturday’s clashes were reminiscent of earlier protests between anti-Maduro opposition and pro-government Chavistas. In 2017, clashes left 165 dead and the affair deepened hostilities on both sides, when neither would accept responsibility for the deaths.

Earlier this week, President Donald Trump declared the “twilight of socialism” and urged Venezuelan military to abandon Maduro or “lose everything.” Maduro fired rebukes that the aid operation is a “show” and calls the caravans a trojan horse loaded with “contaminated” food. More, he defended his belief that Guaidó’s support for the aid is part of a U.S. conspiracy to invade Venezuela.

Trump and his advisors have hinted that a military option is on the table. “The problem is that (military involvement) could very easily lead to conflict,” says Ramsey.

“People like to point to Panamá or Granada,” he says, referring to swift and short-lived U.S. military interventions in the Western hemisphere. “But this could turn into Libya or Iraq.”

A clash on Saturday between pro-opposition aid backers and the Venezuelan National Guard on Ureña bridge, north of Cúcuta caused aid to burn. Black smoke billowed into the blue sky. The number of injured rose from the confrontations and opposition leaders called their aid trucks back to the warehouses. International humanitarian organizations, including the UN’s Humanitarian Office and OXFAM, called on aid to remain independent and warned actors in all parties of the dangers of politicizing the aid effort.

Some pro-opposition marchers want to get more political. They think military intervention is the way to go.

“We feel like France in the second World War when they were waiting for the Allies to come,” said Carlos Molina Tamayo, a former Venezuelan admiral living in exile after participating in a failed attempt to remove Chavez from power in 2002.

TIME asked the former admiral what would happen if the aid doesn’t get allowed in.

“The next step is international intervention with military force to protect the humanitarian aid,” he says, his graying hair waving in the strong breeze on Tienditas bridge this afternoon.

The original version of this story misstated the position of humanitarian groups like the UN Humanitarian Affairs Office and Oxfam. The groups called on aid to remain independent and warned against politicizing aid; they did not condemn Venezuelan opposition leaders for politicizing aid. The original version of this story also misstated the UN agency that called for aid to remain independent. It is the UN Humanitarian Affairs Office, not the UN High Commissioner for Refugees.