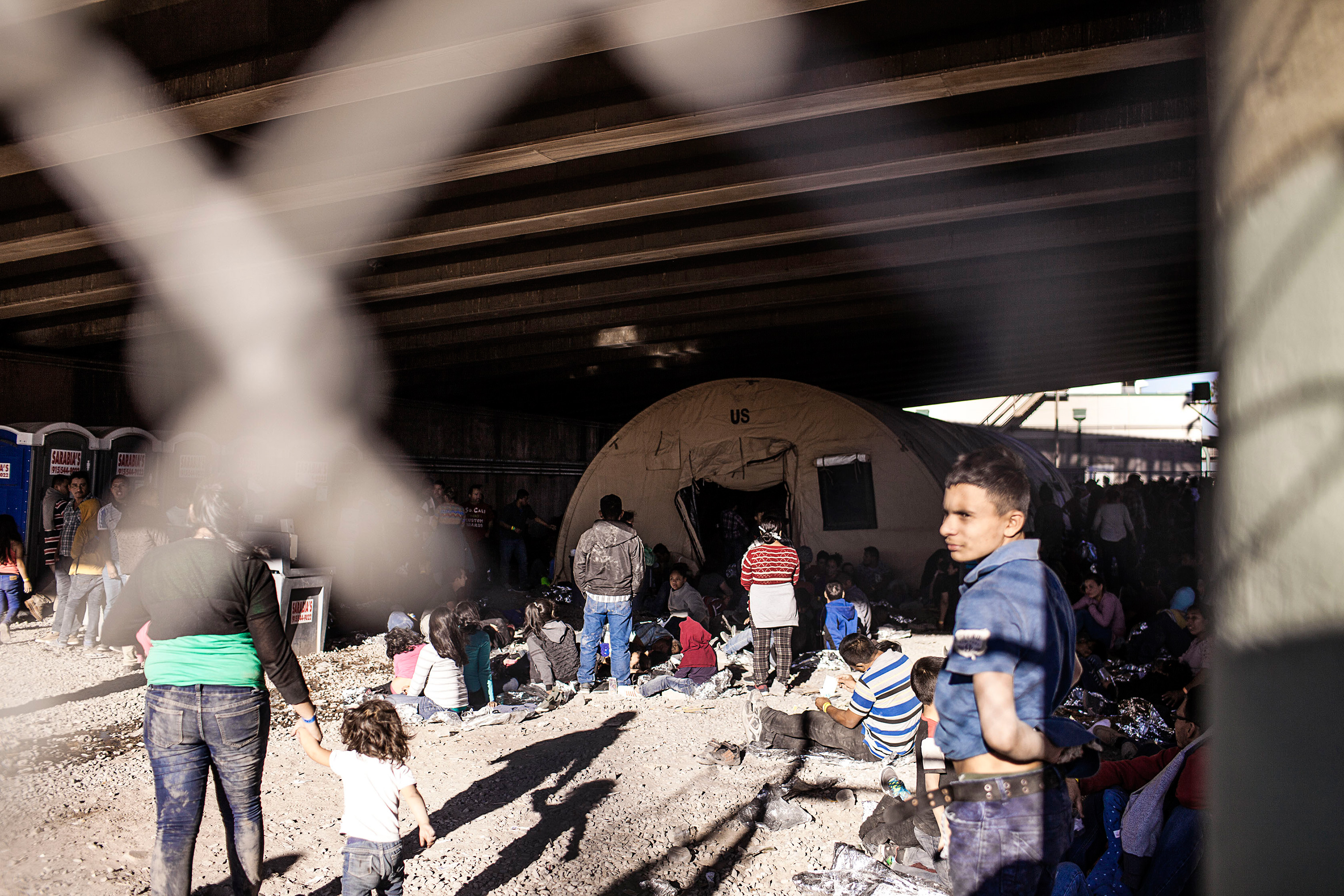 Faced with an unusually high number of incoming migrants, 65% of whom are families with children, the Department of Homeland Security has begun holding those seeking asylum in makeshift detention centers while they await processing.

In El Paso, Texas, one of those detention centers has been installed under the Paso Del Norte Bridge, which spans over the Rio Grande. The images below show that an unknown number of migrants, including families with children, are being held in an outside area surrounded by barbed wire.

The Department of Homeland Security says that El Paso is at the heart of a growing crisis at the border. More than 13,400 migrants were in custody in El Paso on Wednesday, the highest number since 2008, according to Andrew Meehan, the assistant commissioner for public affairs for U.S. Customs and Border Protection.

Meehan said that U.S. Customs and Border Protection is looking to get a “more permanent central processing facility” in El Paso.

Department of Homeland Security Secretary Kirstjen Nielsen said Friday in a statement that the U.S. should reverse policies which enable migrants to stay in the U.S. indefinitely, which she argues incentivize migrants to come to the U.S.

Migrants held in temporary fencing underneath the Paso Del Norte Bridge await processing in El Paso, Texas, on March 28, 2019. U.S. Customs and Border Protection has temporarily closed all highway checkpoints along the 268-mile stretch of border in the El Paso sector to try to stem a surge in illegal entry.
Jared Moossy for TIME

“Our border stations were not designed to hold young people for extended periods, yet this influx has forced thousands of them into facilities that are getting crowded and overwhelmed,” said Nielsen. “This goes well beyond politics. We must come together to find a way to tackle the crisis and reduce the flows so children are not put at risk.”

Fernando García, the executive director of the nonprofit Border Network for Human Rights, said that the U.S. should instead prioritize speeding up the asylum process.

García says that his organization is located near the bridge, and that members of his group have repeatedly checked in on the migrants. He said that he believes that Customs and Border Patrol has been using the camp for several weeks.

“That is not the way to keep refugees, immigrants — much less families,” García says. He said that he was troubled to see that the area was lined with barbed wire, and that migrants were apparently sleeping in tents.

U.S. Customs and Border Protection Commissioner Kevin K. McAleenan, with the bollard border fence in the background, held a press conference in El Paso, Texas, on Mar. 27, 2019. McAleenan said the border has hit its "breaking point" due to flood of migrants in what he described as "a system that is broken and overwhelmed.
Mark Lambie—El Paso Times/USA Today/Sipa
Migrants are being held beneath the Paso del Norte International Bridge in El Paso, Texas, on March 27, 2019, as the U.S. Customs and Border Protection has run out of space to process the asylum seekers.
Mark Lambie—El Paso Times/USA Today/Sipa

García said that while the numbers of migrants have increased recently, particularly in the El Paso area, the number of migrants doesn’t compare to the influx in the early 2000s, when more than a million migrants were detained at the border annually.