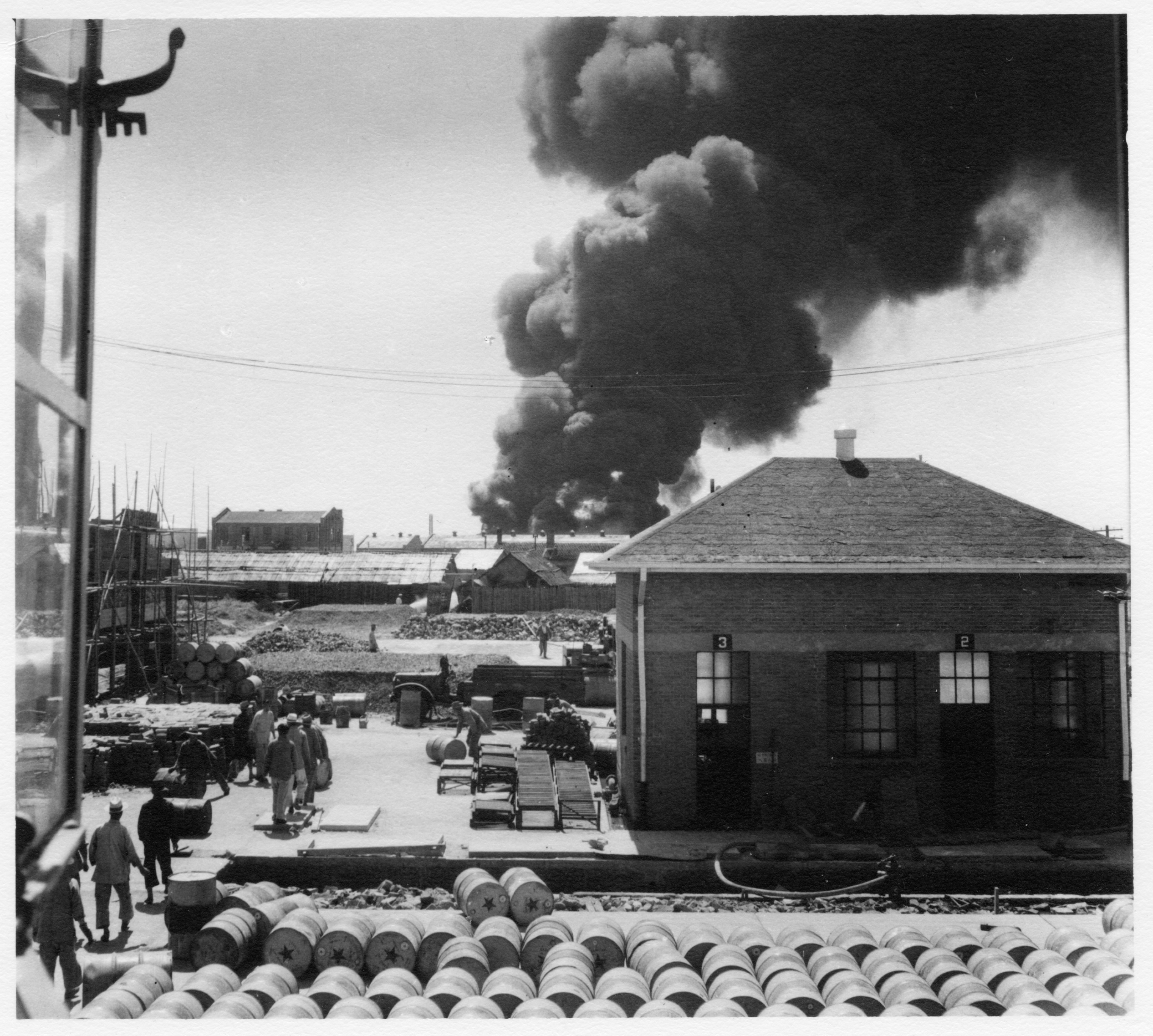 'Sitting on Top of Liquid Dynamite.' Inside a Long-Lost Eyewitness Account of the Communist Takeover of Shanghai

It took three days for Carolyn Davidson Hill to get a chance to record what she had seen on the night of May 25, 1949, and in the wee hours of the next morning. “Now, at last, I get down to writing up that last, incredible 14 hours,” she told her diary then, recalling the decisive final battle between the Nationalist and Communist armies in their two-decade-old civil war for control of China.

Seventy years ago, Shanghai was, as it is today, China’s largest and most dynamic city, the economic engine driving much of the country’s growth and global power. It was also at the center of a war. As the People’s Liberation Army of the Chinese Communist Party advanced, the Nationalists, or Kuomintang party government, vowed to hold onto Shanghai at all costs.

With a brutal battle in the offing, most Westerners who lived there at the time packed up their things and left. Yet Hill and her husband Horace — or Hod, as she called him — hung on. The two, both 37, had married just six months earlier. Around that time, Hod took over as superintendent of Caltex, one of the largest oil terminals in China and a subsidiary of Texaco (today part of Chevron). Carolyn and Hod moved into a large, brick English-style house on the Caltex campus, about 15 miles by boat from central Shanghai, overlooked by Caltex’s hulking oil tanks, stacked barrels of airplane fuel and gasoline, and grimy brick factories and warehouses.

Nationalist troops disembark from a transport at the Caltex pier on the Huangpu River and march just beyond the Caltex fence toward the front.
Carolyn Davidson Hill

To protect the city’s river approaches, as Communist forces moved to encircle Shanghai in April of 1949, Kuomintang forces set up their regional battlefield headquarters next door to Caltex at China Petroleum Company’s terminal, putting the Hills squarely at the front lines.

Carolyn had seen plenty of war, but realized that this was “probably the tightest spot yet….”

Her 75-page diary and snapshots, excerpted here for the first time, provide one of very few Western on-the-spot accounts of those final days when the fate of China—and the destiny of Asia and the world—hung in the balance.

As Nationalist soldiers mustered that spring at the China Petroleum terminal, Hod made a futile effort to persuade them that a stretch of riverbank “occupied by three oil terminals [Shell Oil Company’s Standard-Vacuum terminal closer to the Yangtze was the other] does not offer a very good ‘first line of defense.’” Despite his protestations, that was where the Nationalists intended to fight it out.

Civil war between the Kuomintang and the Chinese Communist Party forces had been going on since 1927, as each sought to gain control over a vast land that had long been divided among warlords and colonial powers. Nearly a decade of brutal war with Japan had put the civil war on hold, but fighting resumed in late 1945 between Mao Zedong’s Russia-backed People’s Liberation Army and Chiang Kai-shek’s Nationalist armies, which had U.S. backing and ruled most of China. Support for Chiang’s corrupt and repressive Kuomintang government wavered, even in the more prosperous urban centers, including Shanghai, while Mao Zedong’s crusading army won a wide following, especially in the impoverished countryside. By April 1949, only Shanghai and few other urban centers near the China Sea remained firmly in Nationalist hands.

A ship overloaded with cars, furniture and other household possessions, as the Kuomintang leaders fled Shanghai before the fight, stopping first at Caltex to refuel.
Carolyn Davidson Hill

That month, Hill watched a stream of outbound ships pulling in for oil at Caltex. They were overloaded with cars, furniture and other household possessions, as the Kuomintang leaders fled Shanghai before the fight, which arrived in the early days of May with the sound of gunfire “on a wind from the south.”

The Battle of Shanghai broke out in full on May 13. “We heard a lot of artillery and machine gun fire off and on all night, also there were planes flying nearly every time I woke up,” she recorded. In the days that followed, fires burned all along the horizon.

Caltex officials radioed May 19 that they could still send a boat to bring Hill to the relative safety of central Shanghai. She noted with insouciant delight, “Hod replied: ‘Carolyn says thanks but is having fun here.’” This was Hod’s first civilian job after serving in the Army Air Forces in China during the Second World War. As war approached their home, he wasn’t going to abandon his post. And Carolyn, a former State Department staffer who was dispatched in the war to French North Africa, Tehran and China, wasn’t about to leave his side.

That night, she may have questioned her decision after seeing “a regiment of battle-weary troops” retreating through the terminal. With the Nationalist lines drawing back, she realized that “we’ll be actors as well as spectators” in the battle.

By May 20, she could see fighting among armored vehicles, strafing airplanes and artillery, just beyond the Standard-Vacuum walls. As “intense fighting” spread into the Standard-Vacuum terminal grounds, one of the tanks caught fire, with burning oil flaring out like giant blow torches. Throughout the ordeal, those tanks were a primary concern: War is always dangerous, but war in an oil terminal is a whole different story.

This fear came into focus as Nationalist troops fell back, breaking down Caltex’s walls and stockpiling ammunition inside the oil terminal, getting ready to make a stand. Hod tried to convince them of the danger of occupying the terminal, warning them that “a single spark would turn this terminal into a fire-breathing dragon which would immediately consume the whole island and all upon it.”

Chinese junks and other boats in flight from the anticipated People's Liberation Army attack on Shanghai.
Carolyn Davidson Hill

Ignoring his warnings, snipers took up positions atop oil tanks. Communist guns aimed at them. Hod radioed that fires had broken out and crews were struggling to bring the “roaring flames on top of roof [of a storage tank]” under control, “interrupted by pot-shots.” The firefighters who dared to climb onto the roof could feel the heat “through soles of shoes.”

News reports indicated that Communist forces, after an initial approach, had pulled away from Shanghai’s inner perimeter, in an effort to draw government troops toward outer battle lines—including those nearest Caltex. Carolyn Hill ruefully remarked, “Not that we wish the people in Shanghai any harm, but they, at least, aren’t sitting on top of liquid dynamite….”

A Vision of Hell

On May 25, Nationalist forces abandoned central Shanghai, fleeing in a desperate Kuomintang “Dunkirk” to the Island of Formosa—Taiwan. At Caltex, all hell was about to break loose.

Around 6:30 at the start of that long final night, the Hills were sharing a drink in their living room “when we heard several loud whams outside.” Shells were exploding “in the water not 50 feet from our pontoon where an ammunition barge was tied up.” If it blew, the entire terminal would go up. They ran out of the house through the tank farm to seek shelter next to a firewall, hoping they wouldn’t be engulfed in a vast inferno. When they eventually stole back to their house to find food, they could see from their porch what Hill estimated were five thousand troops crowding the waterfront and pier.

A transport pulled in. “A crescendo of fear and rage” rose “as the soldiers struggled to board [the ship],” while shells dropped nearby. The overloaded ship moved away; before long another arrived. The troops jostled to board, sensing “that this was their last chance” to escape, and she could hear the cries of those who fell and drowned. Across the river, a huge fire broke out, “lighting the sky up to the zenith with bright red.”

Barrels of aviation fuel and gasoline stacked inside the Caltex property such that “a single spark would turn this terminal into a fire-breathing dragon which would immediately consume the whole island and all upon it.”
Carolyn Davidson Hill

Then to the north, the Kuomintang’s enormous Wusong Fort arsenal “went up…[with] a big flash, followed by a shaking light over the sky…punctuated by brief explosions and flashes.” Shanghai’s last defenders were now trapped.

Exhausted, she, Hod and eight other company men sprawled out across their house floor. They were dozing when she was startled awake by a whisper and then a shout from Hod: “’They’re coming in the windows!’” Flashlight beams cut through the darkness. Hill looked up from the floor at two Nationalist soldiers, “as astonished as we were, having thought, no doubt, that they were coming into an empty house….” She thought that “only blind luck” kept the men from shooting.

Rifle shots and machine gunfire were “coming rapidly closer” when a watchman came running in, shouting. “The Communists,” Carolyn Hill recorded, “were here.”

Though Mao would not proclaim the birth of the People’s Republic of China until that fall, the People’s Liberation Army had effectively won the civil war.

Though this moment would prove a historical turning point, cataloging how it happened has proved difficult. Firsthand accounts of the collapse of China’s most important city came down almost exclusively from official Communist sources. Carolyn Hill’s diary, of course, is an exception. The wartime drama she depicts along the banks of the Huangpu River provides a unique eyewitness description of the panicked flight out of Shanghai of the Nationalist elite, the intensity of the fighting around the city and the battlefield death throes of the old China. It is an on-the-spot account of the closing scene in a vast and epic war that still influences China’s history — and our own — even 70 years later. It would take nearly that long for her words to become public.

Nationalist troops march through the Caltex property to the battlefront. A Caltex oil tank is visible in the background.
Carolyn Davidson Hill

Within a few months of the formal establishment of the Peoples Republic, on Oct. 1, 1949, the new government began to expropriate Western properties. Carolyn and Hod flew to Hong Kong and eventually went back to the United States. They divorced in 1956.

In 2015, the younger of Hod’s two daughters and his oldest step-son, while clearing out a storage unit owned by his step-daughter in Auburn, Mass., stumbled upon a box at the bottom of which sat the diary typescript. They eventually brought it to the attention of Tracy Leddy, Hod’s oldest surviving child. “It was like a hidden treasure,” she says. “I could not believe what I was reading.” After that Carolyn’s adopted daughter, Elizabeth Hill, unearthed photos and other pertinent papers stored from those few epic months at Caltex. The Hill family brought the material to my attention.

In a postscript to the diary that Carolyn penned in 1952, she insists that “…the record comes to you exactly as I banged it out on my portable at various hours of the day and night during the Battle for Shanghai.” She added that her record of those epic days 70 years ago “was written only for ourselves.” And now for the world, too.

Marc Wortman is the author most recently of 1941: Fighting the Shadow War: A Divided America in a World at War.