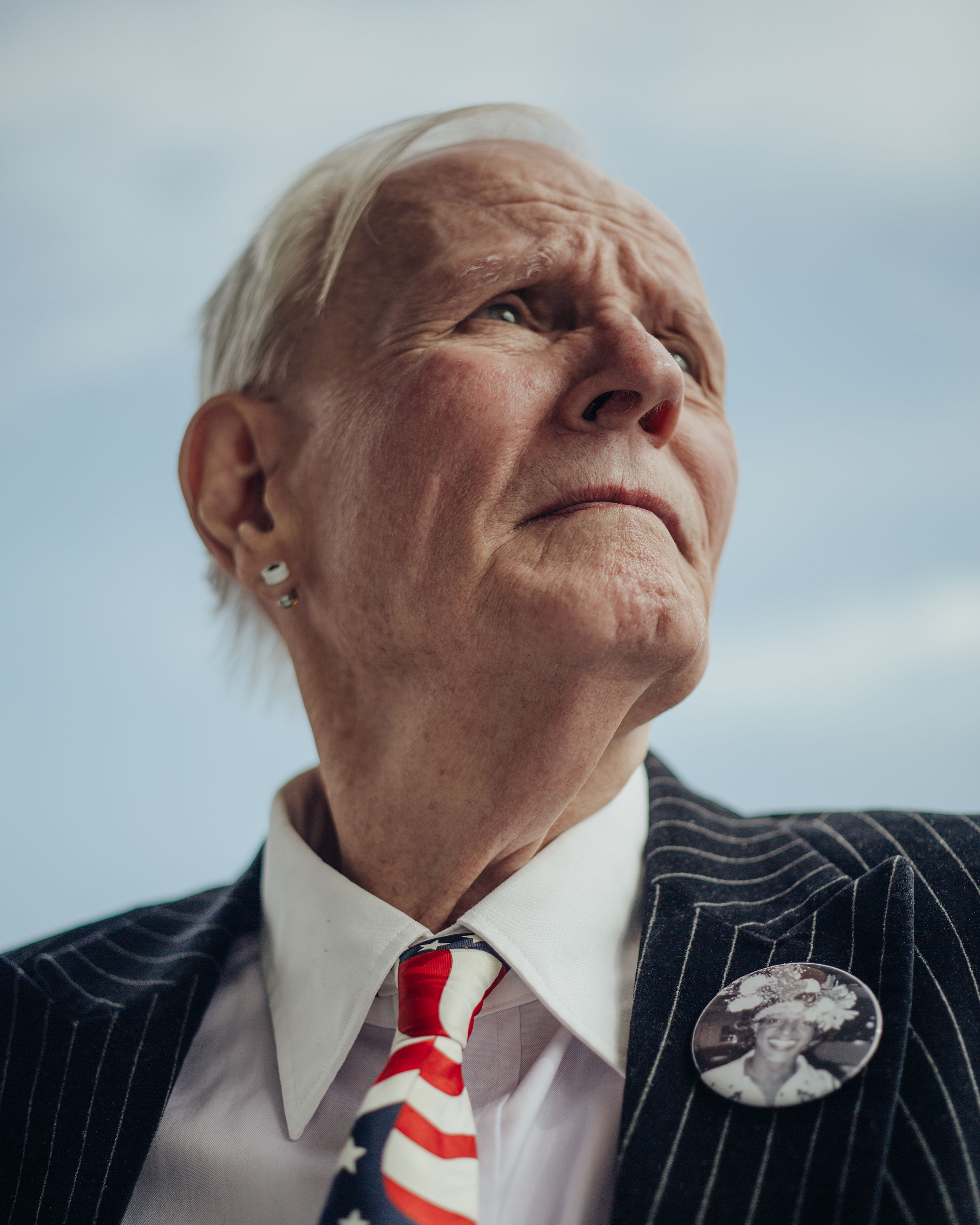 Randolfe Wicker at his apartment in Hoboken, N.J.
Sasha Arutyunova for TIME

'The Beginning of a Conversation': What It Was Like to Be an LGBTQ Activist Before Stonewall

In a living room in Los Angeles in 1950, a handful of men sat down for the first meeting of the Mattachine Society
By Jess McHugh

Randolfe Wicker is wearing a suit and tie. Today, it’s a suit with a cartoon Lady Liberty tie and a button of Stonewall activist Marsha P. Johnson pinned to his lapel—accented by a pair of earrings made out of screws. But for several decades, Wicker, now 81, was never seen in public without his suit-and-tie uniform in a much more traditional black.

He was wearing that black suit and tie at what’s thought to be the first U.S. picket for gay civil rights, which took place in New York City in 1964. He wore it when he answered questions on-air in 1965 as one of the first openly gay men to appear on television. And he donned that suit again when he protested New York’s prohibition against serving gay patrons during a “sip-in” in 1966. Wicker jokes that he looked like a preacher for most of the 1960s—but for one of the earliest LGBTQ activists, it was a political choice.

“A black suit and tie works wonders anywhere, because if you wear a black suit and tie people will stop and listen to you and consider what you have to say,” he told TIME one recent afternoon at his apartment in Hoboken, N.J. “It was assumed we were mentally ill; it was considered that we were certainly criminals, and we were also considered to be morally depraved. But people would still sit and listen to you, and that’s the beginning of a conversation.”

The staid fashion choice went hand-in-hand with the work Wicker did with the Mattachine Society, which he joined in 1958 when he was 20 years old. The Mattachine Society—considered one of the earliest gay activist groups in U.S. history—had already existed for nearly a decade at that point, and its work in advocating for equal civil rights for gay people predated the Stonewall Uprising in New York City by nearly 20 years. Many people understand the protests at the Stonewall Inn as the effective start of the LGBTQ rights movement—and while that 1969 protest signaled an expansive shift in the movement, it was hardly the beginning.

“A movement can’t just materialize overnight,” says George Chauncey, a professor of history at Columbia University and author of the book Gay New York, of the Stonewall protesters. “Even when they didn’t always know it—because they were often too young to know what the Mattachine Society and Daughters of Bilitis [Mattachine’s lesbian counterpart] had done before them—they actually relied on the communications network that Mattachine had set up.”

In the 1950s, even in coastal metropolises like Los Angeles, San Francisco and New York City, being gay—or being suspected of being gay—carried threats to every aspect of a person’s life. Gay people were banned from serving in the military and in civil service, and the government purged them from their ranks by the scores in a period now referred to as the Lavender Scare. Gay characters were even barred from appearing in entertainment. Employers in the private sector could fire suspected gay employees without repercussions (which is still legal in many states across the country). There were also the physical dangers, with police violence and entrapment chief among them.

Amid this atmosphere, in a living room in Los Angeles in 1950, a handful of men sat down for the first meeting of the Mattachine Society, a secret “homophile” group.

Given the LAPD’s predilection for pursuing gay men—and even fears over the wire-tapping of FBI director J. Edgar Hoover—the early meetings were shrouded in secrecy. The group took its name from medieval dancers who performed in masks, disguises that allowed them to freely criticize their society. Harry Hay, a labor activist and outspoken civil rights advocate, created the society as a place where gay men could meet and discuss issues like discriminatory policing and employment. It was also a social group, providing one of the only safe spaces for gay men to meet, drink, and become friends and even lovers.

By 1952, the group turned its eye to the issue of police entrapment.

Thousands of men and women across the country were arrested on charges related to their sexuality each year throughout the ‘50s, and in California, certain sodomy convictions could carry a maximum sentence of life in prison. And even when the charges resulted in a slap on the wrist from a judge, an accusation could result in the loss of jobs or even homes. But after Mattachine cofounder Dale Jennings was followed and harassed by a police officer, the society mounted a defense—and won the case. Within just a few years, the group would grow to include thousands of members across the country in places like New York City, Chicago and San Francisco.

The New York City chapter organized lectures about how to fight arrests and solicited research from scientists and psychologists who could act as spokespeople for their movement. Like other activists from that era, the Mattachines used a mixture of demonstrations, civil disobedience, legal avenues and grassroots information campaigns.

Randy Wicker had been an activist since he was a student at the University of Texas in the late 1950s, and by the summer of 1958 he started volunteering with the Mattachine Society. One of his earliest memories of that time was passing out flyers for a lecture hosted at their downtown offices. Convinced that they could bring in more interest to their activism, he worked vigorously to drum up support for that lecture. Instead of the usual 30 participants, Wicker estimates he packed the room with 300 people—eventually leading to the group’s eviction from their space.

From the start of his involvement, Wicker tried to push the group in a more radical direction.

The late ‘60s marked a parallel split in the civil rights movement happening across the country. As civil rights legislation stalled while violence against black people surged, non-violence lost its appeal to some. The Black Panthers began their ascent in 1966, forged in the crucible of that year’s violent disappointments.

Scenes from around Wicker's home.
Sasha Arutyunova for TIME

With his urging and under new leadership, the Mattachines started to shift their tactics. By 1966, they staged a “sip-in”—a tongue-in-cheek nod to the era’s sit-ins—at bars across the city. The New York State Liquor Authority prevented bars from serving gay patrons, asserting that just being gay was a form of disorderly conduct. Wicker, along with Mattachine New York President Dick Leitsch and other members, went to bars around Manhattan, telling the owners that they were “orderly homosexuals” who wanted to be served. When they tried to order at Julius in Greenwich Village, the bartender slapped his hand over a glass and denied them service. “Three deviants invite exclusion from bars,” read the headline in the New York Times the following day. But by 1967, the New Jersey Supreme Court would rule in favor of the Mattachines in a bar discrimination suit.

While a cheeky protest might not seem revolutionary, bars represented both the problem of discriminatory policing and a much broader exclusion from public life. Part of what the Mattachines did was to establish LGBTQ people as a minority group deserving civil rights protections. And the “sip-in” served as a foreshadowing of the protest that would erupt just a few streets over from Julius only three years later.

By the time police raided the Stonewall Inn in 1969, setting off a chain of events that would usher in a new era for the LGBTQ movement, young gay men and women were still coping with many of the same issues.

Some of them had specifically clashed with the Mattachines’ stances — like Martin Boyce, who had just turned 21 in 1969 and spent most of his nights that year dancing with friends in the cafés and bars in Greenwich Village. Boyce says he had earlier been turned away from a Mattachine meeting for dressing in drag, only to be thrust into activism the night police raided the Stonewall Inn. On a recent afternoon, he met up with TIME in the bar where it all started on Christopher Street. In that neighborhood 50 years ago, Boyce and his friends—who dressed in scare drag (“think Boy George,” he says)—had finally found a place where they didn’t have to look over their shoulder all the time. When police raided the bar in the early hours of June 28, Boyce called it “the last straw.”

Wicker at home in Hoboken, N.J.
Sasha Arutyunova for TIME

“The raid was not only a raid on our regular bar. It was a raid on a popular dancing bar in the public eye, on the street that was considered our turf,” he told TIME. “The raid destroyed all of this kind of equilibrium.”

Instead of going along with police demands, the bargoers that night fought back, in a multiple days-long rebellion. Boyce became an activist in the new post-Stonewall movement, and seemingly overnight, the Mattachines and their methods became, to many, obsolete. The idea of incremental change was thrown out like a brick through a bar window.

Randy Wicker would remain an activist throughout his life, though he too would move away from the Mattachines and toward more radical groups like the Gay Activists Alliance and later the Radical Faeries. But he hopes that the 50th anniversary of Stonewall will also serve as an occasion to remember the framework that he and others built through two decades of slow work.

“One thing I think that people don’t appreciate is how tediously slow change does come to any society,” he said. “The only way we got to where we are today was literally 50 years of talk.”

Jess McHugh is a New York-based writer. Her work has appeared in The Nation, The Paris Review and The New Republic, among other outlets.