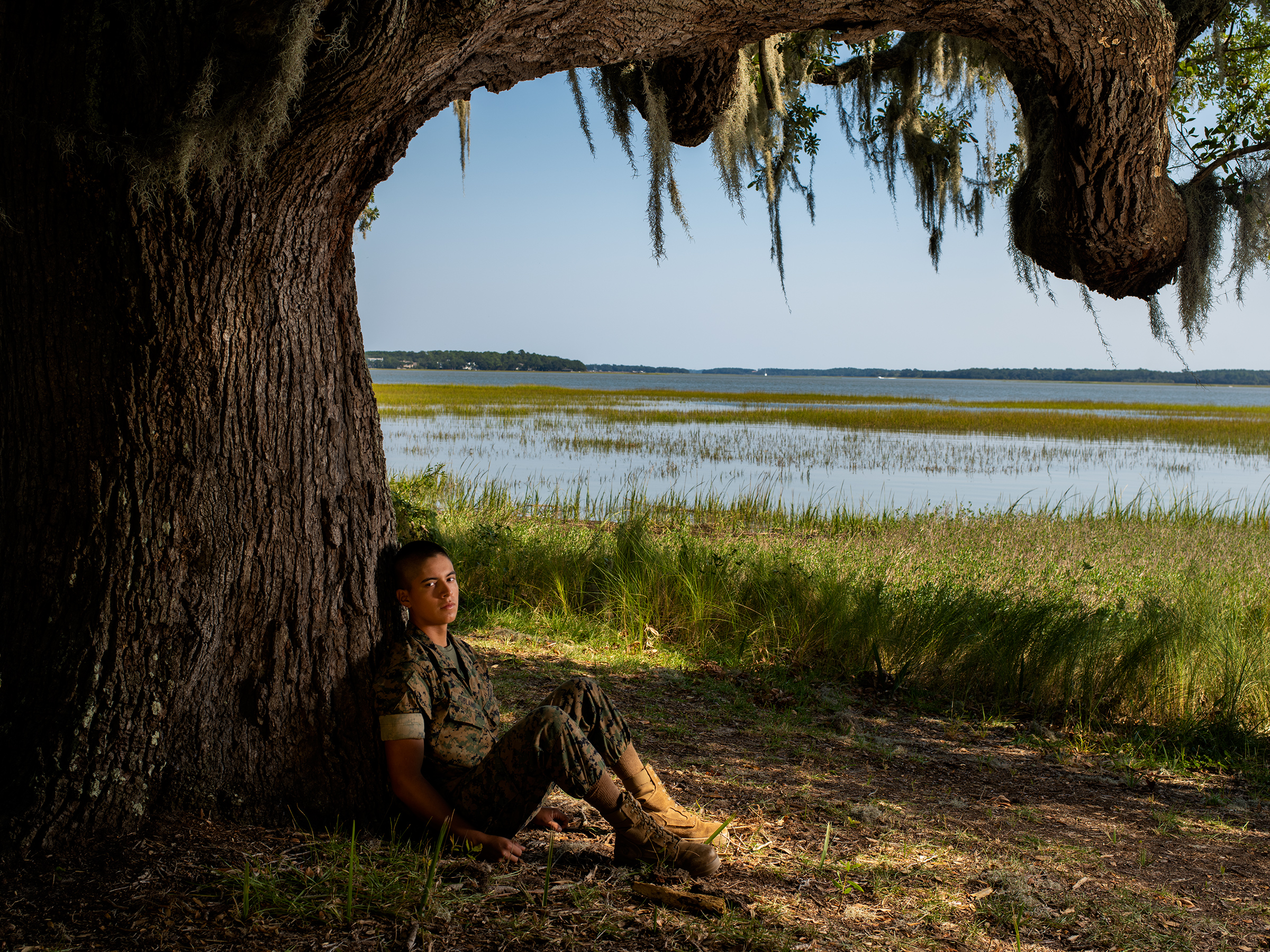 Matthew Poblano, 17, of Bay Shore, N.Y.: "I applied for Naval ROTC and didn't get accepted. I still wanted to be an officer. My recruiter told me that I could enlist and then go to college as a reservist and become an officer afterward ... All Marines know that they're war fighters. You join knowing that if you have to go to war, you go."
Gillian Laub for TIME

A New Generation Enlists for a War Older Than They Are

Reporting by Elliot Ackerman | Photographs by Gillian Laub for TIME

This week’s special report on the U.S. military, as a new generation joins its longest war, is the latest in nearly a century of TIME coverage of American armed forces and the allies fighting alongside them.

In recent decades, society has increasingly focused on how much the military, its actions and the treatment of veterans square with the nation’s ideals. In a 1981 cover on “forgotten warriors” from the Vietnam War, TIME reported that the turbulent spirit of the ’60s had compounded an already “abrupt, surreal transition” from the jungle: “Citizens no longer knew what their citizenship meant; men no longer knew what their manhood demanded. The war cost more than Americans could immediately pay.”

During the Iraq and Afghanistan conflicts, TIME covers in 2011 and 2013 highlighted vets who, after completing their uniformed service, continued to exemplify citizenship by starting nonprofits and addressing every kind of wound.

In this week’s cover story, Elliot Ackerman, a Marine veteran who is both a Silver Star recipient and a National Book Award finalist, argues that an all-volunteer military lets most Americans avoid the cost of war. The U.S. had no “forever war,” Ackerman notes, when it had a draft. At Parris Island, South Carolina, Ackerman interviewed and award-winning photographer Gillian Laub made portraits of new Marines, some born after 9/11, who are training for the wars they have never known life without.

“A lot of people waste their time doing nothing,” said Gregory Grammer of Myrtle Beach, S.C., one of three teens featured on separate covers. “I can say for sure that I joined the Marine Corps, and I did something.”

Ashley Luna Gorbea of Springfield, Mass., said her earliest memory of the 9/11 wars is from middle school. “They had a moment of silence, and I was like, whoa, and I asked my history teacher what’s so special about today. She said that 9/11 was a moment when the whole country came together, and that really struck me. How something so big could make us all unite.”

“In my school we didn’t talk about war much. Portland is a place where we don’t talk about the military. Growing up, it never felt to me like a war was going on. The first time I remember learning about 9/11 was around seventh grade. 9/11 all feels like history to me.” — Cierra Smith, 18, of Portland, Ore.

“I have a personal experience with 9/11. Because of 9/11, I was almost a miscarriage. Those events scared my mother, and her blood pressure shot up. Because of this, I wound up being born prematurely and ended up in an incubator. That shouldn’t have to happen to anyone else.” — Alejandro FarciertMejia, 17, of Bronx, N.Y.

“My father is a commercial pilot. I decided to join the Marine Corps because it’s more of a challenge and it will help me become disciplined on my way to becoming a pilot. My dad did want me to do the Air Force, but it had to be the Marines.” — Mohamed Abdelhalim, 17, of Queens, N.Y.

“My mom came here from Mexico on her own. I didn’t have a male role model. My mom showed me you don’t need someone to rely on to be successful. I want to show her that I can be a strong, independent woman and make her proud. I wanted to join the toughest branch of service.” — Itzel Andrade, 18, of Donna, Texas.

“9/11 really changed a lot of people’s lives. We moved out of New York City two years after 9/11. My mom didn’t tell me the reason why we left. But my mom had a friend who died in the attack, and I’ve always wondered if that’s why.” — Denya Sweet, 18, of Charlotte, N.C.

“My grandfather was in the Marine infantry. But I’m not sure exactly what he did. Until now, I never thought to ask … Growing up, I never knew we were at war. I feel more mature being a Marine. I feel like my own person now.” — Kylie Murphy, 18, of Norton, Mass.

“I was in elementary school. The teachers would always talk about 9/11 every year and we would have a moment of silence. It inspired me to join. It motivated me to want to fight for my country … No one was supportive. I had to convince my mother. She signed me up because she knew that if I wanted to do something I would do it anyways. My friends didn’t want me to join. They thought I was crazy.” — Leon Liang, 17, of Brooklyn, N.Y.

“It was a shock to everyone that I joined the Marines. I’ve always been more an academic type. But once they saw that my mind was set, everyone supported me … I joined the Marines to serve my country. Marine are always ready to fight. I feel like I’ll be ready.” — Samantha Delgado, 17, of Sylmar, Calif.

“My mother always wanted to join the military herself. But she didn’t have papers. Then my mom got her citizenship and did everything right. By then she was too old. So, I’m fulfilling her dream and my own dream at the same time … Recently, my mom wrote me a letter about 9/11 while I was here. She remembered running into the room with my crib that day, holding me, and crying. I didn’t realize what a big impact it had on people until I came here and she wrote me that letter.” — Guadalupe Sanchez, 18, of Mount Vernon, Wash.