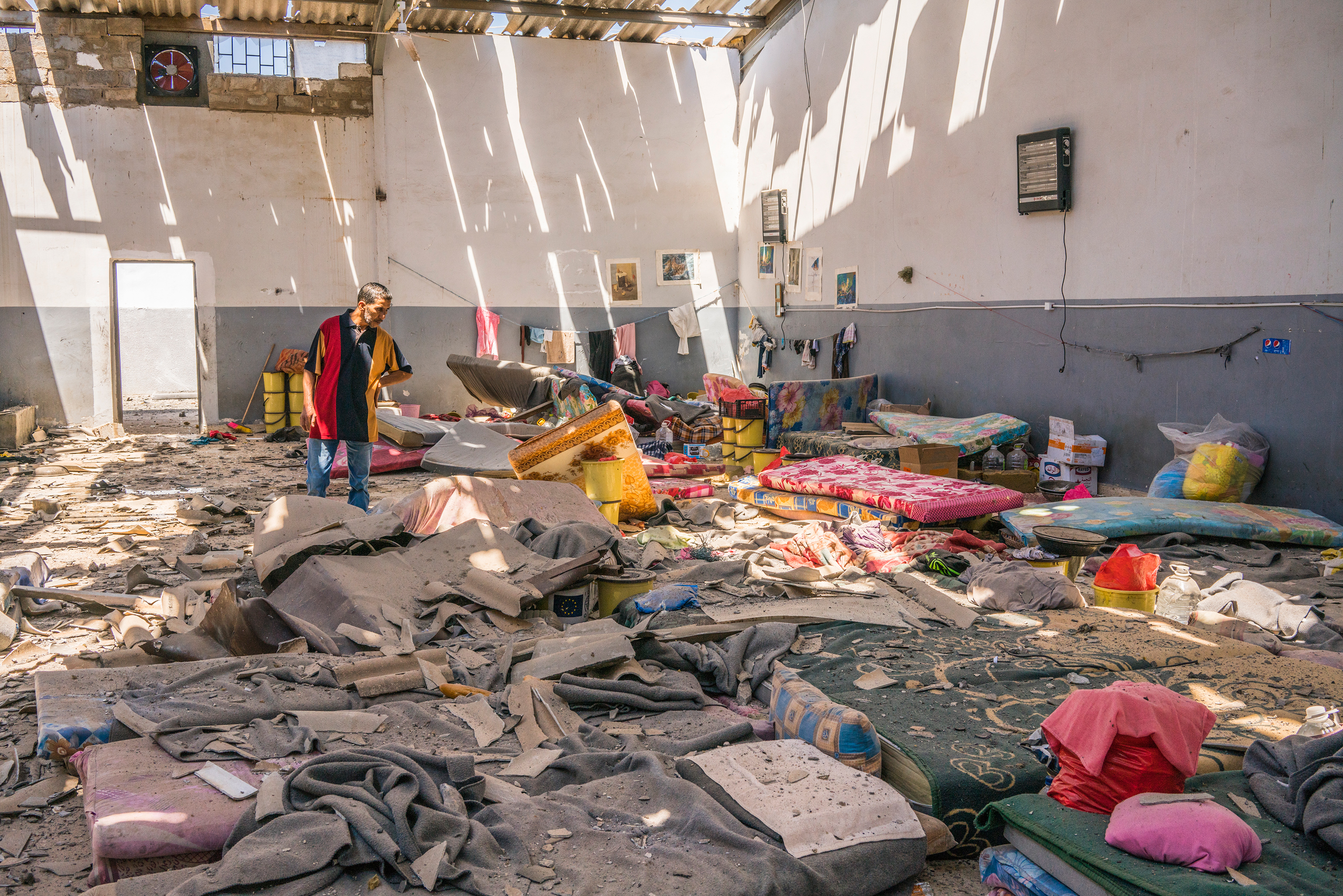 An early morning airstrike on July 3 killed at least 53 people at a migrant detention center near Tripoli only two months after the U.N.’s refugee agency had warned that detainees were at risk at the facility. In a stark illustration of how migrants and refugees are caught between Libya’s warring factions, the U.N. on July 4 said it had information guards shot at detainees they attempted to flee the blast.

Italian photographer Emanuele Satolli tells TIME he arrived at the Tajoura Detention Center on the outskirts of Libya’s capital hours after the airstrike destroyed a shelter that housed some 610 people, mostly migrants and refugees from Sub-Saharan Africa. A young Sudanese man told Satolli about being among a group who had tried to force their way out of the building moments after hearing an initial blast nearby. When they managed to break through the locked door just as a second air strike collapsed a roof in an adjoining room, he said, a guard fired into the air in an apparent bid to prevent them escaping.

After the strike, Satolli saw hundreds of other migrants gathered on mattresses outside the collapsed building, where they had spent the remainder of the night. “It was as if they had lost hope,” he said. “They didn’t even have the will to be angry.”

Libya’s U.N.-backed government blamed rebel commander Khalifa Hafter and his self-styled Libyan National Army (LNA) for staging what it described as a “premeditated” and “precise” attack on the facility. The U.N. has called for an independent investigation into the air strike, which it said could amount to a war crime.

Libya currently detains thousands of migrants and refugees in government-run facilities under conditions human rights groups say contravene international law. In 2017 Italy, backed by the E.U., agreed a deal with Libya’s coast guard to prevent migrant boats reaching European shores and return those it detains back to Libya. But Human Rights Watch and other observers have documented nightmarish conditions at Libya’s migrant detention centers, where those arbitrarily detained are at risk of torture, sexual violence, extortion, and forced labor.

This May, the U.N. called for the immediate evacuation of refugees living in conflict areas, after an airstrike hit a target less than 100 meters from the Tajoura facility.

In a July 3 statement calling for an independent inquiry into the strikes, the E.U. rebutted accusations of negligence, saying it had tried to remove migrants and refugees from detention centers near the frontline. “Where possible, we have enabled them to find safety outside Libya – these efforts must continue and be stepped up urgently,” it said. “Unfortunately, many more are at risk and should be transferred to safe places swiftly so they can receive assistance and be evacuated.”

The strike on July 3 comes amid a protracted siege that has led to hundreds of deaths since Haftar, a naturalized U.S. citizen who rose in influence after helping oust Muammar Gaddafi in 2011, launched a bid to wrest control of Tripoli from the U.N.-backed government on April 4. On July 1, his armed faction announced that “traditional means” of taking the city had been exhausted and warned it would step up its campaign of airstrikes around the city.

Haftar’s group initially accused pro-government forces it was fighting of accidentally hitting the camp with shellfire. In subsequent statements the armed group did not explicitly confirm or deny responsibility for the strike, but denied targeting civilians and said it only attacks military targets.

“It is very plausible that peripheral buildings in the grounds of this detention center could have been used to store [military] equipment,” says Claudia Gazzini, International Crisis Group’s senior analyst for Libya. On July 4, two migrants that survived the attack told the Associated Press they had been conscripted by a local armed group to work in an adjacent weapons workshop.

Although European, U.S. and Gulf leaders have all endorsed Libya’s U.N.-backed government, U.S. allies including the UAE, Egypt, and Saudi Arabia have provided financial and military support to the rebel commander, as has Russia. In a phone call with Haftar in April, President Trump appeared to signal a shift in U.S. policy, praising his role in fighting terrorism and talking of a “shared vision” for Libya’s future.

The State Department described Wednesday’s attack as “abhorrent” but did not call for a truce. And at a closed-door U.N. security council meeting on Wednesday night, the U.S. reportedly blocked a proposed resolution from the U.K. calling for a ceasefire. That “would chime with the U.S.’ position over the past few months whenever there was a security council meeting” says Crisis Group’s Gazzini. She adds that military ties between the LNA and France, which Italy has repeatedly accused of covertly supporting Haftar, “appear to have continued.”

A migrant, who was among the dozens injured during the attack, lies in a bed at Tripoli Central Hospital on July 3.
Emanuele Satolli

In a phone call from Tripoli, Satolli told TIME about the devastation and despondence in the wake of the July 3 strikes on the detention facility. In a room buzzing with flies, he saw disembodied hands, a thumb, and part of an abdomen, scattered among concrete debris, mattresses, and yellow aid agency-issued buckets.

At a hospital ward where some of the wounded had been taken for recovery, families of Libyans with ailments unrelated to the attack thronged the corridors. But in the room that housed the injured migrants, there was nobody in attendance. “That was what struck me the most,” he says. “They were completely alone.”