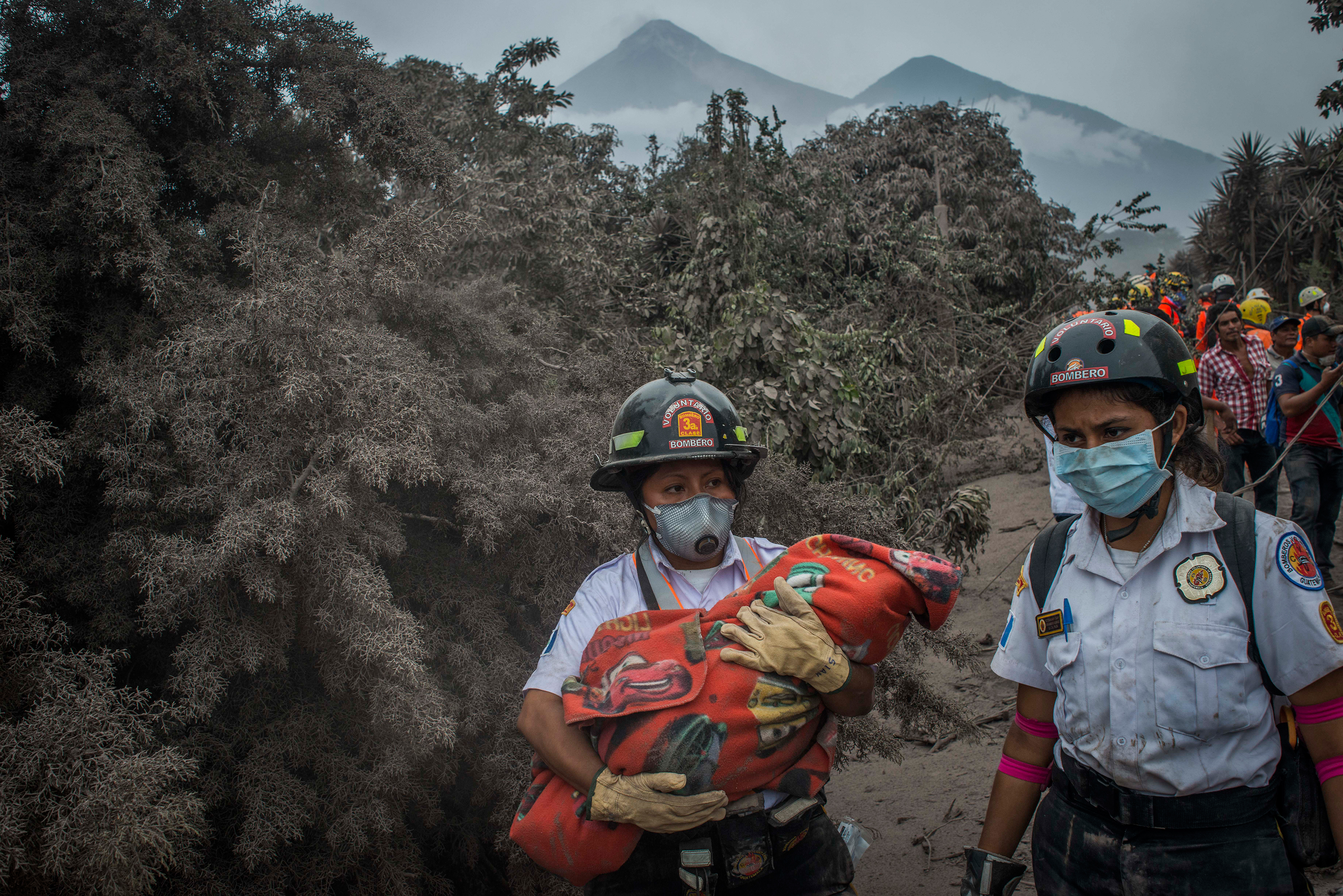 An emergency worker carries the body of a child found in the ruins of San Miguel Los Lotes on June 4.
Daniele Volpe

'You Can Sense That You’re Walking Above the Dead': A Volcano's Wrath in Guatemala

Photographs and Text by Daniele Volpe

The eruption happened on June 3 around midday. I was eating pizza with a friend and his family on the roof of my house in Guatemala City. Suddenly, a heavy black sand began to rain down. It’s not too unusual here because two very active volcanoes, the Volcán de Fuego and Volcán de Pacaya, are close to the capital.

We began to understand the magnitude of the situation as friends began to post on social media and after seeing local news reports about the Fuego eruption. My friend, who is also a journalist, and I decided to make the trip, about an hour and a half away, the next morning.

The volcano directly affected several communities nearby, but the village of San Miguel Los Lotes was completely destroyed. That’s where we started. I had filled my backpack minimally: one camera (not two as usual), manual lenses to avoid any technical problems due to the fine ash, a mask that was essential to breath in the dusty air.

I don’t generally cover breaking news. When I do so, I try to complement the work of the wire photographers. So I focused on this community and the rescues.

In the abandoned houses, I felt an incredible sense of quiet. Everything was covered in ash, silent, motionless.

That morning, there were two alerts about volcanic activity, so we had to leave the most intense area after about an hour or so of access. We decided go to the city nearby, Escuintla, the location of a shelter for those who were evacuated and an improvised morgue. In both places, people were looking for their relatives on the lists of survivors or deaths.

Rescue workers, clad in masks to protect them from the air, in the ruins of San Miguel Los Lotes on June 5.
Daniele Volpe

The challenge for me was emotional: a lot of death, and the pain of survivors who were looking for some relatives amid the uncertainty. As of Wednesday evening, at least 99 people were known to be dead, and about 200 people were missing.

It’s a surreal feeling to be there, more so than in the images I make. Two meters (about six and a half feet) of ash covers the village. Hot, really hot, ash. The homes became ovens because they were surrounded by the ash. The smell, it’s horrible. You can sense that you’re walking above the dead. It’s closer to death than I felt reading Dante’s Divine Comedy.

Walking around, I wondered why several animals like chickens, dogs and cats, had survived, and why clothes remained hung on a clothesline, yet cars were tipped over and electric poles had fallen down.

There’s an incredible sense of tranquility, almost peace, in the middle of a surreal desert. I saw it all in black and white. Just the sky remembered that colors exist.

Volpe’s account was condensed from an email interview. His words have been lightly edited for clarity.