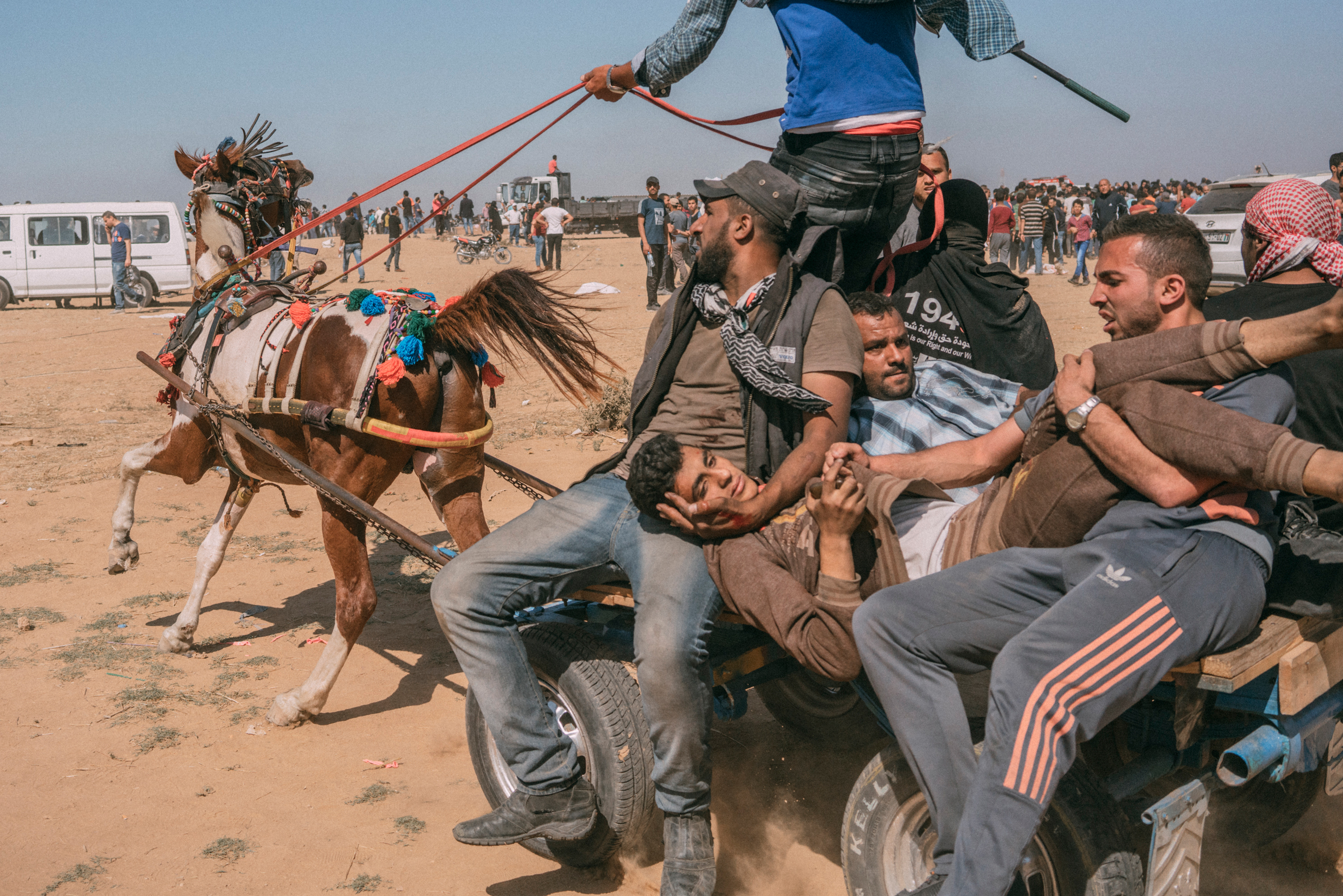 An injured Palestinian man is evacuated on a horse-drawn cart along the Gaza-Israel border on May 14, 2018.
Emanuele Satolli for TIME

By Karl Vick | Photographs by Emanuele Satolli for TIME

It is possible, in theory, that the parallel events of May 14 might affect the sympathies of Americans watching them unfold on the split screens of cable news channels.

In Jerusalem, the ceremonial opening of the new U.S. Embassy proceeded at a stately pace, President Trump’s daughter Ivanka unveiling a plaque that announced not only the new address for U.S. representation in Israel but also a new, snugger alignment with the host nation. A few miles away, cameras captured the chaos as Israeli soldiers methodically cut down some 2,700 Palestinians, 60 fatally, as they marched toward the fence that separates Israel from the Gaza Strip.

That patch of land, which hugs the Mediterranean Sea between Israel and Egypt, is home to some 2 million Palestinians, most of whose families once lived on land that is today Israel. They are stubborn refugees with no prospect of return, physically confined in an area only twice the size of the District of Columbia and with no prospect of improvement. Last year a Gaza home had four to six hours of electricity a day and water for six to eight hours every fourth day. Youth unemployment is 60%.

“People are almost dead here,” says Amal Murtaja, a teacher at the American International School in Gaza, explaining why thousands have gathered at the border over the past six weeks. “They have zero money to support their families. So they thought, ‘We’re dead anyways.’”

The idea of assembling at the fortified fence, both to protest the embassy move and to assert a right to return, first took root on social media. Political factions soon glommed on, including Hamas, the Islamist group that controls the Gaza Strip. Inside Gaza, that brought a level of official organization to the project. Outside Gaza, it made an emotionally complex undertaking easier to condemn.

Partly funded by Iran, Hamas is seen as a terrorist group by the U.S. and Europe; it sent suicide bombers into Israel during the armed uprising of 2000. Its imprimatur, and presence, allowed Israel to cast the confrontation in purely military terms. “The responsibility for these tragic deaths rests squarely with Hamas,” White House spokesman Raj Shah said on May 14, declining the balancing language of previous Administrations. “Israel has the right to defend itself.”

With Trump in the White House, Israel has never sat taller in the saddle. The Iran nuclear deal is gone, and the opening of the embassy undercuts Palestinian aspirations for a Jerusalem capital of their own. The move was welcomed in Israel as a moment of validation 70 years to the day after its founding. The U.S. was the first country to recognize the new nation, a move Americans supported 2 to 1. Decades later, Americans continue to favor the Israelis over the Palestinians in ratios that are the mirror opposite of how the sides are viewed in Europe. There, newspapers referred to the Gaza “massacre.”

What has changed in the U.S. is the nature of the support. A March Pew poll found Republicans three times as likely as Democrats to say they prefer the Israeli side (half of Democrats sympathized with Palestinians). The GOP’s backing is driven partly by evangelical Christians, whose zeal Israelis view uneasily, and partly by Trump, who swept aside the pretense of “honest broker” maintained by previous Administrations and moved the embassy out of Tel Aviv, where other nations keep their diplomats in deference to Palestinian aspirations. The result is a consolidation of political power for Israel commensurate with its military might—both guaranteed by the U.S.

Left unsaid is why the U.S. ever wanted to be an honest broker. The specter of terrorism may animate Trump’s approach to the region, but U.S. diplomacy for decades has recognized that the Palestinian struggle is for nationhood. And with that prospect diminished, the despair surging in Gaza also subsumes the West Bank. That Palestinian territory is governed not by Hamas but by the Palestinian Authority, funded by the U.S. and Europe and led by Mahmoud Abbas, whom Washington maneuvered to succeed Yasser Arafat. Abbas, described by Pope Francis as a “man of peace,” once spoke ardently of giving Palestinians hope. But after the embassy announcement he appeared to have lost his own, delivering a speech on April 30 smattered with anti-Semitic rhetoric, which he later walked back. A sense of regression was afoot in the land.

“Look at our young men, everywhere, who are telling the Israeli occupation that we sacrifice our lives for liberation,” said Ghassan Wahdan, 41, at a May 14 protest near an Israeli checkpoint on the West Bank. “Either we want to live a decent life, or we don’t want a life.”

Israeli policymakers privately speak not of negotiating a final peace but of “managing the conflict.” In 2011, when the Arab Spring encouraged the idea that nonviolent marches could achieve anything, and at least 14 Palestinian protesters were killed breaching border fences, Israeli commanders expressed alarm at the toll. “We have to come up with an improvement in nonlethal weapons, no doubt,” one Israeli official said at the time. Yet no such innovation was evident on the Gaza border on May 14. Soon after the violence, the U.N. Security Council drafted a statement calling for an investigation, which was swiftly blocked by the U.S.

How Palestinians choose to proceed will also be key. One West Bank advocate for expanding nonviolent confrontation, Fadi Quran, argued that the deaths will play the role the 1960 Sharpeville massacre did in South Africa, where the slaying of 69 anti-apartheid activists changed the course of the nation’s history. “This year is going to be the year that either nonviolence succeeds in transforming how the struggle is won on the ground here,” Quran says, “or it’s the year where Palestinians realize that they cannot count on the international community, no matter what form of struggle they use.”

The conflict between Israel and Palestinians, in other words, may no longer be the burning central question of the Middle East. But it’s not for lack of fuel. —With reporting by Nuha Musleh/Ramallah

Karl Vick is an Editor-at-Large based in New York after four years in Jerusalem. Follow him on Twitter @karl_vick.