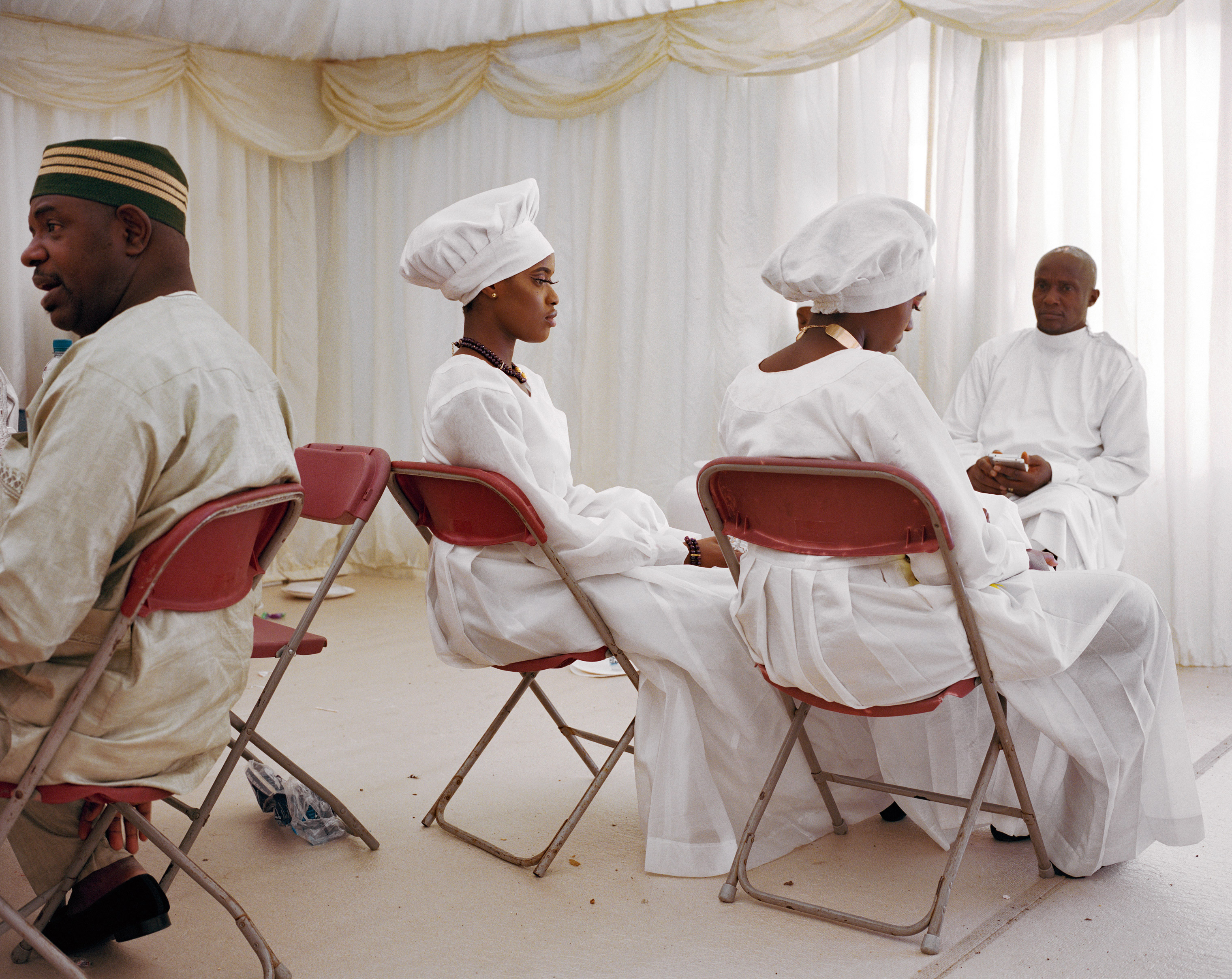 Mr Osigwa, Hannah and Edith seated in the food tent at Harvest Festival - a service that brings together all ages to celebrate God's goodness in creation every year.
Sophie Green

For Londoners who have been in the city for years, the change is obvious. Not long ago, the southeast neighborhood of Peckham was the heart of London’s Nigerian population. But over the last few years, you’re more likely to see white middle-class hipsters in their twenties and thirties posing in the pink stairwell of Frank’s, the local rooftop bar. Like Brooklyn in New York, most came to the area for the lower rents — and stayed because of the burgeoning creative scene.

The other side of Peckham lives on though, among its West African population. On a typical Sunday afternoon, Old Kent Road — a nearly two-mile stretch of chicken shops, cafés, barbers, and grocery stores — is crowded with worshippers from the Aladura Spiritualist churches dotted across the neighborhood. They’re easy to spot: the entire congregation wears distinct white clothing (known as “aso-ebi in Yoruba).

A young group of girls gather together and pose for camera.
Sophie Green
Two women enter a food tent at Harvest Festival - a service which brings together all ages to celebrate God's goodness in creation every year.
Sophie Green
Emmanuel proudly wears his tribal marks. These marks are part of the Yoruba culture and their primary function is for identification of a person's tribe or family and are considered symbols of beauty.
Sophie Green
Every congregation has a variety of customs: women wear hair coverings or gele before entering church.
Sophie Green

With roots in Nigeria, these “white garment” churches have increasingly sprung up in London, where there is a large West African diaspora. Inside the boldly-named Eternal Sacred Order of Cherubim and Seraphim church, men stand with outstretched hands, while women kneel on the floor in prayer. Children run around playing at the back. In front of a grand arch made entirely of balloons, two women wearing ivory satin bonnets pose for a selfie. It’s as stylized as it is spiritual.

Hannah stands on the street holding her baby cousin whilst members of the Congregation greet each other and chat in the background of the street.
Sophie Green

In the U.S., nearly 80% of black Americans identify as Christian, compared to 70% of white Americans. But the British public are quickly falling out of love with the church. More than half of the U.K. population identifies as having no religion and in England, less than 5% of the population attends church. But despite the decline among the broader population, the last U.K. census showed a 100% increase in black people identifying themselves as Christians.

White garment churches help shed light on why this religious community is growing against all odds. Over the past 2 years, Peckham-based photographer Sophie Green, and I were invited in to observe this community. In London, the number of black Africans jumped by over 50% between 2001 and 2011, the time of the last national census. As more families settle from countries like Nigeria, they bring their faith and practices with them. Neighborhoods in South London have become the epicenter of this revival; the Southwark area now has 250 African churches, the highest concentration outside the continent.

Josiah poses with some metal debris found on the street.
Sophie Green
Friends Idris and Peju play with chalk outside their church.
Sophie Green

With a strong faith in divine healing and the power of prayer, these Aladura (or white garment) churches have their origins in a movement in Ijebu-Ode in Ogun State in 1918, when a Pentecostal approach emerged out of Anglican traditions. They splintered into different denominations as founders established churches across the country and set upon missions through the countryside and in neighboring Ghana.

The distinct clothing style is inspired by a verse in the Bible (Revelation 19:8) that says fine, clean, white linen is “the righteousness of saints.” Beatrice Newman, a 30-year-old fashion designer who attends the Beneficial Veracious Christ Church on Peckham’s busy high street, Rye Lane, says the color code “shows unity” and is a way to “remember culture.”

Josiah, Bukky and Lauren stand outside church on children’s anniversary service wearing clothing that reads Money, Child, Peace as they collect donations from their fellow congregants for charity.
Sophie Green

Remembering that culture is a key reason why there’s barely an empty seat at these church services. The services feel steeped in Nigerian customs. “For me it’s like history,” says 27-year-old Michael Euba, a local DJ. “I’m at home.” Most of the sermons and hymns are in Yoruba, one of the three main languages spoken in Nigeria, and the pastors and elders of the church are often first generation immigrants.

In true Nigerian style, the schedule isn’t exactly strict. Unlike the shorter Anglican services consisting of a few hymns and readings, in a white garment church, the service usually begins at 10 a.m. and continues into the late afternoon. At one church, Nigerian meat pies were handed out in the final hour as worshippers sung Yoruba spiritual songs, as if to give them a boost of energy for the final act. What people going through a hard time really need, says Newman, is to be uplifted through song. Some families even travel from outside London to feel part of this community. At the end of one service, the Celestial Church of Christ serves fried rice, jollof rice, and beef stews to those dedicated enough to stay to the end.

But white garment churches are coming under increasing pressure. Oluwakemi House, a church tucked in a cul-de-sac just off Old Kent Road, is surrounded by cranes stretching high, to build new apartment blocks. With them will come new neighbors. Because black majority churches tend to use unconventional spaces for services, some share their buildings with other organizations. The Beneficial Veracious Christ Church, for instance, doubles up as a daycare center. “When you’re working with different organizations there are going to be periods where it can get a little bit messy and so everyone just has to find a way to work with each other,” Newman explains.

A father and his baby carried in a modern plastic carrier in one hand, Adidas pool sliders in the other, stands against a skyline dotted with cranes and shiny new-build flats.
Sophie Green
Dami poses with her crying baby. In the church a powerful ray of sunlight streams through a small window, highlighting them. Her baby who is restless after a long service, cries in her arms.
Sophie Green

The Holy Pentecostal Church Oke Anu in the now trendy Copeland Park in Peckham is now sandwiched in between the Bussey Building—a multi-level nightclub and cultural space—and a bar-cum-record store. In 2017, that church congregation found themselves at the center of a controversy after a white couple opened a new yoga studio in the Bussey Building complained to a newspaper that African churches and their “ghetto blasters” were ruining their classes. It was just one example of the challenges these congregations face amid an influx of white newcomers into historically immigrant neighborhoods.

Members of the congregation worship at an outside altar.
Sophie Green

Western influences are increasing pressures on the inside too. While the churches have a strong tradition of celebrating African heritage and spirituality, it doesn’t always appeal to the second or third-generation immigrants who have grown up here in the U.K. “A lot of the young people who come (to white garment churches) were born in it,” says a 25-year-old woman at the annual harvest, an all-day festival hosted once a year at the Celestial Church of Christ in Peckham. She reveals she’s been made to sit outside the church because she’s on her period, which is why she preferred not to give her name. That’s a common practice at the church, and women who have just given birth must wait for seven days to attend again. “When you were born here, or even your parents were born here, the services are harder to understand,” she says, speaking of the difficulty of relating to the language or sermon.

Helena and Kate sit together outside church.
Sophie Green
A young group of boys stand together posing strong and defiantly.
Sophie Green

White garment churches are home to a community of people caught between two worlds, trying to keep their faith and traditions alive in a Western and increasingly secular country. Still for now, the bright white robes are a reminder of this joyful celebration of African culture and spirituality, an act of resistance against the forces of gentrification.

Children chat between themselves outside their church before Sunday service begins. |
Sophie Green
The girls fan themselves down to keep cool in the hot sun outside.
Sophie Green

Sophie Green is a freelance social documentary and portrait photographer based in London. Her book ‘Congregation‘ is out from April 25, published by Loose Joints. Follow her on Instagram @sophiegreenstudio

Kemi Alemoru is a journalist based in London and the features editor at gal-dem, a publication written by women and non-binary people of color. Follow her on Instagram @kemstagramx

Dilys Ng, who photo edited this essay, is a photo editor at TIME. Follow her on Instagram @dilysng