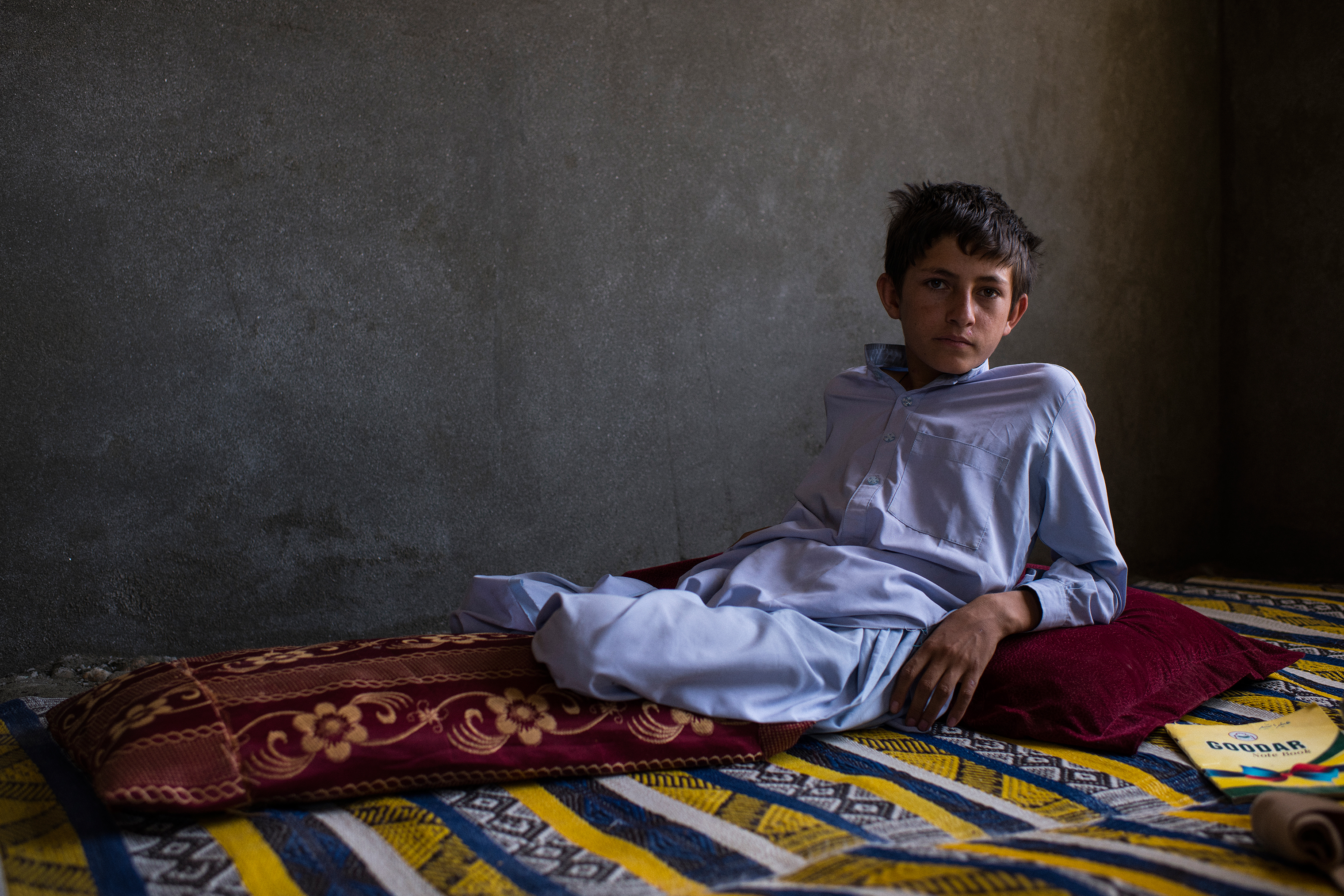 Shafiqullah, the eldest of the injured children, at home on June 25, a month after leaving the hospital. “Since the accident,” one cousin said, he is “even more driven to study.”
Andrew Quilty for TIME

7 Afghan Children Learn to Walk Again After an Explosion

Photographs and text by Andrew Quilty

The Ibrahim Khil family spent the night of April 28 unable to sleep as bullets cracked and rockets exploded outside their home. Hamisha Gul, the patriarch, feared his extended family of 24 wouldn’t survive until morning. But the children weren’t afraid. They were used to the sounds of war here in the tiny village of Saed Tuba, in eastern Afghanistan.

By 6 a.m., the fighting had stopped and some of the children began walking through the dry wheat fields to school. One came across a sleek, dull-green object, about the size of a police baton, picked it up and turned for home to show the others.

Accounts of what happened next vary from child to child, but after nearly a dozen children had gathered, the rocket-propelled grenade (RPG) fell to the ground. Hamisha Gul, 60, heard the explosion over the noise of his tractor, half a mile away. When he turned, a cloud of dust billowed outside his home.

Advisory: Graphic content could be disturbing to some viewers.

After 17 years of war between the Taliban and Afghan forces backed by foreign troops, the violence keeps up a steady rhythm. Militants targeting the legislative elections held on Oct. 20 and Oct. 21 killed dozens. Three days earlier, the entire leadership of Kandahar was almost wiped out in an assassination attack that came close to killing the U.S. commander of the war, General Austin S. Miller.

A heavy toll has been paid by civilians in this years-long conflict. Many have been killed by IEDs, suicide bombers or airstrikes. But among the more than 8,050 noncombatants killed or injured so far this year according to the U.N., a total of 337 have been killed by unexploded ordnance left behind on the battlefield. Of these, 90% were children.

Mangal, whose right leg was amputated below the knee, on May 31 sees beyond the hospital walls for the first time since arriving more than a month earlier.
Andrew Quilty for TIME
Abdul Rashid, one of the last boys to be discharged, and Rabia rest at home. Aside from the amputations, many legs not lost to the explosion were broken.
Andrew Quilty for TIME
From left, Bashir, Mangal, Marwa, Abdul Rashid (in wheelchair), Aman and, in the distance, Rabia are helped by their cousins on July 23 to a nearby house where they attended school while recovering.
Andrew Quilty for TIME

These included the members of the Ibrahim Khil family surrounding that RPG. Shrapnel tore through their flesh, from toes to thighs. Five would lose portions of a leg, and two would lose most of both. Three, and one adult who was with them, would lose their lives before reaching the hospital. Which side was responsible, soldier or insurgent, Hamisha Gul couldn’t be certain. To the victims, it made no difference at all.

In 2008, Hamisha Gul moved his family from a neighboring district controlled by the Taliban so his children could receive an education. “Boys as young as 8 years old were carrying weapons and wearing bandoliers of bullets,” he said, outside his home in May. He feared that if they didn’t leave, his boys would fall under the sway of the fighters.

By 2014, the war had come home. Their village in Surkh Rod district had become a no-man’s-land between a government-controlled highway and the Taliban’s Black Mountain, so named because snow never falls there.

That year, international forces handed responsibility for the country’s security back to the Afghan government, and the Taliban started ­attacking Afghan soldiers stationed on the highway. Local elders pleaded with both sides to avoid battles near their homes. The fighters agreed, but nothing changed.

Bashir sits on a bed during a hospital visit by his extended family.
Andrew Quilty for TIME

On April 29, the seven children who survived the RPG explosion—all from the Ibrahim Khil family—arrived at Nangarhar Regional Hospital in Jalalabad at 7 a.m. “Muscles and tendons were hanging from their legs,” said Bilal Sayed Miakhil, the hospital’s specialist ortho­pedic surgeon. “Their injuries were so extensive that amputations were needed just to stop the bleeding.”

Marwa, 4, whose mother and twin sister were killed in the blast, lost part of her right leg. So did Aman, 5; Rabia, 7; and Mangal, now 8. Bashir, now 9, lost his left leg below the knee. His twin brother, Abdul Rashid, lost both legs below the knee. Shafiqullah, 12, had both legs amputated above the knee. Four of the boys were Hamisha Gul’s own sons.

One, Aman, was his grandson. For a month, Hamisha Gul slept on the floor of a ward where his boys were being treated. His granddaughter and niece stayed upstairs in the women’s ward. Each morning the nurse would come to clean and re-bandage their wounds.

Hamisha Gul would go from bed to bed trying to comfort them as their raw wounds were rinsed and as surgical drains were pulled from between the sutures. Their cries echoed around the room.

The days passed slowly as their wounds began to heal. Hamisha Gul would bring toys from the bazaar for the boys to play with on their hospital beds. Shafiqullah, eager not to fall behind at school, would study. Eventually it was time to leave. Abdul Rashid, one of the last to be discharged, called home on May 31 to speak to his twin brother. “We are coming now,” he said, “and we are coming with happiness.”

After they left the hospital, the extended family would travel by taxi regularly from home to the International Committee of the Red Cross’s orthopedic center in Jalalabad—first, for the injured to learn how to use crutches, and then to be fitted with prostheses.

Rabia poses in the orthopedic center on Aug. 26, her first day wearing a prosthetic. Asked if she could stand without crutches, Rabia let them fall to the ground.
Andrew Quilty for TIME

By August, the five single amputees had been fitted with prosthetic limbs. Each came with a new pair of sneakers. After their first day of training, Bashir cried as he handed his new leg back so technicians could adjust it before his next visit. Alberto Cairo, head of the ICRC’s orthopedic program, says it was “very exceptional” to see so many injured from one family. All seven have since had prostheses fitted, some by a separate NGO.

Learning to walk again had a positive effect on the children. “Since they have their legs, they are much more happy,” Hamisha Gul said in August. “They are eating more than they have in a long time.”

Abdul Rashid was assessed for surgery in late June after staffers at the orthopedic center performed an X-ray on his femurs and discovered that a severe fracture was far from healed.
Andrew Quilty for TIME
Aman and Bashir take a break from practicing on their prostheses at the orthopedic center on Aug. 26. It was the third time the boys had worn their new legs.
Andrew Quilty for TIME

Their recovery continued into the fall, and settled into a routine. They studied together in the mornings and played outside in the afternoons. The children realize now their education is more important than ever. “There is certain work we can’t do now,” Abdul Rashid told TIME. Hamisha Gul put it more bluntly: “Without education, they are nothing.”

Soon after the incident, village elders told the Taliban what happened. They said fighting around their homes has since decreased, but it hasn’t stopped completely. Two months after the explosion that injured the Ibrahim Khil family, an army explosive ordnance disposal team destroyed another RPG that fell behind the house. Young neighbors had found it.

Before the team departed, Hamisha Gul, who had been watching from a neighboring compound, called for their attention. As he approached them, he stretched out his hand and gingerly presented them with a grenade. He found it while walking home to his family.

The seven children inside their makeshift home classroom on Oct. 11. From left: Aman, Mangal, Rabia, Marwa, Shafiqullah (at rear), Abdul Rashid (in wheelchair) and his twin Bashir. Abdul Rashid, who aggravated one of his wounds while wrestling with his brothers, was the only one yet to be fitted for prostheses. Aman was waiting for his to be repaired, after breaking it while playing.
Andrew Quilty for TIME
More Must-Reads From TIME