It's Time to End the 'Breast Is Best' Myth

When my son was five weeks old, I found myself sitting on the floor of a room filled with cushions and yoga balls, holding him in my arms while exposing my nipple to a roomful of other women.

We were in the back room of a cheerful natural baby store, but there was a feeling of desperation in the group of women, each one cradling a newborn baby. This unlikely sisterhood was gathered for a weekly breastfeeding support group.

My son, Nathaniel, loved to breastfeed so much that he spent about 10 hours a day at it. But for some reason, breastfeeding had become intensely painful.

I was riding an intense wave of fatigue and anxiety, and found it hard to consider anything but finding a way to continue nursing. I would have felt like a failure to do otherwise. But on an intellectual level, I didn’t believe breastfeeding was crucial for a baby’s development.

I had read up on it, and the claims about breast milk’s supposed benefits seemed exaggerated. I decided to try breastfeeding but not put any pressure on myself. If I had been able to step back, I would have said there was no reason to put myself through the stress and pain.

And I would have been right. A recent study in Social Science & Medicine found that many benefits attributed to breastfeeding—from reduced rates of obesity and asthma to higher intelligence—have been overstated. The study compared outcomes among siblings and found no significant difference in 10 of 11 long-term health outcomes between children who were breastfed and those given formula. Most studies look at children from different families, which makes it difficult to isolate the effects of breastfeeding.

In her 2009 article in The Atlantic, “The Case Against Breastfeeding,” Hanna Rosin reviewed the literature and found that while some studies showed minor health benefits, others found none or contradicted each other.

And yet: the message that “breast is best” has permeated parenting circles and the American medical establishment. The American Academy of Pediatrics—and many OBGYNs and pediatricians—recommends that mothers breastfeed for at least a year.

Breastfeeding is now akin to providing developmental toys, serving organic meals, and limiting screen time: a parenting best practice. Lactation experts claim breastfeeding does everything from raise a child’s IQ to ward off disease. They refer to breast milk as “liquid gold.”

Even though I hadn’t developed a strong commitment to the idea, I began breastfeeding Nate shortly after he was born. He thrived, zooming to a top percentile on the growth chart. And so I nursed around the clock.

My husband helped in any way I asked, but he also (mostly) slept at night; there was no use in both of us getting up to feed Nate. Our roles seemed entirely determined by gender, and most of the responsibility fell to me.

But I watched the rolls develop on Nate’s arms and legs, and felt proud that I made them. Nate was a fussy baby but anytime I put him to my breast, he was instantly soothed.

So when breastfeeding became painful, I was conflicted. I didn’t believe my breast milk had magical powers. I desperately wanted to better share the baby care with my husband. But it was hard to think about depriving Nate of something he so clearly enjoyed.

I couldn’t get to the bottom of the problem, so I hired a lactation expert. We realized a tiny milk blister was the culprit. Slowly, the pain finally disappeared.

By the time Nate was four months old, a feeding took 10 or 15 minutes instead of an hour. And I grew to love breastfeeding. Instead of feeling like a painful sentence, it became a welcome break in my day where I got to hold and cuddle my boy.

Nate is now 22 months old, and he still breastfeeds occasionally. It is no longer a quiet, relaxing experience; he bounces around, often nursing for less than 30 seconds at a time. I think he’s starting to wean himself; he regularly goes days without nursing.

I never expected to nurse a toddler, and I’ve been surprised that I continue to enjoy it. Nate now spends much of his time running, climbing, and jumping. Nursing is a time when he wants me to hold him close, when he touches my face and chatters to me. It’s an excuse to cuddle and bond, and it’s pleasurable for both of us.

And to me, pleasure is the thing. As contemporary parents, we are so focused on giving our children every advantage that we try to justify every choice through its results. We breastfeed because we’re told that it will help a child’s development, health and intelligence. But if that’s not true, then what’s left? Pleasure. And that’s enough.

Drew Himmelstein is a writer and digital storyteller based in San Francisco. Her work has appeared in the San Francisco Chronicle, Dwell, American Craft and on NPR. This piece originally appeared at Zocalo Public Square. 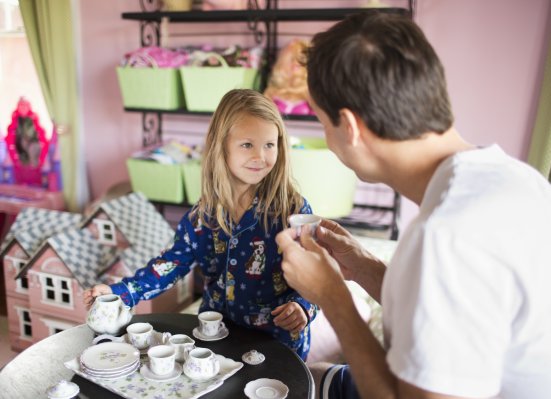