Gay Marriage Rulings Could Ripple Across the South

By Michael A. Lindenberger

Last week’s back-to-back rulings by federal judges in Kentucky and Virginia were the first to embrace gay marriage in the South, but they almost certainly won’t be the last. Similar cases are moving to trial in federal courts across the region, from Louisiana to Texas to Tennessee, in Arkansas and in both the Carolinas. Their prospects in Dixie aren’t certain, but this much is clear: They’ve never been better.

Eight months after the Supreme Court cleared the way for same-sex marriage in U.S. v. Windsor, federal judges have used its reasoning to advance gay marriage in five straight cases, including last week’s decisions out of Louisville and Norfolk. Federal judges in 17 states are facing new gay marriage cases, including at least eight states in the South, according to the LGBT rights organization Lambda Legal. Five state courts in the South will also be presented with cases challenging bans on gay marriage.

The South is home to some of the deepest objections to gay marriage in the nation. Every state in the region save Maryland explicitly bans legal same-sex unions. Until last week, no federal judge or top state court there had ever ruled in favor of gay marriage. And 11 years ago, when Justice Anthony Kennedy wrote the landmark opinion Lawrence v. Texas striking down anti-sodomy laws in 14 states where it was still illegal to have gay sex, eight of those states were in the South.

That history made it unsurprising that the Virginia ruling prompted some anguished responses. The president of the Family Foundation of Virginia called the decision by U.S. District Judge Arenda L. Wright Allen of Norfolk, who was appointed by President Obama, “an emotional outburst by a judge.” The Washington Post reported that a state lawmaker who had co-authored the ban on gay marriage called for her to be impeached.

“If you took a referendum in Virginia today, it would turn out in favor of gay marriage,” says Michael Klarman, a professor at Harvard Law School and author of From the Closet to the Altar: Courts, Backlash, and the Struggle for Same-Sex Marriage. “That might not be the case in Alabama or Mississippi, but it is changing.”

And it may change with increasing speed as retiring judges are replaced with younger appointees. “It’s getting harder and harder to find any of the younger judges on the bench appointed by Obama who can tolerate the restrictions on gay marriage,” Klarman says. “They see it as rank discrimination, and now that they have the Windsor case to draw from and changing public opinion, I just don’t think they will be inhibited any more from ruling in favor of gay marriage.”

Even opponents of gay marriage recognize the broader social shift. “We are at a fundamentally changed cultural moment,” says the Rev. Albert Mohler, president of the Southern Baptist Convention’s flagship seminary in Louisville and an outspoken critic of gay marriage. “There is a sense of inevitability in these cases.”

When gay marriage finally made it before the Supreme Court last summer, the justices sidestepped the chance to end the legal debate for good. While Windsor has since cleared the way for gay marriage, it was seen at the time as a far more cautious approach than the one many advocates had desperately hoped for: A ruling on whether California’s controversial Proposition 8, a constitutional amendment banning gay marriage, could stand. Instead, the justices dispensed with the case on a technicality. The justices will surely take into account the public mood should they address gay marriage again in 2015. “The tide of history is moving and, indeed, accelerating,” says Arthur Leonard, a professor at New York Law School and an expert on gay rights. “During 2013, the number of jurisdictions in which same-sex couples could marry more than doubled, and now close to 40 percent of the country lives in such jurisdictions. In addition, public opinion continues to move in support of allowing same-sex couples to marry.”

One reason the justices acted with caution last time was they are mindful of the risks to the court’s standing – and ultimately its legitimacy – in such a ruling. “Justice [Ruth Bader] Ginsburg was, as she signaled in some of her remarks last spring, concerned about the Court getting too far ahead of the country in civil rights decisions,” Leonard says. But those concerns have turned out to be unfounded. Indeed, the Windsor decision was followed by a series of other rulings that echoed its reasoning. “The consistency of lower court rulings striking down laws prohibiting marriage equality — in the last month in Utah, Oklahoma and Virginia — will make it much easier for the Court to come to the same conclusion,” says Erwin Chemerinsky, dean of the University of California, Irvine law school.

With Kentucky and Virginia joining more liberal states in finding for gay marriage, the national mood has clearly shifted. “It won’t be over till it’s over,” says Marc Spindelman, a professor of law The Ohio State University. “But if part of what kept the Court last year from declaring marriage equality to be a fundamental right was concern about potential political backlash to a decision making the announcement – and that hasn’t happened.”

Not even in the South. 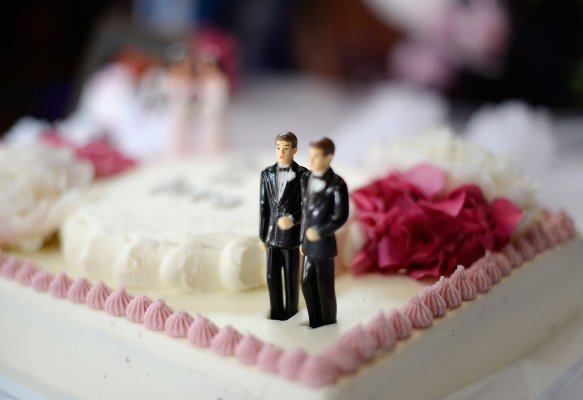